Rosalind Nashashibi at the ICA

This exhibition sees a return to the ICA for Nashashibi, the first female artist to win their Beck’s Futures prize back in 2003. Since that date her work has undergone what seems to be a significant shift in direction, something she emphasizes in an unpublished interview and in her selection of the works themselves. While retaining a focus on communal spaces or situations in which people have been brought together, more recent works seem to indicate a shift from ‘individual’ to ‘archetype’, and from anthropological documentary to the more poetic and performative aspects of her chosen medium of film.

The oldest video on display is Eyeballing, described by Martin Herbert as ‘a turning point or even a deliberate attempt to clarify her output’.1 For this work Nashashibi used her trademark Bolex camera to film police officers on duty outside New York’s First Precinct, cutting the footage with shots from the streets and her apartment in which unexpected details – windows, drains, and the like – seem to manifest themselves as faces. Given the post 9/11 context one could sense a kind of paranoia in the uncanny effect of the city spying on it’s own figures of authority.2 The city personified by architectural details is even reminiscent of early Surrealism’s interest in the forgotten spaces of Paris (and Walter Benjamin’s resulting assertion that the Surrealists were ‘the first to realize the revolutionary potential of the outmoded’)3 Against this interpretation, however, is the sheer deliberateness of Nashashibi’s practice. As with Abbeys (2006), where photographs of architecture are inverted to reveal faces, the physiognomies of the cut-to shots have all been carefully sought out and staged. This suggests less a paranoid or uncanny city, but simply the city as a kind of theatrical place, one of watching and being watched.

This idea of theatricality is made explicit in The Prisoner (2008), where the documentary aspects of earlier films such as Blood and Fire (2003) or Hreash House (2004) are totally abandoned. Instead the film uses a friend of the artist to stage a scene quoted from Chantal Ackerman’s The Captive (2000) (itself modeled on The Prisoner, the fifth volume of Marcel Proust’s In Search of Lost Time). The film of a woman’s walk down London’s South Bank is shown on two side by side projectors with a slight time lag. The loud whirring of the projectors competes with a swelling Rachmaninoff soundtrack, the resulting tension lending a strong sense of expectation or even menace to the otherwise innocuous scene. Not only is the film planned therefore, but the presentation itself puts strong emphasis on the medium and mode of presentation. Clearly we are supposed to be drawn in to the poetry of the scene, the walk displayed less as documentary than as exploration of a ‘ritual’ act.

Next door is Nashashabi’s most recent film, Jack Straw’s Castle (2009), a part commission by the ICA that is her most clearly staged film to date, using a large cast and crew to record footage based around the artist’s mother in a London park. As with Eyeballing and The Prisoner there is a kind of ‘juxtaposition of two halves, two aspects’,4 as the action jumps between the more theatrical planned scenes and those of the set up itself. This juxtaposition is also suggested in the film Footnote (2007), where footage of a reader jump-cuts to that of an ornamental garden frog as soon as she glances down to look at a footnote in the text. Taken as a whole, and in the context of Nashashibi’s professed interest in ritual and mythologising – even manifested in the title of a work partly taken from Carl Jung: Gumbi, Pasolino, Cicciolina (mythologising gives existence a glamour we wouldn’t want to be without) (2007) – the works seem to suggest how the mechanics of film can draw on the imagination to disrupt our patterns of thought about everyday situations;5 ‘an activity can change from being banal to something strange, fantastical, miraculous’.6

Having travelled through the exhibition it is interesting to come back to the first work on display, In Performance (2009), a room full of photographs of an opera rehearsal. In retrospect this work seems to set the tone for the exhibition, exploring as it does the theatrical aspects of group activity, in Nashashibi’s words ‘…the way we alter our behavior, when we feel ourselves to be acting, performing, or just being’.7 The inevitable inter-contextualisation of the other works also sets the tone, for in many of these one finds older pieces referenced (be it by re-shooting footage, reusing actors, or simply, as in Proximity Machines (2007), showing two older films with two projectors creating a split screen effect). Nashashibi has herself described her work as ‘an ongoing process of investigation’, films in which ‘the reasoning is not withheld; it’s just in development’.8 This, then, is the impression one is left with: of an oeuvre still in development, one that is constantly reevaluating and reinterpreting itself, and one that, as a result, often seems to be working to elide it’s own definite interpretation. 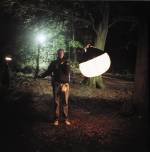 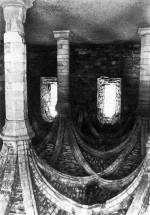