In his seminal essay ‘Avant-Garde and Kitsch’, Clement Greenberg first described the avant-garde’s necessary arrival at a ‘pure’ abstract art, the turning of art from ‘imitation’ into ‘the imitation of imitating’.1 Seventy years on this exhibition proposes a new form of abstraction in America. ‘Postmodern’ and ‘post 9/11’, these ‘knowing abstract practitioners have irony at their disposal and can switch to tie-dye aesthetics or psychedelia as fast as they can quote Malevich or Brice Marden’.2 This is said to be abstract art recast for our times of dysfunction and digitalism, an art of sampling and ‘postmodernist remix’ that is often not abstract, and which is certainly far from ‘pure’.3

These ‘remixes’ of subject matter and material appear in the work of a number of the artists. Carter fills his pictures with endless variations on ‘abstracted’ heads. Agathe Snow’s three giant crosses layer over wood, wire mesh, balloons, clothes and various other found objects. Paul Lee’s smaller sculptures include combinations of socks, light bulbs and soda cans. In stark contrast, tucked away on the top floor, are the traditional abstract artists as Greenberg would have recognised them. These artists adopt a ‘post-minimalist’ aesthetic in the case of Bart Exposito and Jo Bradley, or – as with Baker Overstreet and Chris Martin – a more casual style recalling abstraction’s roots in Surrealism and the unconscious. At these two poles, however, one can’t help thinking of the huge outputs of Robert Rauschenberg and Anselm Kiefer at one end, and Elsworth Kelly and Morris Louis at the other; is there really that much left to say in these styles, or, whatever claims may be made for ‘psychedelic updates’, does their formal rigidity mean that they’re now running out of ground?

One solution offered is total self-referential irony, whether in remaking a Jackson Pollock work using 12 ‘high octane’ motorcycles riding over stained plywood (Aaron Young’s Greeting Card 10a (2007)), or in showing a Donald Judd cube ‘swallowed’ by a snake and titled Ssspecific object (2006) (a reference by Stephen G. Rhodes to Judd’s critical writings). By not totally disavowing seriousness, however, the approach appears to bear more fruit. Peter Coffin’s giant hand leaning casually against a plinth (Untitled (Unfinished Hand) (2006)) is an amusing play on the Modernist elevation of medium and the ‘hand of the artist’. In Malus Sieversii (2008) Matt Johnson crafts a tiny Escher-like staircase in the centre of a wooden apple, a reminder of the wonder that skilful work can produce, and of its absolute compatibility with more conceptual notions of art.

A return to more traditional focus on skill is evidenced in representational paintings on display. Kristin Baker’s paintings look back to futurism in their fragmented surfaces, where layers of translucent paint break up the picture plane and provide a heady sense of the speed and intoxication of her beloved motor racing. More recently applied to history painting the technique promisingly manages to retain it’s stained glass like seduction, and her epic Raft of Perseus (2006) is a work of great atmosphere and expressive power. An excellent contrast is provided by Jonas Wood, who’s simple, almost naïve paintings recall Edward Hopper and David Hockney’s early works in their wide eyed wonder at the quiet aspects of American living. The television in Rosy’s Masks (2008) brings to mind Hockney’s Still Life with TV (1969) yet the collection of exotic masks hanging above give the painting a wonderfully dreamlike, almost quaint, quality, signalling the referential irony of postmodernism in an unusually subtle way. Even more traditional is Amy Sillman, who’s obvious pleasure in the colour and texture of oil paint combines with an eye for formal unity, owing as much to Henri Matisse as to Philip Guston, and demonstrating that one doesn’t have to be novel to create emotional effect.

Lumping all of these works together clearly doesn’t do justice to the aims and ideas of the artists; some have been especially unfair in castigating them for not actually being ‘abstract’, though more importantly it falsely attributes a shared purpose to what is a hugely disparate group. Nonetheless, placed together one does sense a certain lack of purpose at the heart of the exhibition (and seeing as only one artist was born after 1980 it would be disingenuous to credit this to 9/11). It may be that the catalogue essay unwittingly reveals something of this. In speaking of contemporary society’s worsening conditions and nihilism, artists are described as the ‘God-like creatures of the future’, creating ‘the consciousness of the times’.3 This hopeful statement seems to carry strong connotations of Hegel’s ‘spirit of the age’, and even his assertion that ‘The Great Man is he who expresses the will of his time: who tells his time what it wills, and carries it out’.4

In a society distrustful of metaphysics or all encompassing philosophical systems, however, the artist can no longer rely on an abstract goal for art (such as Greenberg’s ‘formal value’), and cannot simply hope to be the medium through which the age communicates. Many of these works want to be innovative, flippant, and ironic to be of their ‘postmodern’ time, yet in attempting to make overarching statements they always carry the risk of saying very little at all. On the evidence presented here it is often the artists willing to engage seriously with their surroundings, those whose work is still tinged with the personal as well as the Zeitgeist, who end up being able to communicate something of value.

2. The overarching themes for the exhibition are laid out in the introduction, ‘The New Atlantis: Abstract America’, in Ibid, pp. 6-9.

4. Quoted in Karl Popper, The Open Society and its Enemies, Volume II, p. 78. 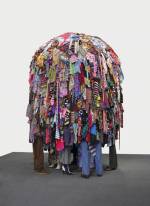