It is hard to think of any pure abstraction amongst the most famous painters in Britain today. David Hockney gave it up years ago, though even his 1980s works always seemed to be playing at figuration. Sean Scully and Howard Hodgkin could be cited, yet they always tend to carry some trace or reference to life outside the works. The popularity of Tate Modern’s 2008 Rothko show demonstrated there was a large appetite for near monochrome canvases here. Still, it is hard to imagine a writer on a British artist able to say, by way of the highest praise, “No other painter has painted as many totally black-cover canvases, but then no painter has covered as many canvases with any single colour”.1

Pierre Soulages did not begin with giant monochromes, but with smaller works, in which the play of intersecting black brushstrokes over white or yellow grounds yielded a look approaching oriental calligraphy (and in the past resulted in rather superficial comparisons with Franz Kline). In the fifties the works became larger, the paint thicker, and occasional flashes of colour appeared. Peinture 195 x 130 cm, 30 octobre 1957 and Peinture 202 x 125 cm, 15 décembre 1959 are striking examples of this, where blue or red appears within huge brushstrokes of thick, almost tar-like black oil paint. In the sixties the canvases then get even larger, and the power is only increased as the paint gets both thinner and denser. In these works the canvas comes close to complete darkness, with an apparent battle between paint and ground that could perhaps be likened to that in Cy Twombly’s more recent Bacchus (2005) series now at Tate Modern.

Given the Manichean implications it becomes tempting to read figuration into the works: to see the thick black and white vertical stripes of Peinture 202 x 327 cm, 17 janvier 1970 as an extreme close up of a ribcage, or the black over red-brown of Peinture 190 x 300 cm, 11 juillet 1965 as the silhouette of trees or buildings obscuring an evening sky. This, however, is the one interpretive possibility that Soulages is at pains to cut off entirely. In the catalogue his essay displays a strict formalism, and the main point of “Image and Signification” in fact seems to be to make explicit that the paintings “are neither image nor language”: there is no “image” to read, and there is no direct referent behind the canvas to be signified (unlike Hodgkin, the names of the pictures signify nothing but the date on which they happened to be finished).2 In fact the paintings are explicitly likened to stains and Rorschach tests that do not have a set meaning locked inside, but goad the viewer towards personal interpretations. The work of art “implies no hidden meaning, no secret clue”, but “owes its existence to those who contemplate it”.3

This becomes all the more significant when one reaches the ‘outrenoir’ paintings, the canvases entirely covered in black pigment that Soulages has painted since January 1979. In the exhibition this moment is almost literally enshrined, for to see these works one has to pass through an entirely black space, in which three black works are hung as a triptych ‘floating’ from steel wires. The lighting – designed ‘in close harmony with Soulages’ – counteracts this blackness in a way that one might at first take as an error. In fact the idea is to reveal the black as a colour itself, with the silver and yellow effects of the light inhabiting the texture of the walls, paintings, and wires, and turning a monochrome space into a burst of contrasts.

Despite using only one pigment the outrenoir paintings feature a range of textures at some times brushed in, at others apparently gouged out, all created in deceptively simple ways that in fact confound proper description (especially as the effects are complicated by the carefully planned lighting on which they rely). Pierre Encrevé relates the contrasts to the primary human experience of morning coming after night,4 while Clement Greenberg would have doubtless discussed the play of light and dark as the fundamental feature of Western painting.5 Personally the emphasis on pared down, primal experience reminded me of the patterns that remain burned onto the retinas after closing one’s eyes.

This link to primal experience ties in to another line of thinking, that which suggests that ‘For the last century the arts have not had the beautiful as their main concern, but something which has to do with the sublime’.6 This discourse of the sublime was truly rekindled after the Second World War and Holocaust’s collapsing of high modernist optimism. Such a view of art goes beyond mere disinterested aesthetic beauty, and in its intimation of the unrepresentable it suggests how it is that art can come to deal with moral and ethical issues outside of the immediate image; as Soulages himself comments, ‘behind aesthetic choices are ethical respondents’.7 For Jacques Rancière, after the recent ‘ethical turn of aesthetics’, art must now be either communally bonding (the ‘Relational’ art discussed by Nicholas Bourriaud) or must partake of the sublime, and ‘bear witness to the unrepresentable’. The ‘autonomous’ painting of high modernism has now become linked to such art, all based on a view of time that no longer looks forward to some utopian future, but backwards, to the ‘immemorial and never-ending catastrophe’ of the Holocaust.8

Read this way, the outrenoir works could be seen as well beyond the concerns of high modernist aesthetics, instead linking with a post-modern take on the work of Barnett Newman and Mark Rothko (with whom Soulages had maintained a close friendship before his suicide). The works are then another point in the search for the sublime, part of a chain of artworks that abjure direct referents and act as a spur for the viewers to look inside themselves for meaning. Rancière suggests that after the merging of modernist anti-representational art with the new and ‘unrepresentable’, a straight line can be drawn from Kasimir Malevich’s 1915 Black square to Claude Lanzmann’s 1985 film Shoah.9 In another sense perhaps, the line could be said to lead ‘beyond’ Lanzmann ‘back’ to Soulages; still a straight line, but from black canvas to ‘black’ canvas. 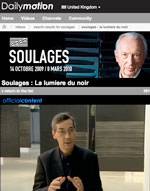