The Barnett Newman exhibition has opened and is a perfect fit with the Gallery spaces on Level 4. If Newman is pretentious, as one reviewer queried, then Tate Modern is all the more so: magnanimously the same reviewer offered readers David Sylvester's statement 'When I stand and look at it I know that the whole of art is there'; Newman professed and achieved the sublime in art

The standing and looking is best-done close-up; the way the artist himself advised. And what is significant here too is the truth that this is, of course, how he painted; not, never, continually standing back. So we have to imagine going back to the 1970s, for the real impact to be experienced. It is amazing on Level 4 how many viewers were in fact taking the long view, as if our 21st century perspective in space had already imposed such perspectives to the exclusion of all else. Barbara Reise's seminal article in Studio International (see Archive: 179:919) entitled 'The Stance of Barnett Newman' explored ways in which Newman was 'the modern Renaissance man Old Master: accepting categories through human but always re-examining and remaking them within and through his own contributions. Other artists adapt; Newman's art generates knowledge, terror, courage, pleasure, and life; expressive of a context as historically particular as it is universally timeless'. As Reise stated, Newman's standards of integrity for himself and everyone else are so awesomely wide-ranging that little has been written on him, and that that has been is inadequate and fragmentary. Perhaps what is missing from the catalogue, too, is her article, which has not been bettered, and stands today as a memorial to them both. 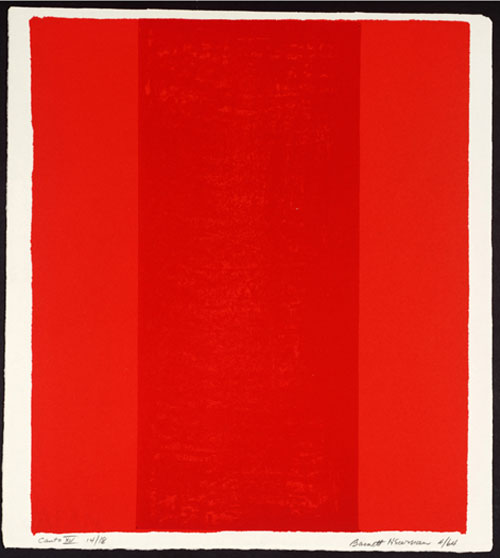 'Hocus-pocus' is how another reviewer for a national paper described Newman's work. But then if his art can nowadays be so peremptorily dismissed what about the whole gamut of the American Abstract Expressionists? Abstract Expressionists took a tragic view of history. They were the generation in America that had survived the great Depression of the 1930s. Generally, the abstraction was not intentionally religious, spiritual, or mythical. But the closer you stand, the more you become immersed - which is what was intended. Newman only painted some 120 works and the Tate has about two-thirds on display.

The present curators of the exhibition have very wisely brought together not only the Stations of the Cross: Lema Sabachthani (1958-66) the series of 14 paintings that confront terror, even Newman's own anticipation of death. (The series has never previously left the National Gallery of Art in Washington.) They have also brought together, in dramatic contrast both to that and to each other, the later two triangular paintings, Chartres 1969 and Jericho 1968-69. Helpful in the understanding of Newman's work is the presence of five sculptures, plus graphic works.

As Newman himself claimed, 'I called one painting Chartres because of the strong assertion of my inner structure in contrast with the outside format and because of the even light in the painting which has for me the evenness of Northern light - a light without shadows'. Newman said that the title Jericho 'explains itself'. But 33 years later, in London of today, explanation is bound to be needed, more so to school groups and on audio aids. 'Could I do a painting on the triangle that would overcome the format and at the same time assert it? Could it become a work of art and not a thing?' Today, ironically, we are more at ease again with Newman's scale. Don Judd, in his article in Studio International, claimed presciently that, 'Newman is asserting his concerns and knowledge, He couldn't do this without the openness, wholeness and scale that he has developed. The colour, areas and stripes are not obscured or diluted by a hierarchy of composition and a range of associations. The few parts, all equally primary, comprise the quality of a painting'. Judd claimed at the time (1970) that 'despite the difficulties of comparisons and the excellence of the work of Rothko, Noland and Stella, it's not rash to say that Newman is the best painter in the country'.

Newman's Onement I painting of 1948 is recognisably the point of departure for all that followed. His recognition of human scale here is definitive, and it is good to see Newman's chronology asserted through this painting. Here the 'zip' vertical band began - a kind of signature on one level. Unfortunately this painting is absent from this retrospective.

This outstanding exhibition can never be seen as a part of a circuit that will swing around again. Newman 's presence in London, through his works, is momentous. The paintings are somehow revalidated by the events of 11 September 2001, as relevant to London as to New York. The exhibition succeeds the Tate exhibition of 1972. Jeremy Lewison, a contributing curator, whose swansong this exhibition is, has left a memorable marker, possibly the best painting exhibition that Tate Modern will have mounted in a decade. It seems unlikely that these masterpieces will again be on show in Britain within a generation. 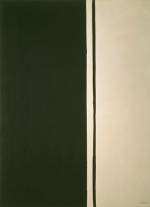 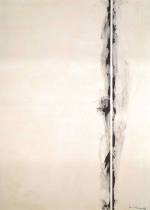 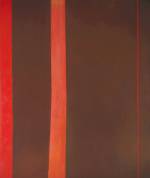 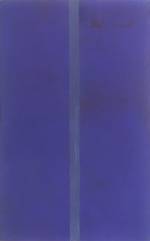 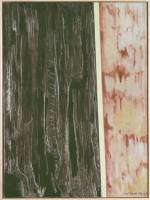 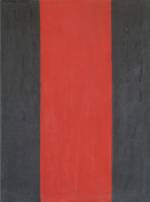 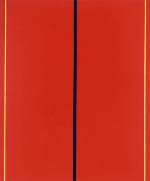