David Hockney: Painting on Paper at Annely Juda concentrates on the artist's dynamic new use of watercolour. The main part of the exhibition is made up of nine large landscapes inspired by the artist's recent trip to Norway and Iceland. Also included are portraits of friends, studies of bonsai trees and a number of line drawing portraits. A fully illustrated book, David Hockney: Painting on Paper has been published by Annely Juda Fine Art to accompany the exhibition.
The National Portrait Gallery in London has on display a selection of new double portraits by Hockney. The centrepiece of the works is the portrait of Sir George Christie and his wife Mary, commissioned by the National Portrait Gallery. Hockney has been a friend of the Christies since the 1970s when he undertook stage designs for John Cox's Glyndebourne productions of The Rake's Progress (1975) and The Magic Flute (1978). Sir George Christie was Chairman of Glyndebourne Productions for over forty years. The portrait commission became the catalyst for a larger series of watercolour double portraits of Hockney's friends.

Last summer David Hockney sat for Lucien Freud whose working method is somewhat different to Hockney's. Freud required Hockney to sit for 120 hours in all. Hockney's portraits on show in London at present, on the other hand, are done in a single sitting. Using the traditional medium of watercolour, Hockney employs quite a different approach. Arguably watercolour was never intended in the manner in which Hockney has recently employed it. Hockney writes,

Each couple in the double portraits are seated on the same swivel chairs, against the same floorboards. Four sheets of paper are placed together so that the overall size is over a metre high (one large sheet would buckle under the weigh of the moisture in the paint). Watercolour is not, however, an easy medium for portraiture, or on this scale. Where oil paint can be scraped and overpainted, any mark in watercolour cannot properly be removed. Overpainting becomes muddy, the paper support can be damaged. Watercolour is ideally suited to small-scale landscapes - the washes revealing light and suggesting atmosphere. Hockney has chosen watercolour however, for its fluid, quick application in order that the 'double portrait', is captured in a single sitting as opposed to the separate sittings of each individual (traditionally used in a double or group portrait). Hockney's ambition is to capture the connection between his sitters. Hockney's friend, Marco Livingstone, the subject of several portraits and the author of the essay in the Encounters catalogue (National Gallery, London, 2000) has written, "Sitting for Hockney", in the new book. In it he reveals many of the artist's motives and methods:

David Hockney has always been a fine draughtsman and committed to traditional skills in art. He has for years now campaigned for figurative art. Although he always placed great importance on drawing and painting, he has also been interested in experiments in photography and computer assisted art. Some three years ago Hockney quite amazed the artworld with his publication of Secret Knowledge (Thames and Hudson, London). His study revealed that the Old Masters of Western art had often used optical devices.

The Twelve Portraits After Ingres in a Uniform Style (1999-2000), shown in the National Gallery's exhibition Encounters in 2000, consist of twelve portraits of uniformed National Gallery attendants. They were drawn from life in Hockney's London studio between 16 December 1999 and 11 January 2000. As with the present works on show, these portraits were drawn in a single session lasting between three and five hours. They are lively, intense and individual.

On his return to Los Angeles, Hockney began to play about with his drawn images, photocopying and enlarging parts of the drawings.

In the late 1970s Hockney became intensely interested in the work of Ingres - especially in his technique - believing that Ingres might have used an optical device known as a camera lucida, patented in 1807. It was, Hockney believed, used to create a quick likeness of a sitter unknown to the artist. It is, "essentially nothing more than a small prism (mounted at the end of a metal arm) through which the subject is refracted and reconstituted as a virtual image on a sheet of paper". 4

Hockney corresponded with a number of people on the subject, including art historian Professor Martin Kemp (University of Oxford), whose book The Science of Art: Optical Themes in Western Art from Brunelleschi to Seurat, (London, 1990) was of great interest to Hockney. Hockney drew Kemp's portrait with a camera lucida on 22 June 1999. By the time Hockney returned to London in December 1999 to work on the National Gallery portraits, he had produced some 280 drawings with the same device. Hockney then wrote his radical and controversial Secret Knowledge to consolidate his research into the use of optical devices and lenses used by artists from the Renaissance to the nineteenth century. As Livingstone points out, the camera lucida enabled Hockney to learn a great deal about the topography of faces. As the present exhibition shows, Hockney has been an accomplished portraitist from the 1960s (the ink portraits display his great skill and senstivity to the sitter). The work he did with the camera lucida enabled him to work with a great variety of individuals, to scrutinise faces of all ages and types.

In the Foreword to the beautiful book published by Annely Juda to accompany the exhibition, David Hockney: Painting on Paper, (London, 2003), Hockney points out that after the publication of Secret Knowledge, that further optical experiments were carried out and a film made for BBC Omnibus. Hockney's conclusion was that "the hand is now returning to the camera, through the computer. It all leads me back to painting". The artist acknowledges that two exhibitions were importance influences on his new body of work: the exhibition of Chinese Painting at the Metropolitan Museum in New York (March, 2002) and The American Sublime (March 2002) at the Tate Gallery, which he attended three times. Hockney has always been attracted to the open spaces of the American West. In the nineteenth century paintings on show at the Tate, he identified that there was in fact a quality missing. He realised that it was concerned with the fact that the task of the artists and photographers who accompanied the geological expeditions into the new frontier, was primarily to 'record'.

In its infancy, photography then only 20 years old (1860), was revered as being able to capture 'truth'. Painters consequently imitated photographers and in doing so removed any sign of the brush, or the artist's hand. The same occurred in Academic painting in France and yet, from about 1860 artists such as Monet and Cézanne put texture and subjective response back into their painting. A major influence for Impressionist artists was Japanese art, a non-Western view. It is to Chinese art, with its bird's eye view that Hockney has recently turned to for a more 'human' touch or evocation of landscape. His choice of other subject matter, bonsai trees, cherry blossom, and his feel for the decorative elements of a picture all support another way of seeing from the tradition Western view.

For his new work Hockney travelled north to the land of the midnight sun for a series of paintings of Norway's dramatic landscape.

In addition to his boldly experimental watercolour portraits Hockney is exhibiting his landscape paintings of Norway and Iceland. Using saturated purples, violets, blues and greys for mountains and fjords these works are joyful and decorative. There is something here of Milton Avery - the tonal harmonies and evocation of the sublime in landscape, but also of the haunting solitariness of Edvard Munch.

The present exhibition and new publication assert David Hockney's intelligence and integrity as an artist. The ink portraits assert Hockney's importance as one of the leading figurative artists working today. The fact that he was not satisfied with the works produced using an optical device, and prepared to tackle a new and technically demanding body of work shows that he is never complacent in his achievement. 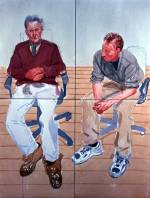 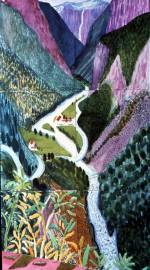