Video artist Bill Viola's work reinforces the notion that a work of art will only yield its deepest meaning after long contemplation. The understanding of a work in this view requires discipline - neglecting to give rightful attention leaves the viewer with a sense of neglect or guilty of superficiality. The intangible, deeper meaning seems only available to those prepared to adhere to such rules. Viewing 'The Passions' by Viola at the National Gallery, London could take several hours; the slowness of the pieces and the number on show made the exhibition, for many, to be more of an endurance test than a captivating experience. Several critics longed for a fast-forward button.

Bill Viola is the first living artist to be given a major retrospective at the National Gallery. Director of the J. Paul Getty Museum, Deborah Gribbon who organised the exhibition first in Los Angeles wrote in the foreword:

This exhibition of a contemporary video artist is an unusual event for the Getty Museum and The National Gallery, which are mainly devoted to showing art of the past. Both institutions, however, jumped at the chance to present Bill Viola's most recent works, since they not only give the audience a stirring experience, but also form a chapter in the long and fascinating history of artists reinvigorating themselves by studying the works of their artistic forebears. The Three Pinakotheks in Munich, too, were eager to take the opportunity to show Bill Viola's work in their galleries, which cover the history of the visual arts from the Middle Ages to our own times. Mounting Viola's work amid so comprehensive a collection provides an especially appropriate atmosphere in which to consider Bill Viola's dialogue with the old masters.1

Bill Viola's work satisfies the kind of criteria that a National Gallery audience might require. His work is unquestionably serious and yet, as video art, it is accessible. By combining new technology and painted images Viola brings an element of surprise to the Old Masters. Using actors to recreate great paintings, Viola can construct what was impossible, even miraculous in traditional media. Where a painting is always still, an image suspended in time, Viola's video characters blink, tears flow, reality feels but a breath away.

In the National Gallery's Millennium exhibition, 'Encounters, New Art from Old', in the summer of 2000, Bill Viola was one of 24 artists chosen to create a dialogue with a work of art in the gallery's collection. It was a brilliant, albeit uneven exhibition, exploring the creative process with art from the past. Viola produced one of the finest, and indeed most popular, pieces in the show. It was a slow motion video of a group of five people experiencing a perplexing and highly emotional state. The juxtaposition and interaction of five figures against a quite neutral background was filmed under a painterly light. 'Quintet of the Astonished' was inspired by 'Christ Mocked (The Crowning with Thorns)' by Hieronymus Bosch. Both works are included in the recent National Gallery show. In his essay for the 'Encounters' exhibition catalogue, Marco Livingstone wrote,

In an interview with National Gallery director Neil MacGregor in August 1999, Viola described Christ in the Bosch painting as the calm at the centre of the storm, a source of inspiration for the individual who can stand securely in whatever turbulent situation he may find himself. He seems to have been attracted to the painting at least in part because of the way it expresses this state of being, having himself often proposed self-containment, even to the extreme of withdrawal from the outside world, as a prerequisite for self-knowledge.2

The works in 'The Passions' were conceived during Viola's long residency at the Getty Research Institute in California. 'The Passions', Viola's most overtly religious show to date, addresses spirituality in a secular age. Viola bases video works on paintings that, when they were made, were devotional as well as aesthetic in purpose. The video works are a supreme affirmation of technological brilliance.

[Viola's] work for some time has been concerned with what might be called a non-specific spirituality that draws on his own experience of Zen Buddhism, as well as the sense of profound absence after his father's death. His work is singular in its insistence that contemporary conceptual art can have a meaning and significance in our lives above and beyond the shocking or the ironic, the social or the purely aesthetic.3

Movement in Viola's video pieces begins so slowly that the images could be mistaken for large, painterly photographs. In 'The Greeting' for example, modelled on Pontormo's 16th century altarpiece, 'The Visitation', 40 seconds is stretched to ten minutes. A smile unfolds slowly, fabric ripples subtlety. Produced in 1995, this is the earliest of the artist's work in the exhibition, and the first in which Viola moved from self-explanatory works to rehearsed narratives and images created by actors. In 1996 Viola became the first video artist to be commissioned by the Church of England. 'The Messenger' was the result of the commission and was later shown in Durham Cathedral.

In 1998 Viola was a visiting scholar at the Getty Research Institute. Together with a group of art historians and scholars he took part in a study programme entitled 'The Representation of the Passions'. Central to their investigation were the issues surrounding the expression of extreme emotions. Viola's personal background lay in Eastern mysticism, Hindu and Buddhist writings. The group studied the Christian mystics of the late Middle Ages, and the history of Western medieval art. Viola read Henk van Os's The Art of Devotion, Jennifer Montagu's essays on the representation of emotion since antiquity, Darwin's writing on facial expression, and a book by Victor Stoichita on visionary experiences in Spanish painting. During this period at the Getty, Viola made many diary entries and long lists of his interests. He also made copious notes for future projects — amassing some 70 projects for future development.

The year at the Getty was intense and productive. Viola took part in weekly seminars, gave talks on his work and regularly visited the Getty Museum's collection. He was mostly preoccupied with religious paintings of the 15th and 16th centuries (Dieric Bout, Andrea Mantegna) and works with which he experienced a mystic intensity such as a small painting by Casper David Friedrich of a man contemplating a historic tomb. It was during this time that he was invited by the National Gallery in London to produce a work for 'Encounters'. Viola was already familiar with 'Christ Mocked' by Hieronymus Bosch. He described a possible piece that in fact was very close to the final piece, two years later:

'Quintet for the Astonished': odd but careful spatial grouping, horizontal aspect ratio, high-speed film, delicate lighting, wardrobe character types, Bosch's 'Christ Mocked' in the National Gallery of London, the shifting surface of emotion and relation. Individuals run through a compressed range of conflicting emotions from laughing to crying, shot in high-speed film, displayed in high resolution, pristine, hyper-real. The emotions come and go so gradually, it is hard to tell where one begins and the other leaves off. Relations between the figures become fluid and shifting.5

These ideas, conceived in 1998 during the intense period of research at the Getty, later generated many of the ideas and visual imagery of the work in 'The Passions'. In London, the exhibition prompted a mixed reaction. A number of critics believed that the video medium was inappropriate for religious contemplation. Charles Darwent, a self-professed atheist and hardened Greenbergian believed that:

things have changed in the 500-odd years between Piero and Bill, not least in the way we consume our images. The making of a pre-della panel inspired (and continues to inspire) a kind of awe in the viewer which the making of an LCD screen just does not do. Merely grafting the one onto the other isn't going to rekindle that awe. When Viola does this most slavishly, the results are so kitsch as to make you blush.6

Viola's narrative of 'Catherine's Room' Darwent describes as forging an uneasy alliance between the aesthetics of San Marco in Florence to those of 'Finding Nemo'. Adrian Searle found Viola's comments on his own spiritual beliefs and religious views unsatisfactory and unsympathetic.

Viola and his friends lather on a goo of world religion and a pot-pourri of 'thought for the day' bons mots that I really don't want to hear about. I feel like I'm being given a spiritual shakedown. It all just makes me want to run away … to whoever it was who once called him the Rembrandt of the video age. He isn't.7

He was a great artist as well as playwright and novelist. His work said more about life and art and death than Viola ever has. And he never told anyone what to think or feel, much less what - if anything - to believe.8 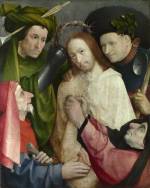