Mark Rothko: the 'end of philosophy, the beginning of art'

Mark Rothko: the 'end of philosophy, the beginning of art'

The current exhibition at the Tate Modern enables Studio International to focus on the critical and cultural backdrop to the artist Mark Rothko and his work. Previously, we have included, from New York, an article by our regular reviewer Cindi di Marzo on the circumstances of Rothko and parallels in earlier American history. The enigma of Mark Rothko's remarkable work of the later period persists, in terms of his transcendental abstraction. The gift of nine massive and monumental murals to the Tate Gallery, received there on the day he committed suicide (25 February 1970) has merely enhanced, even sanctified, his special standing in 20th-century art. But this also helped to embellish the mythology of Mark Rothko, veering from martyrdom to artistic sainthood, amidst a welter of critical confusion. The current show at the Tate Modern includes the hanging of a cycle of some 15 paintings and includes the 'Four Seasons' paintings which have here been subject to the most moving and appropriate reappraisal. However, the then critical background in New York could best have been described as warring at the time. And not particularly sympathetic to Mark Rothko himself when he was still alive.

Studio International entered the fray obliquely at this time, seeking out the critical core of the debate in New York. In 1969, the teacher and critic Joseph Kosuth wrote three key articles, published in the last half of 1969, which deeply but subtly revealed the underlying causes of the intellectual turmoil and upheaval in the New York world of discourse.1 Kosuth cleverly avoided directly involving Mark Rothko's work there. His first essay was entitled Art After Philosophy; the reasoning behind this based upon Kosuth's recognition of an evident long-term decline in philosophical discourse to a secondary activity as one generating mere historians of philosophy, that is, in the vein of 'nothing more to be said'. Hegel had set out the backdrop for this decline. Kosuth claims that the 20th century had brought in a time which could be called the 'end of philosophy and the beginning of art.'2 In this article, Kosuth dismissed continental philosophers, with the exception, of course, of Hegel. There also emerged Kosuth's own personal and distinct preference for conceptual art. Defining 'the function of art', Kosuth quoted Donald Judd (1965) who had said, 'Half or more of the best new work in the last few years has been neither painting nor sculpture';3 Kosuth develops here this opportunity to discuss the actual separation between aesthetics and art.

Interestingly, Kosuth identifies some views of the British philosopher A.J. Ayer, favouring the status of empirical propositioning. He gives the example of Richard Serra in that sculptor's denial that his work is art and his belief that 'arthood' is reached empirically. An object is only art when placed in the context of art. Kosuth claims that, '... art's ability to exist will depend not only on its not performing a service - as entertainment, visual (or other) experience or decoration - ... but, rather, it will remain viable by not assuming a philosophical stance; for in art's unique character is the capacity to remain aloof from philosophical judgments'. Kosuth says that, 'In this period of man, after philosophy and religion, art may possibly be one endeavour that fulfils what another age might have called "man's spiritual needs". Or, another way of putting it might be that art deals analogously with the state of things "beyond physics" where philosophy itself always had to make assertions ... Art is the definition of art'.4

It is this special quality of Rothko's later work that is most apparent at the Tate Modern. Whereas any personal experience of the subliminal paintings in the chapel at St. Thomas University, Houston bears this out, with these solemn yet deeply moving works, it is only when confronted by the searing reality of this ensemble 'in situ' that the effect can be felt, and this, of course, was impossible by its very nature for the curators at the Tate Modern to achieve. As previously stated, when defining the function of art, Kosuth quoted Donald Judd.3 The works at Houston, combined with their architectural container, do comply with this view. Mark Rothko does not figure in Kosuth's article, but his work of the 1960s, as duly represented at the Tate Modern, absolutely substantiates the argument set out by Kosuth. As early as 1947 Rothko had participated in the collaborative journal Possibilities in New York, published that winter (only one issue ever made it). This also included statements by Robert Motherwell and Jackson Pollock. By 1949 Rothko's striated, colourful paintings had become works which were enigmatic in their figure-ground content, sustained by the richness of that colour. The previously quoted statements of Kosuth4 highlight the basis for Rothko's antipathy to the milieu of the Four Seasons restaurant (art as a backdrop to high level consumption) and the good fortune of the Tate to receive Rothko's legacy of these works.

Joseph Kosuth's three-part article was a most timely contribution to the contemporary debate in New York and London. Kosuth at the time was founder and director of the Museum of Normal Art there (1967) and a member of the Faculty of the School of Visual Arts, New York City. 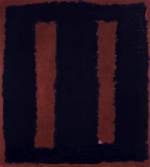 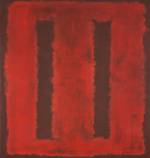