The enigma of Gerhard Richter is not here resolved by Tate Modern’s new exhibition. Yet the exhibition is, as is now usual at Tate Modern, very well curated 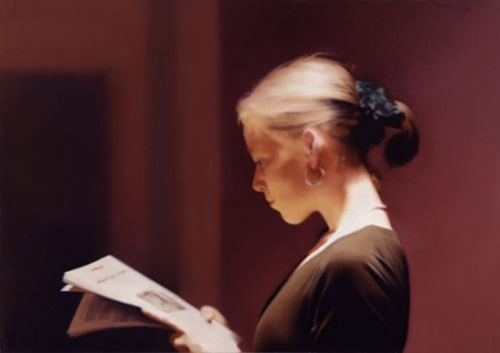 As would seem very appropriate to Richter’s multifarious range of art, different groups of work, according to genre, are sub-divided more or less typologically with definable boundaries to categories by room, and follow accordingly a chronology to fit. Perhaps it is the method of this sub-division by rooms that jars. Despite an admirable pocket “room-by-room” guide the so-called panorama of work seemingly becomes linear and constricted, denying inevitably the full generic search for creative freedom from critical interference that Richter has always sought to achieve.

Basically this is an organisational-spatial problem related to the layout of the rooms, which it is hoped will not recur in the subsequent venues in 2012 in the same way. Hopefully, in the two subsequent venues, the Neue Nationale Galerie, Berlin (12 February–13 May 2012) and the Centre Pompidou Paris, (6 June–24 September 2012) there will be somewhat different solutions. The ample catalogue seems to anticipate such an outcome being non-specific over the disposition of the works overall.

Now approaching Richter’s 80th birthday (born 9 February 1932) it would surely seem right to have covered his now well-regarded East German pre-1961 work, before, that is, he embraced freedom by escaping (through a complicated and intricate route via Berlin) to West Germany. On this account the level of accomplishment of his early paintings and state murals (well-documented but few have survived) could indicate to anyone the remarkable talent already reaching out for that freedom. The Berlin venue hopefully might include at least a summary of the artist’s development during that period. At MOMA, Robert Storr’s text Beginnings covered this, albeit with brevity referring in particular to the two major state-sponsored mural works, which Richter recalls. Overall hauntingly adverse wartime childhood experiences near to and in Dresden, a city engulfed in flames of retribution, steeled him in good preparation for the contradictions and intellectual quagmires, snakes and ladders, of the capitalist art world into which he was to become immersed, on escaping the opposing world of Stalinist cultural dogma in the DDR. He soon realised then too the over-weaning contemporary tendency to categorise art and artists under the influence of the burgeoning curatorial and commercial realms of galleries. But his astute sense of survival drew upon deep reserves of irony and doubt and his work advanced and duly prospered following his early settlement in Düsseldorf after the 1961 “relocation”, as the artist came euphemistically to describe it.

Here at Tate Modern, the sequence of gallery “rooms” initiates with Room 1 dedicated to Richter’s later 1960s spread of photo-painted source material taken and parodied from commercial designer and lifestyle magazines. In Room 2 are hung the results of his seminal encounter with the work of Marcel Duchamp at an exhibition in 1965. Richter’s explorations of glass as a medium follow, as do the abstracted “Colour Charts”, reflecting “Pop” product colouring. Room 3 finds by contrast a series of “damaged landscapes”, which reflect Richter’s own recall of collapsed, bombed urban townscapes. Also grouped here are certain distortions of romantic landscape painting conventions, so distancing the artist, from any such presumed mitigating tendency.

In Room 4, Richter’s critical exploration of “greyness” prevails, as he said: “grey monochrome paintings were the only way for me to paint concentration camps. It is impossible to paint the misery of life except maybe in grey.” He is addressing the issues, which the silent majority in his homeland has always sought to airbrush away from history. Abstraction is the direction followed through from the previous rooms climaxing in Rooms 6 and 7. Portraits are allowed in by Room 8 followed by Room 9, dedicated to covering images of the Baader-Meinhof terrorism episode, which so shook Germany in late 1977.

Grey paintings again prevail as if to provide a “placebo”; Room 10 (the largest of all) offers well-coloured, painterly abstracts; Room 11 interrogates the core role of painting per se and this dedicated experimentation continues through Room 13 to the present. By way of diversion Room 14 is a highly enlightened and rigorous discourse through painting on the work of the composer John Cage. However, it is Room 13, which is effectively the closure of the exhibition sequence, dominated by the painter’s undoubted masterwork, September (2005), which covers the earlier attack on the New York World Trade Center Twin Towers. Vaguely discernible in that brilliant Manhattan blue-sky tone, is the dragged, beclouded impact of the death-strike. Paint is drawn across fouling the blue like a veil. This work too draws together Richter’s lifetime skills with paint as a medium, to express a despair, far more trenchant than the silence, which enfolds it. It is the history painting to end all history.

Where Tate Modern’s curators have been so ingenious has been throughout such a sequence of galleries to interpose, as intervals, wholly figurative works emphasising by contrast just that developing experimentation he made with painting. The important ancillary role of photographs is maintained as such. Richter’s long-tested principle of indeterminacy enables the integrity of all the work to be sustained, even in the initial 1960s period, of family resettlement in Düsseldorf. His inherent suspicion of any “zeitgeist” embrace, decade after decade, enabled him to reach a clear accommodation, both with Robert Storr of the landmark New York MOMA show (2002) and in the two important and revelatory exhibitions that followed, that in the National Gallery, Edinburgh (2007) and that at the National Portrait Gallery, London (as reviewed by Dorothy Feaver here, Gerhard Richter Portraits, March 2009 and Studio International Yearbook, Vol 208 No 1031, pp82–87).

As Feaver stated here in referring to the Self portrait (1996), also at Tate Modern:

Richter presents himself with eyes cast down and all detail erased. The oil paint is thick and dark, as if covered by layers of ancient varnish and he has taken care to dab whitish scuffmarks around the edges. Mimicking an old museum piece, the artist views himself, a flicker in suit and tie, through the prism of art history – art history being finally, and inescapably his subject.

He remains withal, the consummate 21st-century master. The historical cultural shifts between East and West, the competing commercial pressures in the world of exhibitions, the postmodernism which only reinforces and revives the continuum of modernism, all are grist to his universality. It is timely to pursue the exhibition on to Berlin (a more testing venue for Richter on his 80th anniversary), the city through which he and his wife got out West. And even to Paris, yet another modality (from Duchamp to Jean-Francois Lyotard) can reveal further influences on this emerging master of the universe of art. Our key contributors are invited to weigh in here in next year. 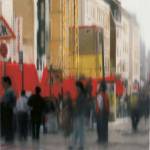 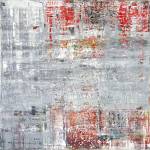