This is a substantial selection of work, a broadly chronological arrangement from throughout his career, sublimated by Stanton Williams’ sensitive exhibition design into a total experience 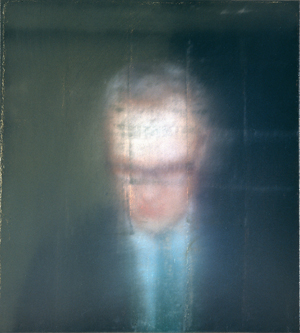 Last autumn the Serpentine hummed with Gerhard Richter’s latest sequence of wine-gum grids, variations on his design for stained glass in Cologne Cathedral - a blithe antechamber, perhaps, to the cool retrospective of Richter’s portraiture now on show at the National Portrait Gallery (NPG). This is a substantial selection of work, a broadly chronological arrangement from throughout his career, sublimated by Stanton Williams’ sensitive exhibition design into a total experience. Elegant rectangles of light glow like alter windows down into the five sections by which the retrospective is organised, ‘The Most Perfect Picture’, ‘Devotional Pictures’, ‘Continual Uncertainty’, ‘Private Images’ and ‘Personal Portraits’ - all portraits that are copied from photographs. 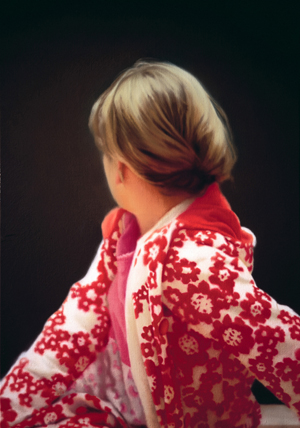 From the start Richter set his course on the modernist grail, to escape the representation of reality, and make ‘the most perfect picture’ a thing in itself - something that requires the mechanically reproduced to act as intermediary between artwork and world. Appropriately, mediating between exhibition and collection, the NPG has hung 48 Tafeln (1998) in ascendance beside the escalators in the main entrance. Heroes of modern culture, from Mahler to Kafka, H.G.Wells and Stravinsky, are rendered homogenous in individual panels. This is a bank of white men in suits (more magistrates court than magisterial). The panels are in fact not paintings, but photographs of the 1971-2 originals, and as such, present an exercise in excessive mediation. The status of the photograph as intermediary is already destabilised: what we have is an ongoing sequence of interactions between different media. 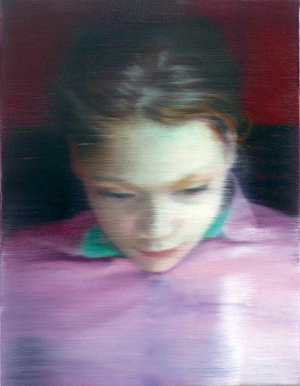 Once among the paintings, the minimal display highlights contradictions at play in Richter’s work. The earliest works on show (from around the time that Richter escaped the East to West Germany) are of course derived from black and white photographs. Insistently impersonal, monochrome canvases bleed into the white of the walls, merging in an all-enveloping swathe of grey. ‘Grey is the epitome of non-statement’, Richter claims, ‘it does not trigger off feelings or associations, it is actually neither visible nor invisible. Its inconspicuousness makes it suitable for meditation, for illustration, and in that way virtually as an illustration, and in that way virtually as an illusion, like a photograph.’1 This itself emerges as something of a non-statement, for even Richter’s ‘inconspicuousness’ amounts to a palpable atmosphere. 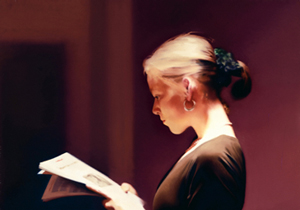 Richter extols the objectivity of photographs, snipping readymade images from magazines and newspapers, devoid of personal content - yet the ephemeral proves to be rife with narrative. Helga Matura mit Verlobtem (1966) is all the more gripping for the disjuncture between one’s assumptions and the back-story. A coiffed and strong-calved woman puts a protective arm round a small lad in Sunday best: seemingly mother and son, the image is actually from a feature about a prostitute (later murdered) and her fiancé. The newspaper cutting is blown life-size, soft around the edges and with faces obscured. Rather than masking the subject, blurry brushwork heightens the intrigue. Conversely, it requires a steady hand to bring out the fallibilities of photography - distortions at the edges, the out of focus, surface damage, a wobbly grip. Firm and gentle, Richter feathers a wet brush over the surface of a painting, blurring the image beneath; the subject recedes, as if viewed through the mists of a Caspar David Friedrich. The distance between viewer and source material is immeasurable. It has a certain romance.

Walls are kept pure by refraint from labelling, and visitors move slowly, clutching their guides like a book of common prayer. Progressing through the chambers along the spinal cord of the corridor, visitors’ reflections flicker across a large mirror on the end wall, a flat image that is forever changing. As a punctuation mark, Mirror (1981) might be hoped to provide a visual ellipsis as you leave the exhibition. It seems unnecessary, and horribly obvious. The ghost is the machine is most adroitly handled in paint.  By the 1970s Richter was following technology’s lead and introducing colour, thus making room for inconsistencies to flower. Professing repulsion for the specific and personal, one of the most memorable images on show is also one that deals most brilliantly with the subject. The portrait of Gilbert and George(1975) explores the overlaps between the double act and their art/life brand by positing them amid multiple exposures. Among translucent layers, Gilbert’s left ear and George’s right ear meet in the middle, as if conjoined on a phantom face. It is a touching, eerie twist. Having suggested that a picture’s object-hood is threatened by focus on a personal subject, more recently a self portrait (1996) seems to question the need for such rivalry by bringing the painting’s materiality to the fore. Richter presents himself with eyes cast down and all detail erased. The oil paint is thick and dark, as if covered by layers of ancient varnish and he has taken care to dab whitish scuffmarks around the edges. Mimicking an old museum piece, the artist views himself, a flicker in suit and tie, through the prism of art history - art history being finally, and inescapably, his subject. 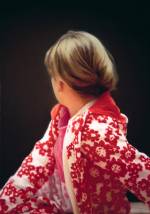