Constable Portraits: The Painter and his Circle

Constable Portraits: The Painter and his Circle

This spring the National Portrait Gallery (NPG), armed with a little trowel, unearths lesser-known works from the oeuvre of one of Britain’s greatest landscape painters, John Constable. Portraits were a steady fallback argued Golding Constable, whose portrait from 1815, shows him with a decidedly sturdy countenance, in a waistcoat firm as a sackful of corn. An erstwhile mentor, Joseph Farington RA, noted: ‘His Father has consented to his practising in order to profess Painting, but thinks He is pursuing a Shadow. - Wishes to see him employed’ (29th June 1801). Although he returned to portraiture throughout his career, it was more often than not in sporadic batches. 1806 was an unusually prolific spell. Sideburns figure on John and his younger brother Abram with a generosity unequalled by the NPG’s decision to shave out a theme. The exhibition pieces together something of a family album, or a set of fashion cards.

Reliable employment yielded moments of the methodical. The Barker Children (1809), for example, has little Robert centre-stage, a truculent toddler staring from between patient older sisters. He sports the exact same red booties and odd little boy décolleté last seen on Robert Crawford some five years before, a painting that is not included in the present exhibition. There are gleams of signature vocabulary, as in the close-up of sister Mary, whose tender solidity is quickened by a dab of red on the eyelids – those same red dabs, like smoldering match stick ends, that make the landscapes fizzle. Yet from affectionate keepsakes of loved-ones to the expedient commissions, the portraits are rarely adorned by setting.

Summer ‘06 and a trip to Brathay Hall in the Lake District brought Constable into contact with Wordsworth and Coleridge, but directed by commission, it was the wealthy amateur writer Charles Lloyd that Constable happened to immortalize, a picture of romantic gloom. A sketch of a musical party engenders a particularly longwinded label: ‘It is not clear why Constable, ostensibly a dedicated painter of landscape, produced such a quantity of figure studies. One explanation is that he intended at this point to follow a career as a specialist in group portraiture and conversation pieces…they also, however, seem to show signs of sheer pleasure in recording his human surroundings.’ It would be equally plausible, and less verbose, to imagine Constable shielding himself from the discomfiture of flirting over the piano by pencil and paper.

Real pleasure enters with Maria Bicknell. From the earliest drawing here (1805-9), paper blushes with pencil. Over seven years’ courtship Maria retains the same spaniel-like charm and eminently pettable head. The portrait from 1816 – the year that Golding died, bequeathing John enough income for marriage - takes on an iconic status. John wrote to Maria, ‘I am sitting before your portrait, which when I took off the paper is so extremely like that I can hardly help going up to it. I never had an idea before the real pleasure that a portrait could offer’ (28 July 1816). So the family album takes on its own poignancy. Children appear: a baby (1819), resplendent in a just-fed stupor, all plump wrists and fat cheeks. Maria disappears. Fourteen-year-old son Charles (1835-6) sits in a comfortable slump, letting his book slip, dreaming of the open sea (he had just entered as midshipman on an East Indiaman).

Just married, Constable made a determined effort to bolster his living: 1818 is another peak of batch production. Mrs James Pulham Sr is more turkey than pullet in her silk dress, whose collar peels back like an overripe fruit. On an opposite wall, Reverend Dr John Wingfield, master of Westminster School, sits strict in horsehair wig, the wings of his collar clean as new leaves of paper. Next to him Mrs Edwards and her mother Mrs Tudor are wrapped up and beribboned like cakes at a church fete. This triple hang is an idea lifted straight from ‘Constable, le choix de Lucian Freud’, a vast exhibition at the Grand Palais, Paris, 2002. There, Mrs James Pulham Sr was hung in place of the Reverend, completing a drawing room drill - glossy flanks, plumed headdress, eyes right. Co-curators Anne Lyles and Martin Gayford claim the credit for organising the first exhibition to explore Constable’s life and art through his portraits – willfully overlooking Freud’s Choice, for which Lyles served on the scientific committee. The Grand Palais used portraiture to flesh out Constable’s vision of an entire world. The small Porter Gallery at the NPG – an end-of-corridor space, without natural light, unaided by beige and aqua walls or the merchandise cabinet glowering over the final room - seems, by contrast, blinkered. It is of course in the NPG’s constitution to favour the historical over the artwork.

What lingers is the pairing on either side of the entrance. Young Constable’s self-portrait, nose tipped for the outdoors, faces across to the last piece in the exhibition, Daniel Maclise’s sketch from 1831, of Constable as Royal Academician, visiting the Life Room. Thinning hair has given way to a distinguished bald patch, but he retains those magnificent sideburns. Beak nose points emphatically to the drawing in hand – all in all, rarely had this ever been a portrait. 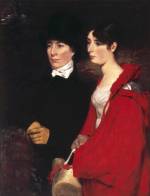 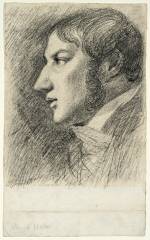 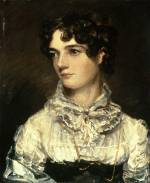 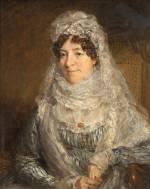