On Photography: A Tribute to Susan Sontag

On Photography: A Tribute to Susan Sontag

Susan Sontag's passionate engagement with photography is the subject of a small but intriguing bit of curatorial ingenuity; a show that offers a handful of Sontag's potent statements on the medium illustrated with images that provide point and counterpoint to her ideas. On view at New York's Metropolitan Museum of Art until 4 September 2006, the exhibit links two of Sontag's published volumes - On Photography (1979) and Regarding the Pain of Others (2004) - with approximately 40 photographs from the museum's collection, including two portraits of Sontag, one by Peter Hujar from 1975 and one in Petra, Jordan, by Annie Leibovitz from 1994. While Sontag's words are powerful and can alter the way visitors look at photographs for the rest of their lives, what emerges most strongly from the show is a clearer picture of Sontag herself.

Born in New York, Sontag was raised in Tucson, Arizona and Los Angeles, California. Her undergraduate years were spent at the College of the University of Chicago; later, she did graduate work in philosophy, literature and theology at Harvard and Saint Anne's College, Oxford. Her first published work was a novel (The Benefactor, 1963), and she has said that she considered herself a novelist. But soon after the book appeared she turned her attention to filmmaking and social activism. These activities and her curious, adventurous spirit took her around the globe. The four films she wrote and directed were made abroad: 'Duet for Cannibals'(1969) and 'Brother Carl' (1971) in Sweden; 'Promised Lands' (1974) in Israel during the October War (1973); and 'Unguided Tour' (1983) in Italy.

The wide range of her interests and intellect led to an interdisciplinary approach that excluded nothing and allowed for a variety of interpretations. Critics would question her boldness in taking on subjects in which she had little background, as well as the contradictions they detected in her views. What might seem contradictory was, perhaps, an expansion of ideas in new dimensions. By nature, Sontag lived with her passions, turning them over in her mind until she could see every side and consider every angle. This is certainly true for her lifelong attraction to photographs; readers will notice a difference in tone and focus in On Photography, which collects essays that first appeared in the New York Review of Books, and Regarding the Pain of Others, which examines the morality and ethics of photography as a chronicle and instrument of war. It was published after Sontag had struggled with cancer (she died of leukaemia in December 2004) and seen a great deal of political and social strife at home and abroad.

War - or more precisely, images of war - haunted Sontag's imagination. As a youth, she claimed, a photo taken at a concentration camp changed her and made her very unsure of the world she had come to know. While the still-strong sense of justice available to children makes many of them highly sensitive to such images, as adults, photos of war tend to desensitise viewers, bringing them, as Sontag has pointed out, both closer to, and further from, reality. Sontag's sensitivity and idealism remained throughout her life. As an adult, she became involved in anti-war activism, traveling to Hanoi in 1968 after the US bombing and writing about her experiences (Trip to Hanoi). More recently, in summer 1993, she staged Samuel Beckett's Waiting for Godot in war-torn Sarajevo.

The mix of photographs in the exhibit mirrors the different dimensions and layers of meaning that photographs have in individual lives. On the surface, they serve as an account of the truth; a reproduction of people and things seen in place and time. The semblance of veracity, Sontag maintained, was at the root of our obsession with photographs. By viewing these images, she said, people believe they can appropriate them, somehow access another person's experience, capture a memory for eternity or own an object. But the medium of photography, in fact, changes how we view what we normally see before our eyes. In 'Plato's Cave', from On Photography, she explained that photographs offer a 'new visual code' and create a new 'grammar and ethics of seeing'.

Some of the quotations come from essays in which Sontag discussed the actual work on view and/or the artist. A work by EJ Bellocq is accompanied by an excerpt from her introduction to Bellocq: Photographs from Storyville, the Red-Light District of New Orleans. Here she suggested the reason for Bellocq's popular appeal: 'the low-life material; the near mythic provenance (Storyville); the informal, anti-art look, which accords with the virtual anonymity of the photographer and the real anonymity of his sitters; their status as objets trouves and a gift from the past'.1

Other images are used to provide viewers with a chance to examine Sontag's words in context. An interesting juxtaposition is to consider the two portraits of Sontag in light of her words. In her introduction to Hujar's Portraits in Life and Death, she wrote that, 'Photographs instigate, confirm, seal legends. Seen through photographs, people become icons of themselves'. Hujar's striking portrait of Sontag exemplifies her words; here, Sontag reclines, her body in repose but her face set in an attitude of thought or contemplation. Perhaps Hujar had tried to grasp the quality of her active mind and her graceful, confident way of being in the world.2

Nearly two decades later, Leibovitz caught Sontag in a different pose, surrounded by age-old rock and an equally massive stone structure in Petra. The often-controversial figure whose physical presence drew attention here seems fragile. The work recalls words Sontag wrote in 1973 suggesting that photographs are 'memento mori' and that the process of photography allows the taker to access the subject's 'mortality, vulnerability, mutability'.3

Whether they reveal the daily stories of individual lives, serve as icons of a way of life or document world events, images, Sontag believed, always require viewers to add to the story. In Stephen Shore's American Surfaces, the artist created a pastiche of Middle America: the facade of a main street JC Penney Co; a household pet; a diner table not yet cleared of a meal. The images beg viewers to fill in the details, to remember times from their own past and participate in an era now gone.4 The intimacy of these photographs comes just before an image by Walker Evans in which Evans affirmed a way of life he considered noble, one with inherent value and stability. Shore's scenes are the ephemeral currency of the daily - idiosyncratic moments attached to specific people and places - and sharply contrast with Evans' work, where the persona of the taker is masked by the subject.

Among the other artists included in the show are Robert Frank, Edward Steichen, Andy Warhol, Robert Mapplethorpe and Berenice Abbott. The variety of selections - portraits, surreal still-lifes, dramas of public and private life - offer visitors many opportunities to test Sontag's statements and explore their own attraction to photographs. A crusader for the issues and things she cared deeply about, Sontag left us words and ideas filled with passion. In the end, On Photography is a celebration of Sontag's vision and the passionate life. 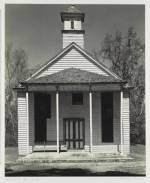