In August, this website featured an assessment of the high quality of the collections at Pallant House, Chichester. As promised in that article, here follows a more detailed appraisal of the new architecture of Pallant House itself.

This building is a remarkable achievement in design terms - a kind of symbolic recognition of the architects' achievement in the case of the British Library, and yet also a building all of its own, in the centre of an extremely high-quality cathedral city with all the environmental safeguards this would entail. Sir Colin St John Wilson and his partner (and wife) MJ Long, have applied the same design integrity that developed from 'The Other Tradition of Modernism' as Wilson calls it; a tradition that rejects the superficial definitions of so-called postmodern architecture, and argues for something more substantial. In this respect it is worth recognising here the high priority that the architects have placed on sustainable energy systems. Pallant House incorporates now a wholly contemporary geo-thermal heating and cooling system, which in order to reduce dependency on fossil fuels, harnesses the inherent natural resources, including the actual thermal capacity of the ground underneath the building. There being no available government subsidy for this kind of advanced technical solution, the full £80,000 funding for this highly original system had to be found from other sources.

Fortunately, calculations show that the new system is efficient enough to permit the installation's cost to be recouped within the foreseeable future. It is all the more surprising then that Pallant House is virtually unique in exploiting such a system, other than an Oxford College alone. Eric Parry, reviewing the building for Architecture Today (July 2006), rightly claimed that Pallant House 'rests firmly in an English tradition of individual philanthropy born of addictive collecting set against the grain of institutional lethargy'. One might also add here that the Sackler Galleries at the Royal Academy of Arts, supported with such dedication by the late Dr Arthur Sackler and his widow (Dame) Jillian Sackler, inserted so skillfully by Lord Foster within two blocks of the existing building, also demonstrate this quality.

The new ground level is organised to offer freedom of movement in space: it is planned around a courtyard, which neatly nonetheless delineates the boundaries of new and old. The courtyard (designed by prize-winning garden architect Christopher Bradley-Hole) undoubtedly benefits from the planting of six semi-mature Plane trees. Above the courtyard, a large window offers an axial view directly across to the arched stair window of the original Pallant House. This conversation between the original Pallant House and the new galleries seems to be entirely benign, each complimenting the other. At ground level again, one is aware of the spatial interaction of the inner courtyard with the entrance hall from the street: but this is an easy progress, without any degree of compulsion. The new galleries provide an extremely rich array of facilities, with a strong provision of prints and drawings gallery, library, workshop and seven varied galleries linking ultimately to Pallant House itself. The importance of such linkage cannot be stressed enough: in no way could the new just be bolted onto the old. The 20th-century collections of Dean Hussey and Wilson merge seamlessly together. Such is the ethos of the place that old and new harmonise readily together. The combination at ground level of ceiling lighting and peripheral indirect lighting from the courtyard mediates inside and outside. The first floor exhibition spaces maximise the potential of the available space. Here, the galleries are top lit by the use of an ingenious system of light wells. The key gallery is 21 m by 6.5 m wide, and straddles a long 45 m east-west 'spine', with six galleries opening off. Some ingenuity is deployed in creating multifunctional space here, to incorporate lecture-cum-seminar/workshop spaces. The Conservatory, with its elegant window looking back over to the Pallant House stair window, creates, when required, a space for reading and study, and even casual browsing. The smell of coffee from below might eventually lure even the most dedicated user down to the restaurant or the garden tables, in what is a veritable suntrap.

The exterior 'match' of the new galleries with old Pallant House is very subtly achieved by means of a recessed stair tower, handsome in terracotta cladding. The passer-by is not intimidated by 'boring old art' as runs the slogan of Pallant House today ('Its not for boring old art'). This might echo the sentiments of the average Chichester inhabitant: instead, a new world awaits, gently persuasive. The transition from the street frontage shared with the facade of Pallant House's grandiose merchant's town house, is somewhat uncompromising, and all the better for this. The Other Tradition of Modernism is vindicated, whatever Betjeman and Pevsner might together find to argue with. For the first time since the Cathedral, in the new Pallant Galleries Chichester has a mainstream example of European state of the art architecture. 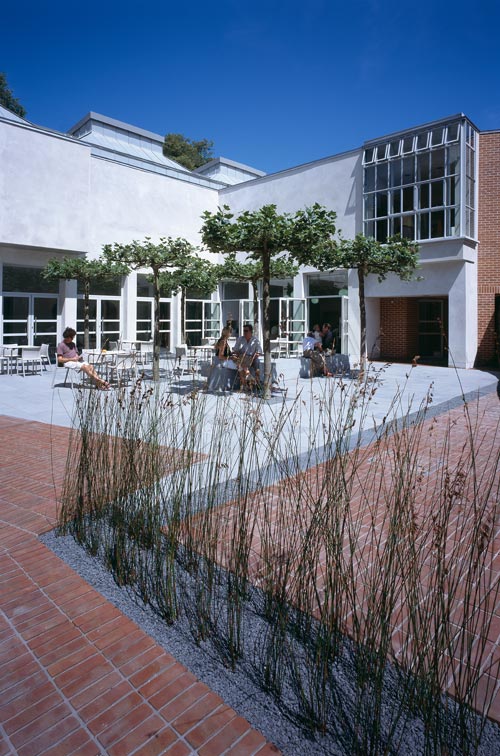 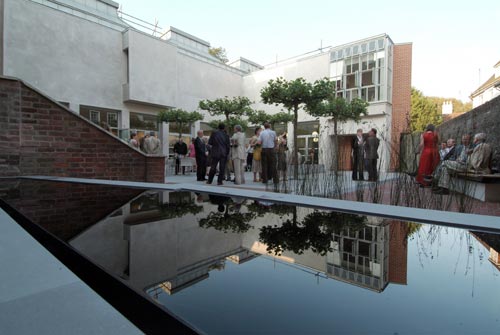 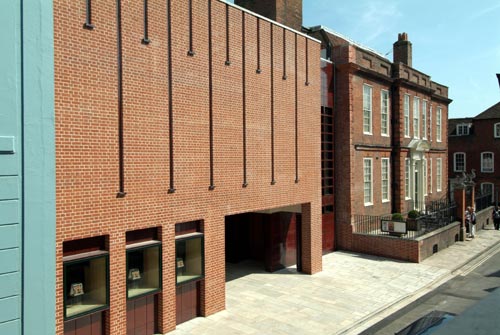