The Architecture Room is a longstanding and traditional part of the Summer Show and is open for exhibits by existing members and by other architects from outside. By force of circumstance, since about one-fifth of all Academicians are architects, this year’s exhibits reveal that it is a tradition well worth upholding, perhaps, dare one say, expanding in terms of the area available.

Traditionally it has always been congested (which cannot be bad). It is to be hoped that with the new building planned (the former Museum of Mankind), adjacent but as yet unlinked, this will be achievable and given more space.

The quality of the work shown is generally of a very high standard, as befits an Institution where the President is himself an architect of major talent, Nicholas Grimshaw. To many of the visitors it may be their first experience of architecture as presented in models, prints and drawings. Not all architect academicians do actually show, which leaves room for a fair number of others.

Both Piers Gough and Chris Wilkinson showed evidence of their proposed new Maggie’s Centres for Cancer Care, the former for Nottingham, the latter for Oxford’s Churchill Hospital, and already under construction. Each made the most of somewhat unprepossessing sites, made available to this expanding charity. That for Oxford is bounded by a polluted stream and with dying willow trees to be recovered or removed.

Peter Cook, as always a magician at graphic and formal presentation, showed his Taiwan Tower scheme, a welcome mega-scheme for Cook to demonstrate his talent now at high build in South East Asia. Architects Tonkin Liu articulated a most ingenious Shi Ling Bridge, a fabulous but buildable model (which attracted a large bevy of school pupils). A fine sectional model was shown by Nicholas Grimshaw of the Cutty Sark Sailing Vessel, following its site replacement and Conservation Project after extensive fire damage. Also shown was a Crossrail model, of its Architectural Components.

Will Alsop, who happens to be a fine painter as well as architect, showed a cool marine model entitled Shipfish, plus a sketch model for Bremen Harbour. Michael Hopkins’ superb 2012 Olympic Velodrome, perhaps now the star of both this show and the Olympic build itself, was prominent. Richard MacCormac’s fine Kendrew Quadrangle for St John’s College, Oxford, (photo by Peter Durant) gave a taste of the high quality that Oxford and Cambridge Colleges still aspire to, but do not always achieve, but MacCormac certainly did. His scheme, built around an ancient college tree reminded one of his fine early Chapel for Fitzwilliam College Cambridge, which benefited from the same kind of tree vision in frame.

While this reviewer squeezed past the throng in the Architecture Room (No VI) it was good to be reminded, in the form of the 164 separate exhibits on show, that architecture still thrives at the Royal Academy, and that some 22 exhibiting architects were RAs, leaving the remainder of wall and floor space for other non-member architects from at home or abroad, “pour encourager les autres”. The RA surely achieves that each year. 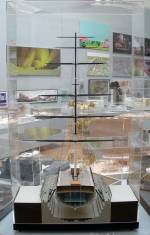 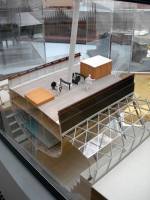