The Disruptive Betterment of Culture

“i am a desperate man who loves the simplicity of
painting
and hates gallarys [sic] and white walls and the dealers in
art” (Billy Childish, i am the strange hero of hunger).
L-13, Clerkenwell, London.

Billy Childish (born Steven John Hamper, 1959, Chatham, Kent) has been variously described as a “cult figure” and an “auto-didactic polymath”,1 yet, despite his prolific output (in a 20 year period he has published over 40 collections of his poetry, recorded over 100 full-length LPs, and produced over 2,000 paintings), he wishes to remain an “amateur Sunday painter”. Indeed he has completed no formal artistic training, having been expelled from St Martin’s in 1981. He resists the mainstream, and has published his own work throughout, always leaving it in its most raw, vulnerable, and authentic format, with uncorrected spelling (he suffers from severe dyslexia), and uncensored for content.

Childish is currently one of the key figures of the L-13 Light Industrial Workshop and Private Ladies and Gentleman’s Club for Art, Leisure and the Disruptive Betterment of Culture, an independent contemporary art space and publishing house in Clerkenwell, London. His recent exhibition there, Works on Paper, December 2010, included a number of charcoal and pastel sketches, many of which were variations on his larger oils from the Fallada Cycle, consisting of over 80 paintings, produced mainly in one or two sittings each, in a period of just three months. Inspired by the German author Hans Fallada (1893–1947, real name Rudolf Ditzen), famous as much for his troubled life as for his novels of social criticism, these expressive canvases, showing a clear influence of Edvard Munch (1863–1944) and Vincent van Gogh (1853–1890), demonstrate the softer style, with less defined outlines, of Childish’s more recent post-alcohol years. Counterpoised against images of Fallada with his children (eg Carwitz im Winter III) are visions of the artist himself with one or both of his own offspring (eg Father and Daughter) at once tender and playful.

An excellent catalogue of these paintings, including appendices of studio images and source material, is available. This shabby but welcoming basement atelier is reached by descending an open wooden staircase from the damp and dripping back streets of London’s clockmakers’ district. The studio-cum-gallery is filled with easels, stacked works, and dilapidated sofas, and manned by its founder Steve Lowe, an artist in his own right. Other recent publications available from their press include The Medway Prison Hulks by historian Keith Gulvin, with the woodcut on the cover designed by Childish, who, it is said, inspired the researcher to write the story of the redundant naval vessels, used for the incarceration of prisoners, with his comment that “the problem with contemporary art is that it doesn’t have enough local history in it”; and The Uncorrected Billy Chyldish [sic]: Selected Poems, a reprint run under the heading of Failure Books, following the banning and enforced incineration of a previous edition, mocked up as the Penguin Classic Art Edition, by Penguin Books.

Another controversial publication from L-13 is AHH2: Love the ART HATE, a collection of text, graphics, propaganda posters, collage, and “objet de hate”, produced by the Art Hate collaboration, including Childish, Lowe, and other art world polemicists, who, drawing on counter-culture traditions from dada to punk, and appropriating emblems from 1930s Socialist Russia and Nazi Germany, began, in 2009, to confront and expose the corruption and commercialisation (as they see it) of British art. They produced a series of fictitious events and real exhibitions booby-trapped with elaborate fictions, culminating in a five-day takeover of a gallery in Cork Street in September 2010. As the flyer for this event proudly proclaimed: “All the artists are creations and/or pseudonyms that may or may not exist in real terms.” Quotes from critics are either post-dated or attributed to the famous and long dead. Biographies of those involved vary wildly from one publication to the next. To what extent all of this is to be taken seriously, and whether or not it can be classified as art, are questions, which even (especially?) those responsible would probably baulk at answering. What is clearly evident, however, is the unrestricted and uncensored creativity inherent to the ideas brought to life. And, as Childish vociferously insists, this (creativity) is man’s birthright, and any so-called “education” which suppresses it is “a lie and corrupt and next to the devil”.2May the child in all of us continue to thrive. 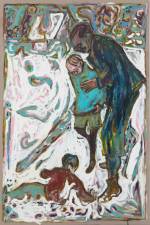 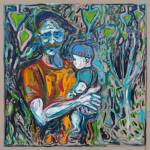 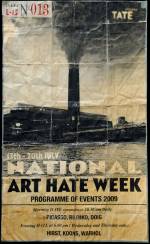