Petra: Rock City of the east

Petra: Rock City of the East

Richard England recently visited Petra. Here he eulogizes on the unique harmonious relationship between its rock carved architecture and its dramatic natural setting.

Some 250 kilometres from Amman and a three hour drive through the arid flat desert between Jordan’s capital and Wadi Musa (the legendary Biblical location of the spring created by Moses), before reaching the wild and alien Wadi Rum, described by T. E. Lawrence as “vast, echoing and god-like”, one encounters a dramatic change in the topography of the landscape. The barren horizontality of parched vastness suddenly mutates into an undulating, pulsating, mountainous explosion.  Landscape transmutes to moonscape and the terrain levitates into dramatic eruptions. Hidden within these motile outcrops lie the remains of Petra, the golden city of the Nabataeans, one of history’s most magical manifestations of the fusion of the hand of man with the formations of nature. Viewing the convulsive agitation of this moonlike landscape, it is not difficult to perceive that the Nabataeans believed that it not only embodied divine power, but that their gods actually dwelled within it. In accordance with other ancient civilizations, the Nabataeans read land-forms, as not only containers of divine power, but also as habitations of the gods themselves. Here, the nature of sacrality arose from a spiritual reading of the natural configuration of the land.

Access to the city was always through the constricted defile of the Siq, a 1200 metre-long narrow gorge, etched 200 metres deep in the stunning, rainbow-coloured, sand-stone.  This channel provided an impenetrable, natural, defensive system for the city, which was originally founded by a nomadic people originating from the Arab peninsula who migrated to Jordan over 2,500 years ago. Carved out of the variegated Nubian rock, the city in its heyday must have presented a majestic coalition of natural scenery and architectural mastery.  The terrain (the original home of the Biblical Edomites) was certainly a major contributing factor to the prosperity of the city. Situated on the main trade route, linking the Orient to the Mediterranean, the city functioned as a thriving cosmopolitan threshold; a market place bustling with the activities of hawkers, merchants and passing caravans. In a hype of human activity, vendors and traders gathered to sell and barter their wares of bales, spices, ivory, amber, frankincense and myrrh. Through the wealth generated by trade and charge tolls, the Nabataeans were able to further embellish an already splendid geographical setting with an impressive architecture carved directly out of the natural rock. Never in history was the twinning of nature and the hand of man been better expressed.

By the time of the birth of Christ, Petra already hosted a highly advanced civilization. Strabo, a Greek geographer of the time, refers to the city as being “well governed with a sensible people”.  Its unique architecture developed as a particular combination of indigenous, negative, troglodyte built-forms layered over by imported influences from adjacent cultures. At such an active multicultural crossroad location, hybrid influences were to be expected.  As such, the city hosted an architecture based on Graeco-Roman classical forms combined with imported Egyptian, Mesopotamian and Semitic overlays. At the peak of its development it also boasted a sophisticated system of paved roadways, agricultural terraces, temples, tombs and theatres together with a complex water channelling system; the provision of water being essential for the passing traders. Through a number of dams and channels cut in the Siq, rainwater was carried to the city and stored in cisterns for the arid summer months, thus creating a veritable man-made oasis.

Even after the Roman occupation of 106 AD, Petra with a then thriving population of some 20,000 people, continued to flourish and prosper. By the 4th century AD however, the importance of the city had diminished and earthquakes in the 6th and 8th century contributed to its further decline.  From then on, apart from sparse information, little is known, until it was re-discovered in 1812 by the Swiss traveller Johann Ludwig Burckhardt.

Today, only temples and tombs remain as evidence of the Nabataeans’ attempts to come to terms with the intangible realms of the divine and the dead.  Although the abodes of the living have long since vanished, those of the gods and the dead remain, as if in defiance to the passage of time.  Consequently, the city today is more of a necropolis.  Throughout history, domestic buildings have always reflected man’s temporality.  On the other hand, when building for the gods or for his own after-life, man has always attempted to build for eternity.  As such, the pages of the history books of architecture are scripted in the stones of tombs and temples.

Today, a visit to this splendid amalgam of man and nature provides a spine-tinkling spectacle. Even if the cradle that once gave birth to a powerful empire is now but a grave, the hand of time has not completely tamed the majesty of this ancient place; and although centuries have passed, the city still manifests a rich and unique potency of myth. Hidden in the bosom of its impenetrable mountain range, merging the geomorphic with the toil of human hands, the rose city still emanates a mystical and magical energy. As we stand in awe to gaze on its remains, we measure ourselves against the genius and grandeur of the wisdom of these people of antiquity, questioning in T.S. Eliot’s words “where has all the wisdom gone lost in knowledge?”

Approaching the city, one still has to meander through the undulating processional Siq; that trajectory of promise, setting the tone, so well fulfilled at its climatic experience of the revelation of the superb architectural splendour that is the Khazneh. Threading through the canyon gorge with its encompassing walls acting as sound-boards to further amplify one’s expectations, one emerges from this tortuous route to behold the magic and majesty of this spectacle; that ecstatic sand-stone poem, written by man and etched in the time scrolls of nature. Although carved out of the rock, the edifice is more a simulation of three-dimensional architecture than a bas-relief composition. Leaving this desert jewel, with its eclectic juxtaposition of Egyptian and Semitic influences, overlaid with foliage, griffins, lions and Amazonian figures, one proceeds to visit the other treasures of this mesmerizing ancient metropolis. After 500 years of silence and oblivion, the city re-emerged in the 19th century to reveal once more the majesty of its ruins, even more resplendent, than in their original intact state.

Through the contacts of my Jordanian architect friend, the opportunity arises to experience the citadel by night. Deprived of the refulgent Arabian sunlight, the place is now a true memento mori metamorphosed into an eerie catatonic trance. Under ­the tenebrous light of the moon, shadows haunt and the city seems now to be inhabited by ghosts. In the absence of daylight, spectacle turns to spectre; anxiety prevails and the citadel now truly reads as a city of the dead. All is clothed in melancholy penumbra and a disturbing calm overtakes and haunts the place, the only sound, reverberating echoes of my own footsteps reflected back from the surrounding somnambulant repositories of the dead. For a moment, time is stopped. It seems that in its hours of sleep, the city is willing to share its dreams.

As dawn again tints all in aureate tones, one stops to reflect that this canyon of the divine really does possesses “a presence in the back of the beyond that stuns everyone who sets eyes on it” (Desmond Morris). As Bedouins perched on camel and steed backs perilously speed to break the silence and stir the dust, the city re-awakens to welcome its daily sight-seers, souvenir-sellers and hawkers. In the emerging morning light, the numinosity of the place seems somehow further emphasized. It is indeed a city of dreams, or perhaps even one of Italo Calvino’s ‘Invisible Cities’ made visible. According to David Roberts “the Arabs themselves” also attributed “the city’s very existence to enchantment”.  While producing his superb delineations of 1839 the artist wrote “I am more and more bewildered with the aspect of this extraordinary city”. The equally talented Edward Lear was also in awe of Petra “I felt I have found a new world, but my art is helpless to reach it to others or to represent it to those who have never seen it”.  Despite Lear’s penchant for “pomskizillious and grophibberous” adjectives to describe locations he visited, it was his travelling companion chef’s culinary description that perhaps remains the most apposite “everything is made of chocolate, ham, curry powder and salmon”.

Proceeding on my itinerary I reach the silent votive-funery Columbarium, its geometric patterns strangely pre-empting the 20th-century Op Art compositions of Victor Vasarely and later the theatre, first carved by the Nabataeans and enlarged by the Romans. Cut into the hollow of the earth, it must have provided a strange combination of spectacles for the living overlooked by its surrounding sepulchres of the dead. One imagines this place as a strange precursor of Giulio Camillo’s 16th century ‘Teatro della Memoria’, with each of its stepped layers storing all the then available knowledge information.  Maybe, Petra’s theatre is not that different; its cascading rungs housing the stratified collective memory of the place.

After a heart racing arduous ascent, one arrives at the High Place, a series of platforms in the sky reaching out to the heavens.  Towering over the rest of the city, this sacred arena was surely where the Nabataeans conducted ritualistic ceremonies and made sacrificial offerings to their gods.  The notion of the elevated platform as a sacred locus is constant throughout history.  Further up, spiraling out of the mountain side into the sky, one finds the monastery of El Deir; which, together with the Khazneh, remains the most stunning of the surviving monuments of Petra.

After visiting what has been described as “one of the most precious properties of man’s cultural heritage” and “one of the ten places you must see before you die”, my own reaction was that the city had totally possessed me.  Calvino’s luscious prose again comes to mind to best express my feelings “I don’t know how long I have been wondering through this city; I no longer know who I was when I entered”. Today, as we continue to drain, dominate and destroy our planet’s natural environment, these carved and etched Nabataean narratives provide a much needed didactic reminder of ancient man’s harmonious and benevolent relationship with nature. The remains of Petra serve above all to remind us that man and earth are of the same essence. 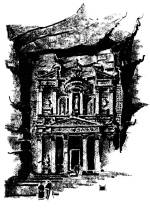