Alberto Giacometti’s name and work have soared in the 21st century, quite apart from the dramatic prices raised in the salerooms recently. The form and content of his sculptures, figurative and otherwise, and paintings and preparatory drawings, with their existential idiom have touched a widening response in their essential confrontation with the contradictions of life today. It is easier now to understand his move out of surrealism in the post-war period. Giacometti has, with his friend Francis Bacon, gained a permanent historical standpoint, close to Braque and Picasso from a pivotal modernist perspective and now holds an equivalent relevance to the literary summits of Joyce and Beckett.

Michael Peppiatt’s new book comes with perfect timing compensating perhaps, for the sad fact, that he missed encountering Giacometti just before his somewhat premature death. A lesser critic/author would have been discouraged by this “near-miss”, but for Peppiatt it was made up for by his close knowledge of the Paris creative milieu in which Giacometti had developed his career. This comes not exactly as a biography since James Lord had already achieved such over a quarter of a century before.1 Peppiatt, with his publisher, has by contrast produced a more visual mise-en scene of his subject, centred on the extraordinary, dilapidated and diminutive studio where the sculptor worked. Peppiatt came to this world so soon after Giacometti’s departure that he found it largely intact. Perhaps he was better able to understand Giacometti’s intimate world in absentia. The studio is now no more, nor is it necessary for any foundation to recreate it since in this book Peppiatt has done so to all good purpose.

Artist’s studios are ripe for misrepresentation. I recall Sidney Nolan’s wife looking at just such a curated effort in a retrospective of his work in Melbourne, at the National Gallery of Victoria. “Sid,” she commented, “would always have made his bed, not leave it rumpled.” All 20 square metres of Giacometti’s space were similarly managed. Peppiatt captures the psychology behind this working assemblage. Giacometti had grown up in a Swiss mountain valley, forever dark and shadowy. He then established a refuge near to his village, cave-like and secure. The studio in Rue Hippolyte-Maindron, behind Montmartre, replicated that need. He never moved, although initially in Paris he had filled a larger space nearby in succession to Alexander Archipenko, around the time when he had exhibited with Gino Severini.

The Giacometti family were firmly established in their village aided by a well-endowed marriage. Alberto, as the book reveals, did not start on the bottom rung in Montparnasse. The studio he established permanently was primitive by choice, and as Peppiatt reveals, life was stringent. His younger brother Diego joined him and soon set up close by his own workshop as a craftsman. This was the start of his circle of support, which as Peppiatt experienced latterly, spread to include such people as Beckett, Sartre and de Beauvoir, Cartier-Bresson, André Breton and Isabel Rawsthorne, whom he met through Francis Bacon, a frequent visitor to Paris. This circle was implemented by his succession of dealers. But he remained accessible to younger sculptors. Eduardo Paolozzi2 was deeply impressed and influenced on meeting him. Raymond Mason, a permanent English exile by choice in Paris, got to know him. Mason corrects a view expressed by James Lord that Giacometti was introspective.3

Giacometti’s late night treks around the Montmartre bars were often in the company of Beckett. Both had this need in common but never much discussed work, although Peppiatt describes the consummation of this friendship by illustrating the threadbare “tree”, which Giacometti designed for the set of Waiting for Godot to Beckett’s evident satisfaction.

Peppiatt records an occasion when Lord had a “haunted look”. This seemingly was an aspect of a life involved with Giacometti and it occurred again when in the extenuated sculpted figures Peppiatt identified, in the absence of contraposto (the balancing of bodyweight and posture) a hauntingly spectral quality. This mood also exists most readily in the plays of Samuel Beckett. Although outwardly quite different, the work of Francis Bacon also achieved Giacometti’s ability to harness, albeit subconsciously, a powerful humanist stance. Peppiatt’s greatest achievement can perhaps be seen to be a resolution in critical terms, of the work of both Alberto Giacometti and Francis Bacon, whom the author has documented in published writing. The visual power of this well-designed publication is strongly embellished by the black and white photographs of Ernst Scheidegger, a masterly photograph of Giacometti by Henri Cartier-Bresson; numerous other archival sources contribute to an understated and excellent publication. 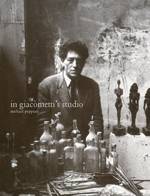