This book is something of a rarity today. It comes as a survey of the design of 14 ‘studios’, all for artists, plus one famous watering hole, the Ivy Restaurant in London, by the architect MJ Long. She is the widow of Sir Colin St John Wilson RA, the architect of the magisterial British Library (in which project she played no small part). However this is more than a bland documentation, it is a testimony by Long to the important part that the Wilsons’ long-term friendship with several of these painters (amongst the most talented in the country) informed and enhanced the development of such very personal buildings over the years.

The majority of the schemes were indeed specifically designed as working spaces for a group of painters who became perhaps the most illustrious in Britain in the late 20th century. So rather than providing the lens insight, as provided by John Russell and Tony Snowdon in the famous publication Private View (1964), when the participants were effectively snapped in motion, MJ Long’s Studios catch the very essence of the settlement, in slow motion of such artists, some of whom were potentially complicated individuals, from Frank Auerbach to RB Kitaj. Yet MJ’s cool and tactful approach enabled the final results to fulfil the trust placed in her as both friend and architect. As Auerbach said, “it was really tact and imagination that turned a very limited space into the biggest possible clear area to work in, and a proper sleeping area, bathroom and kitchen. It’s a sort of miracle”.

The studio for RB Kitaj, a longstanding friend of Sandy Wilson – with its adjoining home – came when Kitaj acquired a somewhat vertical house in Chelsea. MJ had met him before, and realised the common factor, apart from painting, for Sandy with Kitaj, was their all-consuming, mutual appetite for books. This bibliomania raged throughout the many years Kitaj worked in London. The tragic loss of Kitaj’s first wife brought them closer, to a culmination when in due course a major tapestry of Kitaj’s painting, If Not, Not (1975–76) was commissioned by the British Library to occupy pride of place in the entrance lobby designed by Wilson. At Kitaj’s house, the studio – which was integral but separate from other family life – was effectively shoehorned in below, facing the garden without disrupting the home. MJ picked up on all the collaged visual references, which ‘RB’ slipped in, sometimes encrypted. One of the supreme bonuses for the Wilson family was a remarkable portrait of the Wilsons, with children, The Architects, (1979) on location there.

The series of studios for Sandy’s friend and colleague the painter Peter Blake (and fellow Royal Academician) again demonstrated the broad affinity between MJ as architect and the artist. Originally the commission had been intended for Sandy Wilson to carry out, but by then he was fully embroiled with the British Library and Blake took his advice and passed the commission to MJ. A natural priority for Blake was the maximisation of daylight in the working space. Wilson also worked on refining the roof lighting. As Blake said, “what the studio gave me was wonderful light.” And Blake kept coming back to MJ for more. A chapel studio followed in the country and a design (never executed) for a linear ‘Blake Cottage’, and still further work for Peter Blake ensued.

The painter and Royal Academician Paul Huxley also initiated a scheme with MJ in 1993 still ongoing in London. At St Ives, the large-scale Porthmeor Studios scheme, close to the new Tate St Ives Gallery got under way in 2007. A long block of existing studios first developed in the 1880s form a remarkable beachside structure. Long & Kentish – Rolf Kentish being MJ Long’s subsequent practice partner – are essentially being restored by them. The beach reality of the building is enhanced by a continuous involvement with fishermen. This superb and amenable project is getting under way. While the Wilson children grew up, the various studio schemes provided MJ with the opportunity to work from home, free of the interminable and bureaucratic wrangling of the epic British Library project. But the real coup-de–grace of this remarkable book comes at the beginning, with an abstemious introductory curtain call for the house and studio (called Spring House) commissioned by Wilson’s teaching colleague at Cambridge, Christopher Cornford. It was at this juncture that MJ had herself, joined the practice. This superb articulation of spaces on the outskirts of Cambridge engendered, as it happened, some influence formalistically on the ultimate scheme for the British Library. Those who recall Sandy Wilson as his many successful former students do, will remember his beady but gentle presence behind them over the board in the studio. MJ was herself to experience this presence, pencil poised, when Wilson was teaching at Yale. It was sometimes difficult later for critics to ascertain which particular contribution to a scheme was ever Wilson’s. But then he was always a teacher first and foremost, of great perception: a painter first, and then the architect. This beautifully produced book is a formidable testimony to the combined talent of Sandy and MJ, not forgetting these exceptional artists housed thus for their work. It expresses the spirit of true collaboration, rare enough between artists and architects. 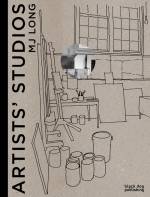