The Metropolitan Museum of Art, New York
3 May-4 September 2006

h2>Attracting those amorous of Englishness, the socialites and libertines who wear Westwood so well, the Metropolitan Museum of Art's 'AngloMania' exhibition this summer has featured internationally in haute couture magazines of the fashionable. Capturing an impression of a nation's notorious vanity, a romance with itself, and the eccentric desire of English designers to re-establish the establishment, the Metropolitan presents quite an odd phenomenon: the Englishness the Western world knows through myth and condescending glances - the notion of a nation.

The myth began once upon a time in the midst of the Enlightenment, when England was perceived as 'a land of reason, freedom, and tolerance' and drove Voltaire to exclaim, 'If ever I come a second time on Earth, I will pray God to make me born in England, the Land of Liberty'. Presumably, he was happy enough that his first life on earth was set in France, though, and one can see why from the little Francomania accessory to the wider exhibition in the 'Croome Court Room, Worcestershire, ca. 1771', which shows tapestries woven at the royal Gobelins Manufactory in Paris. The Earl's wife had a fetish for all things français, and enjoyed wearing couture from the marchands de modes on the rue Saint-Honoré, pieces of which drape the mannequins. The roots of modern French influence in British fashion are traced back to the House of Worth, whose clothes were characterised by Parisian elegance, the romance of France romanticised further by the dreams and ideals of the British designers. These days, British designer, John Galliano, follows the pattern by designing the Dior collection and, in so doing, translates the Paris he perceives with the outsider's subjective romanticism into frills and fun of the highest order. England and France have traditionally played games of vanity with one another, especially in the 18th century: the English wore idealistic couture of the French, and the French wore Anglomanic creations in turn. They waltz together in a ballroom decorated with mirrors, and as they dance, they catch their own reflections in the mirrored décor, slightly more interested in the spectacle they create with each turn, rather than each other. They court one another, that is all.

The court, of course, is the game at play here. It has shifted setting - from the palace to the Metropolitan - but it remains the same. As displayed by such princesses and eccentrics of the modern age, including Kate Moss, Vivienne Westwood, Lindsey Lohan, Sarah Jessica Parker, Sophie Dahl and Sienna Miller at the Costume Institute Ball, the art gallery is New York's answer to the palace - or at least one of its answers - and, appropriately, that is where its 'royalty' court the attention of the press. New York has invited England to the Metropolitan - a lovely exchange from one island to another - and 'AngloMania' is a kiss-kiss as part of their romantic bond.
English wit sparkles in the conversation and commentary, and New York responds with a fluttering giggle. Part of the joke is that although France is mentioned in a little Francomania vignette of the museum, it is dismissed rather than embraced, and there really aren't that many French people around. France and England have always acted as each other's particular companions in the world's masquerade, but it seems from this exhibition that New York has stolen England's affections for a while. In the wider world of fashion and society, New York and England now share a closer bond than England and France. Society girls would rather flick through American Vogue for an education in manners than actually have to learn grammar. Shoes or verbs? That is the question. The pretty shoes hardly touch the ground for all the dancing they do.

'AngloMania' is the obsession with Englishness - although a fever provoked by grounded realities is a mania mostly of the mind, a fever of nerves, a pretty madness, a fictive flourish … Englishness is a myth, a mutual fantasy whose ideals are attune with one another. As 'The Hunt Ball' section suggests, British style and couture also react to political dramas, gelling in seductive antagonism with the mannequins bearing punk-ish attire, shouting that whether in high society or low society, subversion is the fun to be had. The central irony of British fashion, and British society at large, is that the factions possess the same style, the same glare and the same pout, inherent in all the fox fur and chains of generations.

Whether for a punk or a princess, British fashion is much more than frills and frolics; it encompasses every nuance of the masquerade and rebellion ongoing in British society at every level, excluding perhaps the bourgeoisie. Britishness, that self-affirming glance in the mirror at one's undeniable beauty, is a reaction to the horrible rain, the nauseating shade of grey the sky insists on wearing and those mean dregs of humanity who just have a thing against the upper classes. It is make-up and make-believe painted prettily on the face of adversity. It is a gin-in-teacups and mud-on-lace kind of style that attracts Anglophiles as the years roll by, and shows no sign of ever going out of vogue. The myth will not be dismissed. The myth is here to stay, because New York says it is. Kiss kiss. 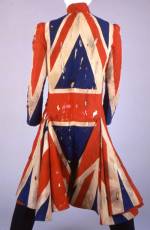 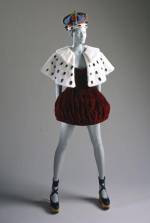