Robert Mallet-Stevens (1886-1945) has, in many ways, been forgotten outside of Paris, and to those who have studied his work, he is often described as a relatively unimportant architect in comparison with Le Corbusier and other modernists. At the Pompidou Centre, in summer 2005, his work was resurrected from the dust and given the platform to be criticised afresh. Sixty years after his death at the end of World War Two, he has finally been given a wider audience.

Very much an Art Deco designer, Mallet-Stevens exhibited in the 1925 International Exhibition of Modern Decorative and Industrial Arts in Paris - he designed film sets and grand interiors as well as buildings. The main attraction of this exhibition are his illustrations, but his colour drawings and simple, black and white diagrams are also featured. His 'Ideal City' is particularly interesting and aesthetically attractive: the collection of individual buildings includes a school and a hospital, among other expected features. Although they are pretty rather than technical, the drawings are worth seeing, if not for their architectural significance, then for their decorative qualities. As Tamara de Lempicka's work was criticised for being too stylish at the expense of substance during a recent retrospective of her work in London, so Mallet-Stevens appears to have made his ideal city impractical. Indeed, the structures are merely hypothetical and wishful in conception - a deeper analysis of their practicality would ruin the fantasy. Against the backdrop of the mass destruction of war, however, it may have been better if Mallet-Stevens had developed the technical insight to parallel his stylish experimentation. There is always a regret, when viewing fantastic designs, that they would be impossible to realise.

However, Mallet-Stevens did not only dream of buildings. Although the 'Ideal City' was not constructed from the debris of war, other buildings materialised from his commissions from wealthy patrons. The exhibition shows the original drawings, models and actual buildings of the Villa Noailles (1923-1928), specified by the aristocratic Charles and Marie-Laure de Noailles to be, 'A little house, interesting to live in, to take advantage of the sun.' After a series of enlargements and alterations, it later became a backdrop for Man Ray's surrealist film, 'Les Mystères du Château de Dé'. The small, modest house eventually became a large villa, 2,000 square metres in size, with a studio, swimming pool, a high, stained glass ceiling, squash court and 60 bedrooms. Other elaborate buildings designed by Mallet-Stevens are Villa Poiret (1921-1923), home of the great couturier Paul Poiret, as well as Villa Cavrois (1929-1932), a synthesis of the modernist conceptions of the European avant-garde. Rue Mallet-Stevens (1926-1934) is also featured, though it would make sense to go and see the actual buildings in Paris, in the 16th arrondissement, and Barillet House and Studio, nearby, in the 15th arrondissement.

The drawings are beautiful, and rather mesmerising; particularly the 'Ideal City', which is quintessential escapism. The rest of the exhibition is interesting in that the architectural processes are well presented and there is proof that fantastic buildings can be materialised after all, even if a uniformly decorative city is unlikely. However, to see a city that is more realistic in its juxtaposition of clashing styles and approaches to architecture, and so fantastic that it is beyond the limits of a single imagination, you need only walk out of the Pompidou and explore Paris itself. 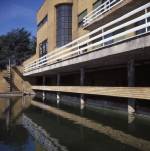 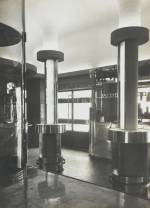