Cream Rising to the Top. 100 Dresses by The Costume Institute/The Metropolitan Museum of Art

Cream Rising to the Top

In his preface to this collaboration between the Met and Yale University Press, Met Costume Institute Curator in Charge Harold Koda says that, for all of their historical, technical and sociological import, the garments selected for 100 Dresses are subjective choices made by Costume Institute staff. In each instance, virtuosity elevates a garment from haute couture to fine art. Readers who frequent Costume Institute exhibits will recognise some ensembles from previous showings, but many of the designs have had few opportunities to appear before the public. With the recent transfer of the Brooklyn Museum's fashion holdings to the Met (see coverage of the transfer: The Often Serendipitous Nature of Museum Collecting, Studio International, 18 September 2010), the Costume Institute now has more than 35,000 costumes and accessories at its disposal. Surely, the task of culling 100 examples from among the collection must have involved intense debate, if not drawn fire. Barring an opportunity to witness the proceedings, readers can be content to savour the results as showcased in a reasonably priced (US$24/UK£16.99), 232-page paperback volume.

100 Dresses will satisfy a broad audience of students and historians, fashion insiders and general consumers. The volume has great visual impact, from the cover image of renegade British designer Vivienne Westwood’s sumptuous fucshia silk satin “Propaganda” dress (fall/winter 2005–2006) and equally startling pink endpapers; to insets of intricate handworked surface decorations; to fine art reproductions and fashion plates; to portrait photos of designers and shots taken from the runway. Brief texts accompanying each example provide scholarly insights and whimsical details that might not make it onto brief exhibit labels.

A ubiquitous feature of fashion history, changing silhouettes can be observed merely by paging through the book, which begins with the Met's earliest complete European costume, a mantua from the end of the 17th century, and closes with John Galliano’s “Creation” ensemble from Dior's fall/winter 2005–2006 collection. Wide hip treatments, cinched waists, billowing sleeves and voluminous bosoms accomplished through artifice (corsets, whalebone and “an inventive array of prostheses and shape makers”) record the confines by which women up to the present day have achieved fashionable status.1 Readers will also note the loosening of physical constraints as certain designers embraced freedom of movement for women who were becoming a force outside the home. Other trends explored include fashion as link between cultures, expression of modernity, and tongue-in-cheek commentary on industry modes and mannerisms.

For instance, the wearing of a court dress, or robe à la française, meant negotiating wide panniers constructed of willow or whalebone and worn under a skirt to fan the material at both sides of the hip to nearly five feet. To illustrate the style as well as point to a particular garment’s beauties, Met curators and book designers have created a dynamic spread, moving left to right: a 1777 etching of a woman wearing a robe à la française requiring the assistance of three attendants to traverse a doorway, the garment itself displayed on a mannequin, and an inset of the three kinds of silver thread employed in the lavish decoration that sets off demure lace and cornflower blue silk. In the pages that follow this garment focus are American recreations of the robe à l'anglaise and robe à la polonaise styles, highlighting a lush floral design on green damask of the former and hand-painted Chinese yellow silk of the latter.

A seemingly simple day dress from ca.1857 America exemplifies the ways in which fashion historians move beyond labels and time periods to articulate artistry and technique; here, a silk tartan fabric reflects a fashion trend linked to Queen Victoria and Prince Albert's association with the Scottish Highlands, their popularity at home and abroad, and new technology that allowed dyers to achieve bolder colours with chemical dyes.

While primarily known for her knit sportswear and little black dresses, Chanel is represented here by dramatic evening wear: In one example from ca.1926–1927, readers will see correspondences between Chanel's well-known fondness for lacquered screens and the Asian-inflected embroidery and beading worked onto a basic sheath style; and in another from fall/winter 1938–1939, a floor-length sleeveless silk gown worn by Countess Madeleine “Minou” de Montgomery to the 75th-birthday party of Lady Mendle (American interior designer Elsie de Wolfe), Chanel literally set off fireworks with sequins against black silk, mirroring the effect of colourful explosions against an inky black sky.

Waist treatments have been among designer’s primary concerns, and here Dior’s brilliance with them is captured by photo angles and book design. Selections for 100 Dresses include Dior’s navy blue “Pisanelle” cocktail ensemble (fall/winter 1949–1950) with its dramatic trompe l’oeil bow serving as waist sash; black wool columnar dinner dress from the same period with its black silk faille typically used for men’s lapels and cummerbunds cascading in a broad panel from waist to floor; and deep purple floral silk strapless “Eventail” cocktail dress (fall/winter 1956–1957) with its “butterfly” fan at waist secured by a bow similar to those used to anchor girls’ braids. Dior named his “Pisanelle” dress for Italian Renaissance artist Antonio Pisannello, whose interest in fabrics and scrupulous attention to detail inspired Dior’s aesthetic.

With so many gorgeous designs to choose from, readers will have difficulty selecting their own favourites. Koda amplified his assertion of subjectivity in his introduction by identifying a few of his:

“So many of the dresses are my favorites given one reason or another – who made it, who wore it, who photographed it, etc – but if there was some calamity and I had to run out with one ensemble, what would it be? I suppose I would grab the grey wool mantua, the first piece in the book. It is exceedingly rare and in an absolutely pristine state. Though it is more handsome than pretty, when dressed, the gown conjures the chilly rooms of an English manor where candlelight or a fire would pick up the glint of the gold embroidery. As an object it projects an hauteur and authority with a palpable sense of another time.”2

An extensive glossary will aid readers unfamiliar with such terms as chlamys (a short cloak worn by men in ancient Greece) and Watteau-back (centre box pleats on the back of a dress frequently depicted in French rococo painter Jean Antoine Watteau’s works). Since 100 Dresses begs for repeated perusing, no doubt readers will, in time, be able to discern the differences between a rouleau and a plastron, and recognise trapunto amid broad expanses of appliqué. For the money, this volume provides great value as primer, précis and platform for the cream of the Costume Institute’s collection. 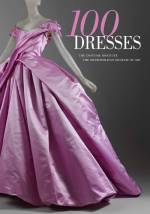 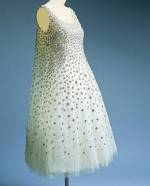