There is a beautiful film called 'England: Home and Beauty' that is a testament to the glamour of the 1920s and 1930s. In it, young elegant women wearing long, sleek evening dresses arrive home late at night, alighting from their Bentleys and Lagondas and entering their flat-roofed homes built in white concrete, steel and glass - many of which are not unlike the transatlantic liners which completed the crossing from Southampton to New York in under ten days. Like the Queen Mary or the Normandie (which was a floating exhibition of French Art Deco), the houses in the film express a new attitude to design which followed the end of the First World War. It began in Russia during the Revolution (lasting there only until Stalin snuffed it out in the second half of the 1920s) before spreading to Holland, Germany and the Scandinavian countries. Eventually, the movement reached Britain at the beginning of the 1930s.

Also in the film is the first block of flats to be built in Britain in reinforced concrete - Lawn Road Flats in Belsize Park, London. Commissioned by Jack Pritchard and designed by the Canadian architect, Wells Coates, the flats were opened by the film star, Thelma Cazalet, in 1934. Agatha Christie, one of the first tenants, said that the building looked like 'a giant liner'. Pritchard still lived in the penthouse when I first visited him in the 1960s but, a decade later (and probably loath to raise the money needed to restore the flats) he sold Lawn Road Flats to the New Statesman. In 1972, the magazine sold the building to Camden Council, which failed to look after it, so that by the 1980s, the block of flats had become a graffiti-scarred eyesore.

Today, a £2.3 million project undertaken by the Notting Hill Housing Trust has been completed which has restored Lawn Road Flats to their original splendour. Under the government's 'key workers' scheme for public service workers, 25 of the 36 flats will be made available to teachers in Camden schools under shared ownership while the remaining ten flats and the penthouse are being sold on the open market. Prices range from £185,000 to £500,000. This is an arrangement that would have pleased Pritchard since the flats were originally designed for young professionals. As Pritchard wrote in his appreciation of Coates in The Architectural Review, the flats were designed for 'a new type of man who likes not only to travel light but to live light (a bit like Coates himself), unencumbered by possessions and with no roots to pull up. For such a person the multiplication of spaces, such as the more expensive architecture usually provides, is not the ultimate luxury but the perfection of service arrangements so as to reduce domestic obligations to the minimum.'

Thus, in 1934, the rents (from £96-£170 a year) were aimed at the young professional earning around £500 a year and included rates, service, central heating and essential Isokon equipment (of which more later). Also, though the flats had their own kitchens, a restaurant on the ground floor meant that the tenants did not even have to cook their own meals. This was a way of living that predated Le Corbusier's village in the sky - his unites d'habitation - by more than a decade!

The opportunity for Pritchard and his wife Molly to consider building a block of flats arose when he inherited £5,000 from his barrister father. He owned a site behind the London underground station at Belsize Park, which, in fact, had the underground railway running below on either side.

Initially, the Pritchards had considered building a single house but, because of Jack's interest in contemporary design, the idea of a grander scheme emerged. As the advertising manager at Venesta, a company specialising in plywood with close ties to Finland, the Baltic nations and even Moscow, Pritchard commissioned Le Corbusier, Coates and Lubetkin to design stands for the company in 1930, 1931 and 1934 respectively. He had also visited Finland to see buildings by Alvar Aalto and had heard about the Bauhaus. Indeed, in 1931, accompanied by Coates and Serge Chermayeff, he visited Eric Mendelsohn in Berlin before going on to the Bauhaus in Dessau - although it was deserted at the time following the dismissal of Hannes Meyer in July 1930. Meyer had become director when Walter Gropius resigned in 1928 The Bauhaus itself was briefly re-established in a former telephone exchange in Berlin under the direction of Mies van der Rohe until Hitler closed it in July 1933. Seeing the Bauhaus only confirmed Pritchard's belief in the need for good design - and, in fact, in the belief that good design had to work socially as well as functionally.

However, the decision to commission a block of flats was also influenced by an exhibition of British industrial art held at Dorland Hall, Regent Street, London in 1933. Here, Pritchard's own recently established company, Isokon (Isometric Unit Construction) showed a 'minimum flat' designed by Coates to demonstrate the kind of accommodation that could be designed for the young professional and stir up interest. Among its features was a small, built-in kitchen. Indeed, such was the interest that Pritchard acquired a list of prospective tenants and, on the strength of that alone, obtained a bank loan of approximately £14,000 to provide the rest of the money needed to build the flats.

Coates was given a very flexible brief, requiring him to design 20-30 flats which provided 'space for living, eating, cooking, dressing and bathing' - and the services already mentioned - as well as garaging for eight to ten cars, a flat for a porter and his wife, a staff sitting room and lavatories. The result was a four-storey reinforced concrete block whose 4.5 inch thick walls were insulated internally using one inch compressed cork slabs cast into the shuttering and then plastered which to give a high degree of heat insulation. Externally, the walls were given two coats of waterproofing and a pink-tinted cement wash that made no attempt to conceal the shuttering.

Internally, the block contained four double flats, with rooms divided by birch plywood sliding screens, three studio flats, smaller flats, offices and storerooms and, on the fourth floor, the Pritchards' penthouse flat with (amazingly) an adjoining but self-contained apartment for their two young sons. Both flats were additions to the original design. On the ground floor were staff quarters, a kitchen and a small restaurant. The kitchen was later remodelled by Marcel Breuer to become the Isobar. Lawn Road Flats' first chef was Philip Harben who, after the Second World War, became the first chef to appear on British television.

In many ways, the design of the small flats in Lawn Road predated Coates' studio flat in 18 Yeoman's Row, London of 1935. Here, most of the limited space was used for the living area with a kitchen and bathroom underneath a small mezzanine gallery reserved for sleeping. It was an arrangement that also reflected Le Corbusier's views on internal planning which were influenced by the disposition of space on transatlantic liners, where public areas were maximised and private spaces kept to the minimum.

Nevertheless, although the basic concept of Lawn Road Flats was clear from the beginning, construction did not proceed smoothly. Indeed, such were the arguments between Pritchard and Coates that Pritchard’s wife, Molly (who was having an affair with Coates), often had to act as go-between. The delays meant that most of the tenants who had signed up at the Dorland Hall exhibition withdrew their options.

Initially, Lawn Road Flats struggled to find tenants, but only until the outbreak of the Second World War, when it was realised that reinforced concrete buildings were good at withstanding bomb blast. Esteemed occupants included Nicholas Montserrat (later to be author of The Cruel Sea), the architectural critic Diana Rowntree and her husband, and Paul Reilly, director of the Council of Industrial Design in the 1960s and 1970s. They were joined in October 1934 by Gropius, who was invited by Pritchard to live in Lawn Road Flats and who managed to leave Germany by attending an architectural conference in Italy before travelling to London where the Pritchards were amazed to meet his new wife, Ise. As they know nothing of his remarriage, having known only that he was divorced from Alma Mahler, a single flat had been provided, so Molly had to rush back to rearrange the accommodation while Jack took the Gropius' on a slow tour of London's sights!

After Gropius came other refugees from Germany including Breuer, Laszlo Moholy-Nagy and Arthur Korn, with the result that Gropius became design director of Isokon (and designed a desk, stool and metal wastepaper basket) while Breuer became its principal designer, producing the famous Isokon Long Chair and nesting tables. Pritchard was also responsible for introducing Gropius to Maxwell Fry so that for three years they jointly ran an architectural partnership that designed Impington Village College in Cambridgeshire, the Shepperton film studios and a house in Old Church Street, Chelsea, London, before Gropius (who would have liked the vacant chair in architecture in Liverpool) accepted an invitation to teach at Harvard - Britain's architectural establishment was delighted that a German did not succeed Professor Charles Reilly. By then, Pritchard had commissioned Gropius and Fry to design a block of flats in Windsor Great Park outside London. Had the flats been built, they would also have predated Le Corbusier's unites d'habitation by more than a decade.

Sitting (in a Long Chair, of course) in Pritchard's living room in Lawn Road Flats in the 1960s, I witnessed his continued interest in design as the post-war director of the Furniture Development Council. He also retained his interest in modern architecture by commissioning his daughter (the result of a wartime liaison when Molly and the boys were in the US) and her husband, Jennifer and Colin Jones, to build a truly modern house in Blythburgh, Suffolk. Pritchard also retained his interest in modern furniture. Hence, Isokon furniture, which included a Penguin Donkey designed by Egon Riss (and redesigned after the war by Ernest Race), was put back into production by John Alan Designs. Today, the furniture is made by Isokon Plus.

So, when Avanti Architects (who have recently restored the Lubetkin-designed penguin pool in London Zoo) began working on Lawn Road Flats, they salvaged and restored as many of the original fittings as possible. This included putting back sliding doors, door handles and letter boxes, and installing light fittings from Heals and Best & Lloyd, and rugs from Woodnotes in Finland, that were as close to the original fittings as possible. Furniture for the flats has been supplied by Isokon Plus. The result is that, despite a period of slow decline and a decade of serious neglect, both the exterior and the interiors of Lawn Road Flats look once again just as they did in the second half of the 1930s.

Footnote
Richard Carr did research into Lawn Road Flats and Isokon with Jack Pritchard from 1968 until the early 1970s, and talked to Walter Gropius about his period in London from 1934-1937 when Gropius was in London in 1968. 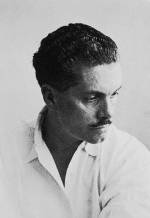 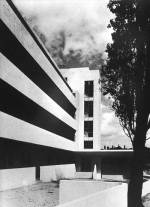