Why, I cannot say, for in her lifetime, Kerkovius was a big success, honoured with various awards and titles, including the Federal Cross of Merit, a professorship and honorary membership of various academies and guilds. Ten exhibitions were dedicated to her in the Kunstkabinett, Frankfurt, between 1948 and 1983 alone, and she was commissioned to produce stained glass for the social services department, the Landesgewerbemuseum and the town hall in her adopted city of Stuttgart, as well as for the university clinic chapel in Tübingen.

Although Kerkovius was one of 12 children, her upbringing was generous and, in her early 20s, she travelled to Venice, Rome, Florence and Vienna. Her return journey took her via Dachau, where she spent five months studying under the abstract painter Adolf Hölzel (1853-1934), from whom Kerkovius learned to see, according to the gallerist Hanna Bekker vom Rath (1893-1983), a student of Kerkovius and a lifelong friend. It was while she was under Hölzel’s  tutelage that Kerkovius moved to Stuttgart, a city with which she fell in love and of which, latterly, she became a legal citizen. During the first world war, Kerkovius, already in Stuttgart, lost the right to her workshop because of her Russian nationality, and, in the second world war, she lost it again, physically this time, through a bomb attack, as well as simultaneously losing her inheritance as part of the Hitler-Stalin-Pact. Kerkovius continued to make work, however, and, reaching the age of 90, she outlived nearly all of her contemporaries.

For Kerkovius, who is probably best known for her intensely rich pastel drawings, the two most important aspects of her work were always colour and form. She spoke frankly about her avoidance of details, saying they might destroy the overall composition, but recognising that some larger shapes nonetheless needed to be included. Learning from, and working alongside, Expressionists and abstract painters, she nevertheless kept figuration alive in her oeuvre, simplifying but not overlooking forms altogether. “Pictures should be like a view from the window,” she once said,1 and she was also clear that every work, including her tapestries, must present a completed picture.

Kerkovius learned to work in the open air and insisted on continuing this practice to the bitter end, often sitting outdoors in the hot sun for hours at a time, pastels in one hand, paper on a board on her knee. Her later works increasingly became landscapes from her continued travels, especially places to which she loved to return, such as Ischia, Norway, Lake Garda and Bad Gastein.

Some works were left more sketch-like than others, such as Schiffe in Norwegen (Ships in Norway) (c1936), through which we can glimpse the paper, becoming part of the colour scheme of the already pink, yellow, blue and white streaked sky. Others, such as Zinnien (Zinnias) (1968), are much thicker in their colour, and one of the few painted examples on display, Häuser im Herbst auf schwarzem Grund (Houses in autumn on a black background) (1967), is heavily impasto, with its broad and deep brushstrokes. There is a loose, uncomplicated, childlike quality about Kerkovius’s work, while it is simultaneously intricate, painted by an experienced hand and viewed through a wise eye.

Two works stand out for me for their ability to capture the flow and movement of rapidly swirling water – Wasserfall Bad Gastein (Waterfall Bad Gastein) (c1955) and Fließendes Wasser über Steine (Running water over stones) (1956) – achieved through the simple use of overlaid lines in different directions. The pictures are a pleasure to stand and contemplate, both for the way they bring their subject matter to life, and in their own right, as sheets of colour and shape.

Having been taught by Hölzel, it is no surprise that Kerkovius also produced some abstract works, exploring – following her master’s teachings (contemporaneous with those of Wassily Kandinsky, 1866-1944) – the rules and principles of painting as an analogue of music. One such example is Farbkomposition (Colour composition) (1966). Kerkovius had also spent some time studying at the Bauhaus in Weimar (1920-24), where she took courses by Kandinsky, Paul Klee (1879-1940), Johannes Itten (1888-1967) and Walter Gropius (1883-1969), among others. It was there that she learned such skills as tapestry (of which there are two splendid examples on display) and stained glass work – methods to which her style lends itself, breaking down larger images into simpler shapes.

While Kerkovius’s works may, in many respects, be likened to those of her contemporaries, drawing on elements of abstraction, Expressionism, Fauvism and colour study, seen en masse, it is clear that her style and method, although influenced, remained unique. That she is less well known than many of her peers is certainly an oversight and something that ought to be set right.

All translations, including those of the titles of works, are those of Anna McNay. 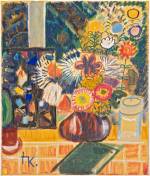 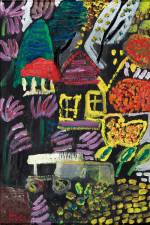