From Kirchner to Kandinsky: German Expressionism in Dutch Museums 1919-1964

From Kirchner to Kandinsky: German Expressionism in Dutch Museums 1919-1964

In summer 2005, the new art gallery in the Groninger Museum (designed by Alessandro Mendini, Coop Himmelb(l)au, Michele De Lucchi, Philippe Starck) is showing an excellent exhibition dealing with a substantial resource of German Expressionist works. These were acquired during and after the most active period of the movement by various galleries, museums and private buyers in the Netherlands.

Predictably, the paintings by Wassily Kandinsky stand out. The superb 1914 study from the Museum Boymans-van Beuningen, in Rotterdam, is accompanied by a fine abstract watercolour, 'No. 6' (1911-1912) from the Stedelijk Museum, Amsterdam. From an art historical point of view, his depiction of Moscow, captured from the Kandinsky family apartment in 1916-1917, is most intriguing. The painting is rather conventional, appearing to be a farewell on leaving the city. There is also 'Weisse Scharfe', a fine work from the Museum Boymans-van Beuningen. From George Grosz comes one particularly important figurative painting, 'The Agitator' (1928). Outstanding among works by Ernst Ludwig Kirchner is his painting of three girls entitled 'Czardastänzerinnen', dated from 1908 to 1920. Another of Kirchner's works, 'Applaus vragende artiste' (1909), has also come from the Stedelijk. There are several works by Paul Klee, notably a topographical semi-abstract work entitled 'Architektur' (1932).

Among a myriad of works by Emil Nolde and Max Pechstein, is a fine assemblage of paintings from 'Der Blaue Reiter' (The Blue Rider) association of artists, including Heinrich Campendonck, Oskar Kokoschka, Otto Dix and Max Beckmann, along with a host of lesser luminaries. The work of Paula Modersohn-Becker (1876-1907), who left Dresden to study in Paris and was familiar with the work of Van Gogh, looks intriguing and she is an artist about whom more might be learnt.

The contribution of German theorist, Wilhelm Worringer, stands behind the confident growth of the German Expressionists, with his influential essay entitled Abstraction and Empathy (1910), of which the painter Franz Marc had written to Kandinsky, 'I am just reading Worringer's Abstraction and Empathy, a good mind whom we need very much. Marvellously disciplined thinking, concise and cool, extremely cool.' Both were to be founders of 'Der Blaue Reiter' in Munich in 1911. A familiarity with this groundbreaking essay by Marc seems to have been instrumental in Dutch circles, turning the direction of collections strongly into the mainstream of German Expressionism.

This excellently curated exhibition brings to mind the way in which museums and galleries of one nation come to reflect the particular interests and nature of its enthusiasts, whether curatorial or in the private realm. As a field, German Expressionism is totally in contrast to the flat world of Dutch cities. The idea of creating such a localised exhibition was original and the museums are to be congratulated. The only small curatorial drawback is that the descriptive plaques for each painting are invariably placed 18 inches from the floor and feature extremely small lettering.

The museum design seems to empathise with this Expressionist exhibition. Into this relatively small university city, comfortably three hours north of Amsterdam by train or by car, the museum is attracting notably original exhibitions. 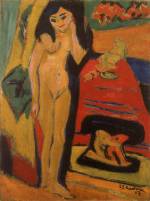