Hilla von Rebay: the Artist Behind the Guggenheim

Hilla von Rebay: the Artist Behind the Guggenheim

Hilla von Rebay is perhaps best known as Solomon R. Guggenheim's art adviser and the person who commissioned Frank Lloyd Wright to design the Guggenheim Museum in New York. But the Adam Gallery is exhibiting work she made as an artist in her own right, principally 'non-objective' paintings and collages influenced by the artists she encouraged Guggenheim to collect.

Born in Alsace to an aristocratic German family in 1890, Rebay studied music and then painting from an early age. In 1915 she was invited to exhibit in Zurich, where she met Jean Arp. He became an early influence, giving her a copy of Wassily Kandinsky's On the Spiritual in Art and introducing her to the techniques of paper collage. He also introduced her to Herwarth Walden, owner of Galerie Der Sturm in Berlin, a centre for German Expressionism. Rebay exhibited at Der Sturm, and later met Rudolf Bauer there, another lasting influence on her life and work.

Rebay moved to the US in 1927, but regularly returned to Europe on buying trips with Guggenheim, visiting among others Klee, Kandinsky, Arp, Chagall and Moholy-Nagy. In 1939 the Museum of Non-Objective Painting (the forerunner of the Guggenheim Museum) was inaugurated, with Rebay as its first director.

Rebay was making art both before and during her work as adviser and director, and indeed first met Guggenheim when painting his portrait. There are works in several media in the exhibition, each attesting to an engagement with different currents in what she termed 'non-objective' art. The watercolours on display date mostly from the late 40s and early 50s, and in their rich colours and mosaic-like tessellation of squares are reminiscent of Klee's most translucent works. Her large oil paintings seem to draw on a variety of sources: while 'Harmony Surrounded' (1950), with its organic, biological lines, evokes Moholy-Nagy's late work, others such as 'Satisfactional Repose' (1962) and 'Attraction' (c.1948) show the continued and strong influence of Bauer.

A more delicate and personal sensibility is to be found in her paper collages. In two untitled non-figurative works in particular, both dated circa 1935, Rebay has opened up the space of the picture plane in an interesting way. In one, the patterned paper she has used suggests a continuous surface, but this unity has been fragmented across large areas of blank paper. The balance of movement and rest suggested by the sharp lines and circles on the one hand, and the areas of empty space on the other, invites a comparison with music or dance. In another collage, the sinuous ribbon-like lines Rebay has created seem to anticipate, in wholly abstract form, the gouaches découpées Matisse would produce in his last years. There is a huge contrast between the lightness of touch in these collages, with the subtle tension in their textures and colours, and the rather heavy and overpowering geometrical shapes that feature in her Bauer-influenced oils.

Two figurative collages of groups of women, 'Untitled' (c.1928) and 'Two Women at the Beach' (1928), show that despite Rebay's commitment to 'non-objective' art, her life studies and portraits could capture mannerisms and social behaviour. In both works Rebay has rendered the faces and gestures in a stylised fashion whilst lavishing attention on the colours and geometric shapes in the women's dresses, in a way that is reminiscent of Art Deco or Japanese woodblock prints.

Outside the studio, Rebay was instrumental in helping Guggenheim to collect contemporary art and ship it to New York. Her recommendations were determined by her personal tastes, however, and caused her friendship with Kandinsky to deteriorate as she championed Bauer's work over his. By 1937, the year in which the Nazis exhibited the confiscated 'degenerate' art of Bauer, Chagall, Klee, Kandinsky and Moholy-Nagy (among many others), Guggenheim's collection contained around 400 works. Notwithstanding Rebay and Kandinsky's exchange of accusatory letters, Guggenheim eventually purchased more than 150 of the Russian artist's works, and he was featured in the museum's 1939 exhibition 'Art of Tomorrow'.

Three years after Guggenheim's death in 1949, Rebay resigned her directorship, having alienated many at the museum, although she continued painting. She died in 1967. Her reputation as an artist has been complicated by the fact that she was an influential woman with a difficult personality, notorious for including her own works in the exhibitions she curated, and for concentrating on the work of Kandinsky and Bauer to the exclusion of others. Her romantic involvements with Arp and Bauer are often mentioned, biographical details which wrongly frame her as an artist's lover rather than an artist.

However, this exhibition suggests a resurgence of interest in her work, following in the footsteps of the Guggenheim's 'Art of Tomorrow: Hilla Rebay and Solomon R. Guggenheim' (New York, 20 May-10 August 2005) - an exhibition that placed her alongside many of her better-known contemporaries from the original 'Art of Tomorrow' show. 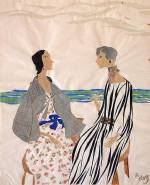 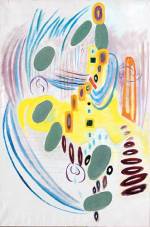