Dennis Sharp has produced this well-prepared monograph to coincide (approximately) with England's 70th birthday. Launched earlier in February 2008 at the Royal Institute of British Architects in London, it comes at a time when the whole creative basis of architectural design is under revision as never before. 'Does one need to draw?' is a current plea made by potential students misled into thinking that computer-aided design can do all the work; and it vindicates Richard England's countervailing standpoint, emphasised by his output repeatedly in his career that an architect is an artist - if not, he is something other.

Richard England, who is wholly Maltese in parentage despite his name and his architect father's own origins, has lived and worked in Malta most of his life. Except for a period as a student in the North Italian office of Gio Ponti. Perhaps his own architecture from the beginning has been a direct reaction to the perfectible formal language of Ponti - a reaction to the buildings, rather than the personality there. Mario Botta contributes a telling appreciation of the salient qualities of England's architecture, including of his 'grande abilita nell'uso delle differenti tecniche grafiche che spaziano dal sottile tratto filiforme a penna per i margini delle architetture alle forti e compatte stesure delle superfici opache per le ombre.' Botta is an architect of England's own mind.

Richard England became well known early in his career when he completed a parish church for the village of Manikata on the West of the island. His brief from the diocese was essentially to recognise the changes to ecclesiastical protocol, priorities to the form of service and hence in church layout established at that time in the early 1960s by the Vatican. The church became celebrated well beyond Malta. England designed a superb womb-like, welcoming enclosure for worship, without the embellishment of a campanile, and with the symbol of the cross sculpted in profile to the side of the upper superstructure, dramatic in sun and shade.

Even then, England was working as much as sculptor as an architect, given the traditional meaning of each role. His instrument was always light and shade, characteristic in the sharpness of the latitude of Malta under the sun. The vernacular and traditional architecture of the Maltese islands basks in the contrast of sunshine and shade. England represents this graphically, with black and white in sharp contrast. There is no mediation - this comes with the manipulation of the built form, to a larger or smaller degree. But England's tendency as sculptor/architect is to articulate form using his special talents as a graphic artist and freehand draughtsman. What Dennis Sharp refers to as England's, 'interest in the harmony of opposites and the dialectical relationship between form and space' is expressed to greatest effect in terms of sculptural form.

England's identity as an architect is expressed by means of an evolving set of graphic techniques advanced experimentally throughout his career. In this book Sharp provides the first comprehensive analysis of these skills, their range and effect both in monochrome and in a growing richness of colour. Hence the book focuses here not on England's built works as such, but on his representations of both his own architecture (to a very limited extent) and on his selection of other buildings in sketches, ideograms, paintings, pastel works and pictures made up. Many of these renderings deal with the buildings and urban landscapes of Italy. Here England admits to having been influenced by that alien force, Ruskin, and indeed reverts to a thinner, more sensitised line. In a section entitled 'Mapping the Matrix', England allows the southern milieu to take over, using colour to emblazon 'the clamour and passion of the places depicted'. Further drawings are clearly readable as conceptual tools of this sculptor/architect par excellence.

The final section of the book, entitled 'Crossovers', reveals England's experimental imperative, as illustrated by his work on stage sets, ceramics, and freestanding sculptures and reliefs. The small, distinctively profiled rock island of Filfla lies a short distance from Malta. Until relatively recently, this beautiful, rugged escarpment rising from the sea was remorselessly used by the Royal Air Force from a base on Malta as a bombing range and target. It survived, although it remains today, for safety reasons (unexploded bomb risk), off-limits and uninhabited. England rightly surmised that Filfla had a prehistoric significance. So he made it his sacred mission to visit the island privately over night, drawn by its mystical and spiritual ambience. Filfla has become England's buried psyche, enriching his soul - a sculpture that he need not amend in its timeless essence. As the distinguished architect, professor and friend of England Nicoletti says perceptively in his further contribution to the book, 'I think through his solitary relationship with the gentle reality of this rock, Richard is able to measure himself against non-human immensity and human tenderness'.

Richard England has worked all his life in Malta. It may be that in such a small community some of his remarkable talent is overlooked, or deliberately cut back. To be a prophet in one's own land is more difficult here than can be imagined. Supported by his remarkable wife and partner Myriam, he has stoically sustained the integrity of his own art, which continues to celebrate these islands. 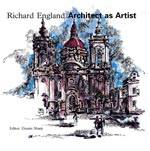