A Maltese Celebration: Architecture into Art

A Maltese Celebration: Architecture into Art

Richard England, now seventy years of age, is a totally indigenous Maltese architect of international renown. He has in fact carried lightly, the task of taking the burden of history on his shoulders. Through July there was shown an exhibition of his work - an exhibition that he shared with photographer Patrick J Fenech - at the Auberge d'Italie in Valletta, Malta, as part of the Malta Arts Festival. A sumptuous volume of memento drawings and texts has been produced (not by England) including a rich selection of personal tributes to him, sent by leading architects such as Norman Foster, Emilio Ambasz, Mario Botta, Edward Cullinan, Massimiliano Fuksas, Hans Hollein, Juhani Pallasmaa, Cesar Pelli, Antoine Predock and artists such as John David Mooney from Chicago, Richard Demarco, and Ian Hamilton Finlay (d. 2006).

Architects are famous for careers that develop late, and continue even later. England, however, was fortunate to have a very early lift-off in his career, and signs are that he will remain productive for many years in the future, and that he will do so to growing acclaim. England has been strongly influenced by the indigenous architecture of his island, which is identifiable from the remarkable, cellular Neolithic temples of Hagar Qim, through to the mediaeval lodges of the Knights of Malta, through to the highly baroque palaces that these European noblemen constructed anew in Valletta. In parallel, the religious architecture of Malta, including St John's Cathedral, created a powerful presence across the island.

England realised early on, the threat posed by tourist development to those memorable skylines, all of an ill-judged character in the first boom of the 1960s. This grew apace, during England's own absence in Milan, where he was training in the office of Gio Ponti. Fortuitously, when England returned to Malta, his father Edwin passed on to him the commission for a parish church on the western side of the island, at Manikata. There it was the enlightened ambition of the parish priest who collaborated with England, to bring to fruition a superb, simple volumetric work, which fulfilled all the purpose of the fundamental changes brought about by the Second Vatican Council joining the celebrant priest and congregation in a revival of the early church plan.

This building stands proudly in open country in all its simple, formal fulfillment, and it would seem to be the work of a much more mature architect. As a result, England's reputation was made within the modernist canon, and with the subsequent tourism schemes, in which he endeavored to provide a contrast to the cruder manifestations of developer building already proliferating across the island, a rising practice has continued, apace with just such a mission.

England's recent exhibition, which he shared with Patrick Fenech, has shown that he is still producing important work. While the Manikata Church remains iconic, after some 40 years there are now opportunities anew. The works shown in the Auberge d'Italie also warn us (and Malta) that the community should still engage with England to enable those key works that have remained projects to be brought to fruition as well as to seek to preserve his existing work, always under threat.

The photographic work of Patrick Fenech shared this exhibition; here is a talent in Malta, whose work is highly complementary to that of England and who is also developing an international reputation. His work, shown for the first time at the Malta Arts Festival this year, was shown last December at the Florence Biennale, and will be shown between July and September this year in Arles, France in the exhibition 'Photographical Entities of Europe.' Next year his work will be exhibited in Boston, USA. One of the most dramatic and poetic works focuses on the question of what happens at the end of the proverbial rainbow. I caught a Rainbow in my Nets dates from this year, and is a multi-coloured photography montage, which follows other fisher-related images from 2007. There is also perceptible a vein of humour which unites Fenech and England. England's remarkable sculpture of voids penetrated by sunlight was completed in Sliema, late in 2002. It expresses, as does Fenech in his work, a human predicament, one of joy in both cases. One is reminded of Richard England's reverent (but discreetly humorous) rendering of the Papal Stand designed and built for the Pope's visit in 2001. This is a masterly evocation of the sublime, so light and white that His Holiness and accompanying Eminences might be carried up aloft, heavenwards, were it not for the strong pair of columns that hold it all together. England managed with this commission to express the sublimity of the moment, but there is also (as those who know him will acknowledge) a slight trace of adolescent humour in the contrivance, something that should be more frequently found in the architectural world. Of this world, England is fully cognisant. 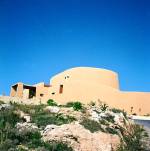 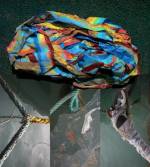