Marc Chagall (1887-1985) was a storyteller with a magical dimension. His popularity was in large part due to the use of Biblical and Hebrew imagery, which imbued his life enhancing works with a universality and broad appeal. His Russian sense of festivity and drama, his love of the circus, of exotic costume and decoration, symbolism and spirituality gave his work, in numerous media, a unique character.

Chagall was a superb draughtsman even though in his technique he did not revolutionise drawing in the way Matisse or Picasso did. Chagall, however, drew all his life. Pivotal to his impressive and lyrical oeuvre was the fact that he made no distinction between different forms of art in terms of their respective importance. There was no hierarchy in the arts for Chagall; he gave a poster the same level of attention as a painting. He was also a natural technician and produced outstanding lithographs, etchings and stained glass, ceramics and sculptures, stage sets and designs. He was described as being in love with his trade.

Chagall produced almost five hundred copperplate prints and woodcuts, around 50 stained glass windows, seven tapestries. However, he was less happy where he was forced to rely on the expertise of assistants (mosaicists, weavers) than when he had the complete solitude that his ceramics allowed.

He devoted a full decade to ceramics in which he produced an impressive 220 works. Until the present publication, edited by Roland Doschka, Marc Chagall: Ceramic Masterpieces, there has been no comprehensive publication of this aspect of his work. Prestel's new book comprises 110 colour illustrations, which are full page, an appropriate tribute to this previously little known work. There are essays by Doschka, Hajo Düchting, Meret Meyer Graber and Charles Sorlier.

Chagall left Europe for America in 1941; in fact he arrived in New York on the day of the German invasion of Russia. There he found expatriate friends: Ferdinand Léger, André Masson, Piet Mondrian, André Breton. He achieved the accolade there of having an exhibition in 1946 at the Museum of Modern Art. In 1944 his wife Bella had died suddenly; Chagall was unable to work for ten months. In 1947 he returned to Paris for a retrospective at the re-opening of the Musée d'Art Moderne. Soon after (1949) he settled in a small Provençal village near Vence where an ancient ceramic tradition existed. The traditional techniques in the 19th century had been revived, and then infused, with an avant-garde love of experiment. Here, in the nearby Vallauris the, ‘revival of artistic ceramics (was) in fact principally due to Picasso whose innovations in the field were continually before Chagall's eyes’.2 Other artists in the early 20th century worked in the ceramic medium including Bonnard, Renoir, Redon, Derain, Rouault and Matisse. For Chagall there was a special primal symbolism in ceramics, using the earth and transforming it through fire. In 1952 in the preface to an exhibition in New York, he described the experience:

In his ceramic work, as in his graphics, Chagall worked in cycles and themes. His ceramic painting was expressive and masterful. He made beautiful images contrasting matt and glossy glazes for example. Using biblical themes he made 41 ceramics between 1950—1952. The biblical story, ‘entered the personal space and brought the message of the Bible directly into the private domain’.4 Many of the subjects for the ceramics had been worked by Chagall in other media, for example, gouaches and etchings. His first ceramics were painted images onto existing Provençal ware. He used the same local ceramics for his daughter's wedding in Madoura in 1951. It comprised ‘some seventy-five individual pieces — cups, plates, bowls, platters and a soup tureen — with fantastic and poetic images. The pieces exude happiness and convey Chagall's blessings in blue or bluish-brown brush drawings. Each piece was decorated differently — with flowers, still lifes, loving couples, nudes, animals, and circus motifs’.5 Soon after, he began to make his own pieces in clay.

In their visual manifestation and thematic content, the Australian artist Arthur Boyd, (1920-1999) sought to emulate Chagall. Boyd's father Merric Boyd is recognised as Australia's first artist-potter, and his six children all learnt to work with clay and fire the kiln. Arthur Boyd and fellow artists began a commercial pottery, albeit on a small scale, towards the end of the war (1944). He produced some very fine ceramic sculptures and paintings on large handmade tiles of Biblical (Adam and Eve) and mythological (Icarus) themes at this time. However, it was not until he moved to London in 1959 that he would have actually seen examples of Chagall's ceramic work.

Boyd had known Chagall's work from reproductions in Australia. Ironically, Australian art historian's have played down the impact of Chagall's imagery and style on Boyd's work. Boyd's borrowing of images from Chagall began with the levitating figures and copulating couples and beasts, which he placed in the Australian bush. Boyd in fact dedicated one of his most important series of paintings and graphic works, in the 1960s (including stage sets for Covent Garden) to the theme of Lovers and Beasts; the title of one of Chagall's vases (1957) in the new publication is The Lovers and the Beast. Visually Boyd's debt to Chagall is compelling; both artists worked with ceramics from quite different positions in the 1950s in France and Australia respectively, and yet produced work that was strikingly similar. This new publication on Chagall's ceramics serves to remind one of the profound influence exerted by Chagall on Australia's leading artist of the 20th century, and many others.6 Within the European tradition in the early 20th century, it was natural for artists to work in a wide variety of media but in Australia it was less so.

Roland Doschka is author of books on Picasso, Chagall and Klee. The essays in the new book are fluid and authoritative, describing Chagall's ceramic technique in relation to the artist's broader achievements. Chagall's ceramics have only been exhibited rarely, given the usual problems of their fragility. The most comprehensive showing was at the Grand Palais in Paris, Homage to Chagall (1969-1970). This was the only significant show where 92 ceramics and 26 sculptures were exhibited.

In Chagall's long and productive career, he focused on ceramics for only 15 years, from 1950 onwards. As Doschka's book demonstrates, it was not merely an adjunct to his wider career but an area he worked at with passion and conviction. The themes that are central to his oeuvre are all to be found in the ceramics: biblical scenes, mythical creatures, the circus, the Paris cycle, embracing couples, flowers and Vence. This new publication is illustrated to perfection, revealing the artist's mastery and passion for a most fascinating medium. Meret Meyer Graber writes: 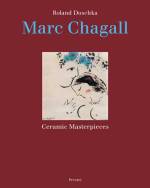