By sidestepping radical abstraction and highlighting the quixotic figurative work of Chagall, this exhibition foregrounds the revolution’s potential to bring joy, sex and playfulness into people’s lives apart from political propaganda, utopianism and promises of a better life 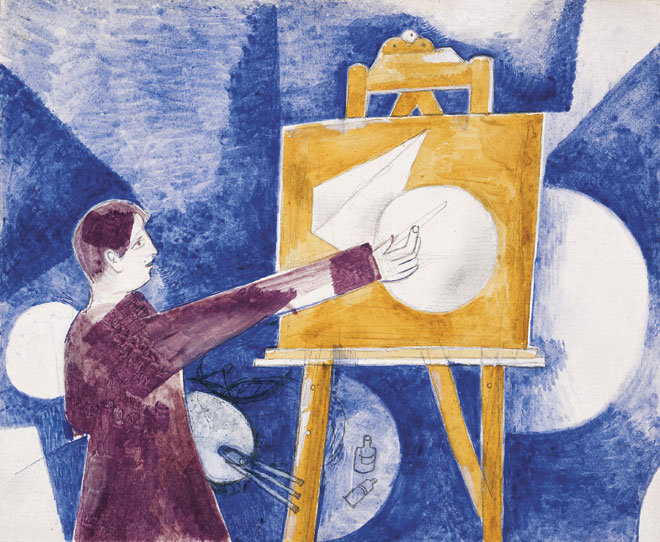 The name of Marc Chagall (1887-1985) is not necessarily the first one that comes to mind when we talk about the art of the October revolution. It is true that the artist was at the height of his life when the revolution “shook the world”, in the words of John Reed, its most famous chronicler in English. It is also true that, by that time, Chagall had already painted the canvases that later made him famous – the playful and whimsical figures of himself and his beloved wife, Bella Rosenfeld (1895-1944); disorienting eccentric perspectives on the landscape of his native city of Vitebsk, then located on the eastern outskirts of the Russian empire; the uprooted silhouettes of “wandering Jews,” hovering over Vitebsk rooftops. 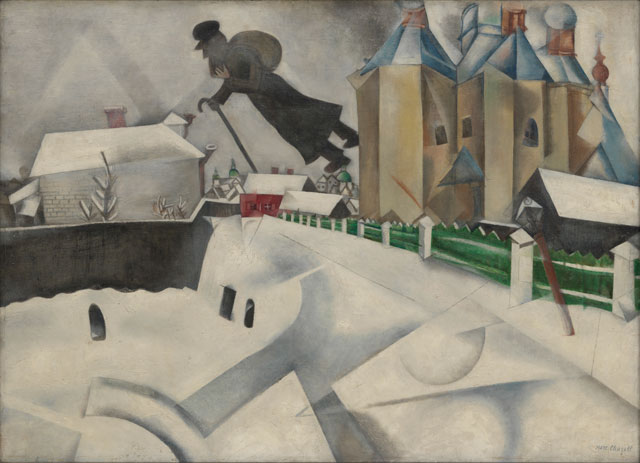 Despite being completed in 1915-18, at the height of the revolutionary upheaval, these famous images by Chagall appear revolutionary in the formal, but not in the directly political sense, because they convey the artist’s personal outlook on life, and do not carry an explicitly political message. Chagall’s paintings, we might say, celebrate the joy of life, the joy of painting and the joy of experimentation at a time when it became possible to celebrate them publicly. The main contribution of Chagall, Malevich, Lissitzky: The Russian Avant-Garde in Vitebsk is that, by sidestepping radical abstraction and highlighting the quixotic figurative work of Chagall, it foregrounds the revolution’s potential to bring joy, sex and off-kilter playfulness into people’s daily lives apart from political propaganda, utopianism and promises of a better life in the future. 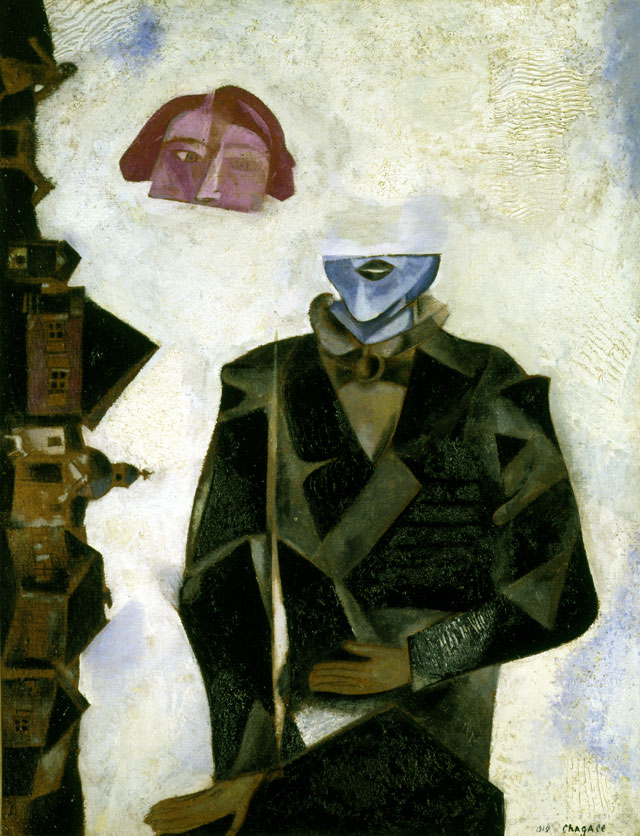 Marc Chagall. Anywhere out of the World, 1915-19. Oil on cardboard mounted on canvas, 61 x 47.5 cm. The Museum of Modern Art, Gunma, Japan, extended Loan from the Bureau of Public Utilities, Gunma Prefectural Government.

Curated by Angela Lampe of Centre Georges Pompidou, the show comprises nearly 160 works from public and private collections in the US, Europe and Belarus, a former Soviet republic. The exhibition is conceived around the Vitebsk People’s Art School, founded by Chagall in 1918, the year following the October revolution. It presents a rare occasion for the museum-going public to learn about the spread of Russian revolutionary art beyond the central cities of Petrograd (now St Petersburg) and Moscow.

It also establishes Chagall as a very particular artist: passionate about his roots and maintaining connection to them in progressive, transformative ways. Having found himself in Petrograd during the Bolshevik uprising, Chagall immediately pledged his allegiance to the new government and was made the commissar of arts of the Vitebsk region by Anatoly Lunacharsky, head of the People’s Commissariat for Enlightenment, whom he met in Paris in the early 1910s. From the very beginning of his involvement in the new government, Chagall’s main preoccupation was to establish an art school in his beloved native city. El (Lazar) Lissitzky (1890-1941) and Kazimir Malevich (1879-1935) taught at that school – first Lissitzky at Chagall’s invitation and later Malevich at Lissitzky’s. 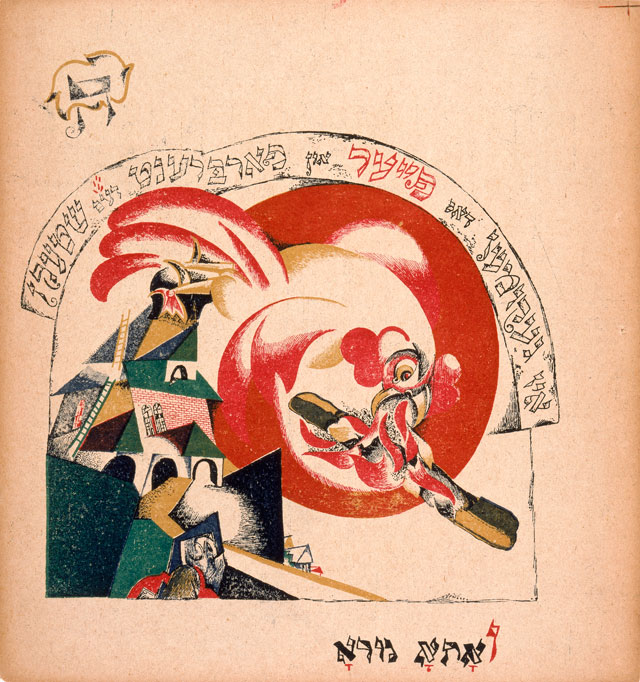 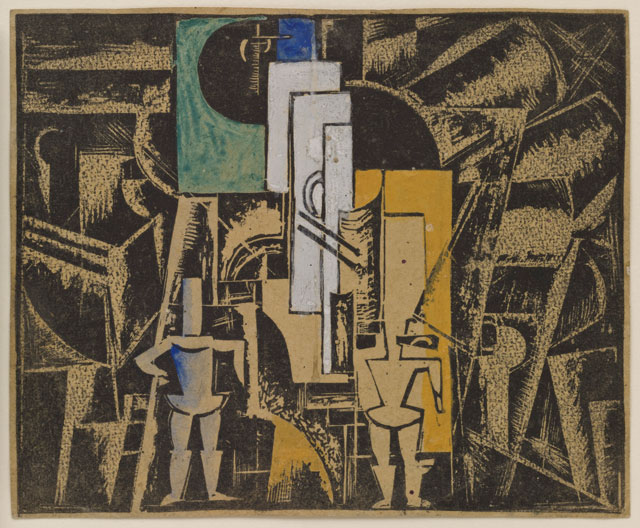 The exhibition is divided into five sections. It opens with a room dedicated to Post-Revolutionary Fervor in Vitebsk, where Chagall holds the viewer’s attention with his most original work, which happens to be his earliest. In the Double Portrait with Wine Glass (1917-18), he portrays himself in a festive bright-red jacket merrily making himself comfortable perched on the neck of his wife, Bella, who does not look particularly happy with this newly found burden, but bears it with dignity and grace, exhibiting enviable endurance and patience. With a wine glass in one hand and using the other hand to cover one of Bella’s eyes, thereby partially blinding her, the artist has his head in the clouds, from which a heavenly apparition blesses the union. 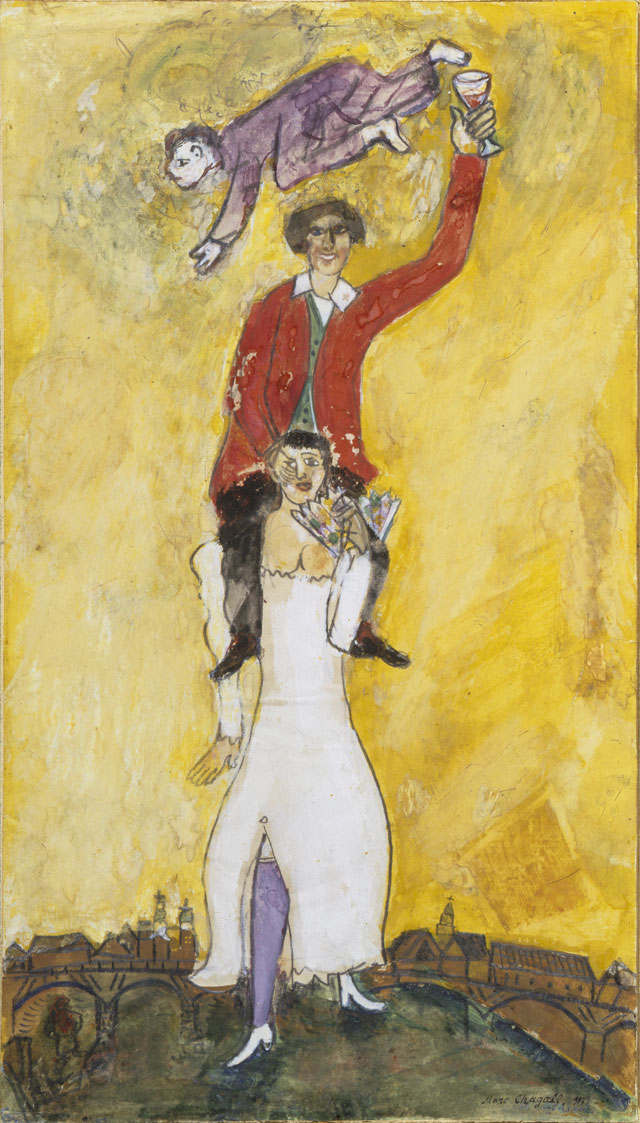 This section also highlights the work of Yakerson, an active participant of the project to decorate Vitebsk on the first anniversary of the October revolution. Chagall oversaw the committee in charge of this project; Yakerson left a most numerous and varied legacy of sketches and designs for it. Done mostly on paper, these works highlight the influence of cubism on the young artist in the geometricity of their composition and the simplified outlines of the figures. Yakerson’s love of geometric simplification found its clearest expression in his suprematist works, exhibited in the second section, devoted to the Vitebsk People’s Art School, where he was the youngest teacher. 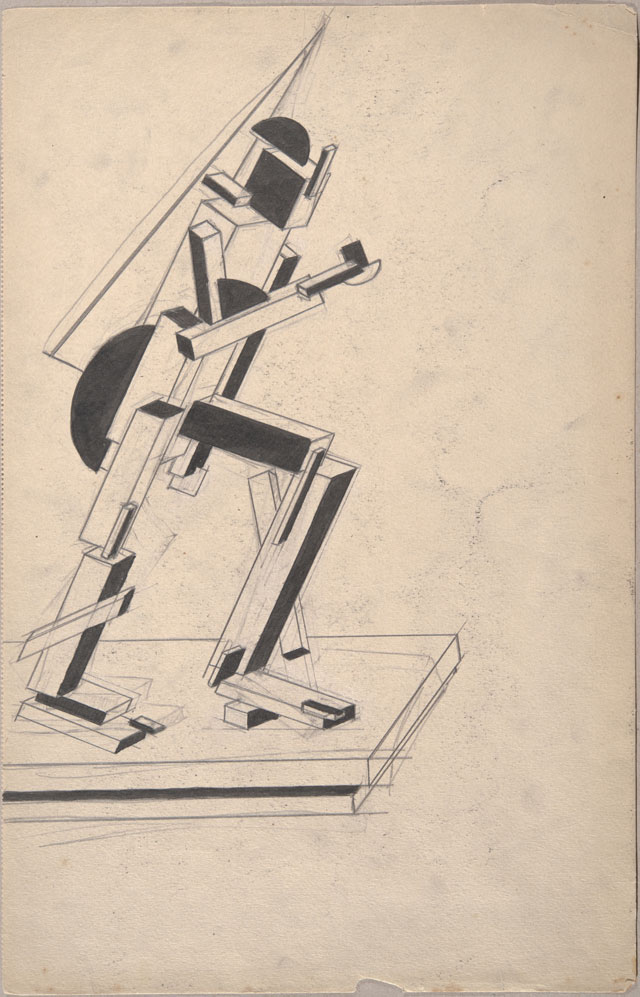 Clearly influenced by Malevich, who began teaching at the school in November 1919, Yakerson’s suprematist studies show a delicate personal interpretation of Malevich’s ideas, tending towards simplicity in their monochromatic and compositional variations. Yakerson’s sculptures also betray the influence of the suprematist leader’s sculptural works, arkhitektons, in their angularity and monolithic block-like design. Apart from that of Yakerson, another new name highlighted in the section dedicated to the Vitebsk People’s Art School is that of Yuri (Yehuda) Pen (1854-1937), a realist painter and a teacher of Chagall and Lissitzky, who was the first and only academically trained painter to give art lessons in Vitebsk at the turn of the 20th century.1 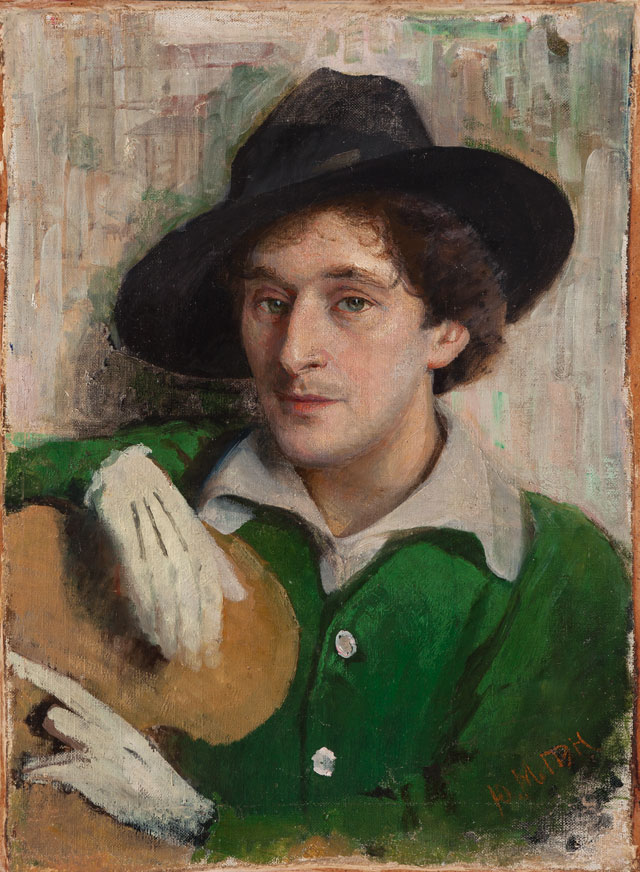 The following two sections of the exhibition cover Malevich’s and Lissitzky’s development of suprematist abstraction, as well as the projects of Unovis (Exponents of the New Art), a group masterminded by Malevich to introduce suprematism into the daily lives of Soviet citizens. All the students and teachers at the Vitebsk Art School took part in it, with the notable exception of Chagall, who in such works as Cubist Landscape and Self-Portrait with Easel (both 1919) was ironically challenging Malevich’s dominance. The exhibition concludes with Chagall’s works for the State Jewish Chamber Theatre in Moscow, where he moved from Vitebsk in the summer of 1920. Some of these stage and costume designs are striking in their abstract quality, displaying the influence of the Vitebsk Art School’s most popular teacher.

Visiting this exhibition allows us to glimpse magnificent holdings of the Russian art at the Centre Georges Pompidou in Paris, as well as to learn about such holdings in private collections and Belorussian museums. Absence of loans from Russia, due to an embargo imposed by the Russian government after an international dispute involving a library of documents of the Chabad-Lubavitch religious movement,2 is most noticeable in the section on Unovis. Another obvious lacuna in the show is the failure of the organisers to visibly acknowledge the painstaking fieldwork of art historian Aleksandra Shatskikh, whose book on the art life in Vitebsk was published in Russian in 2001 and translated into English in 2007. Even though Lampe mentioned the importance of the book in her speech at the press conference, there is no visible signs of its fundamental role for the genesis of the exhibition in the museum space. The exhibition follows closely the research and structure of the book. It is difficult to imagine it taking shape without Shatskikh’s pioneering effort.

References
1. See Vitebsk: The Life of Art by Aleksandra Shatskikh, published by Yale University Press, 2007), page 11.
2. In 2010, the US district court ordered the Russian government to surrender the Schneerson Library to the United States. Russia refused to obey this ruling, and advised its museums to suspend loans of works of art to the US for fear of their confiscation. More on this controversy, see: https://www.nytimes.com/2011/02/03/arts/design/03museum.html. 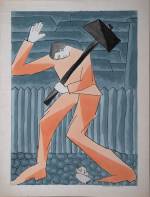 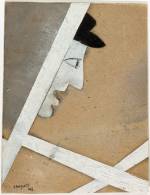 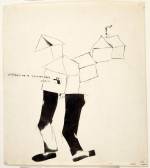 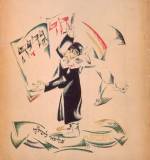 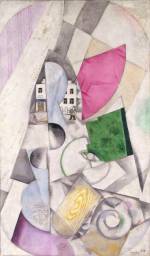 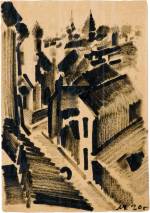 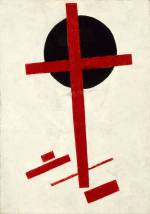 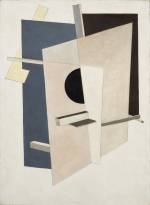 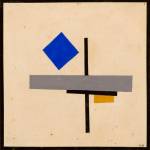 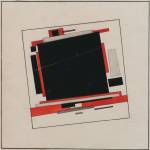