John Piper in the 1930s - Abstraction on the Beach

John Piper in the 1930s – Abstraction on the Beach

Dulwich Picture Gallery marks the centenary of John Piper's birth with a major exhibition devoted to his formative years. The exhibition is curated by David Fraser Jenkins, Senior Curator at the Tate, and Frances Spalding from the University of Newcastle; their biographical portrait of the working lives of John and Myfanwy Piper (née Evans) has been published to coincide with the current exhibition. David Jenkins also authored an earlier work on Piper, John Piper: The Forties (2000). 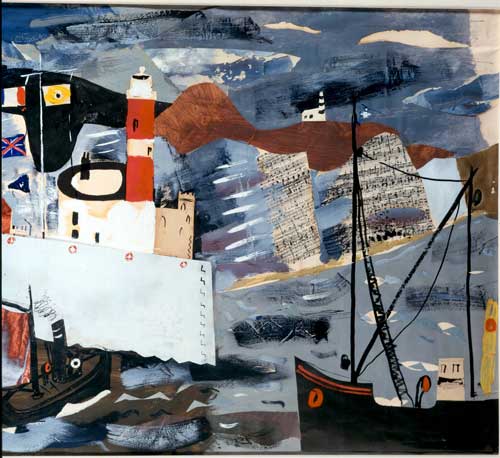 This exhibition is devoted to Piper's work in the 1930s: paintings, watercolours and photographs. Charting his early career, it shows Piper as one of the pioneers of modern art in Britain. Describing the sea as a 'powerful emotive agent', Piper drew on the imagery of the sea, beaches, cliffs and harbours for his painting. In the introductory text to the catalogue, Frances Spalding argues that Piper's distinct abstract language of form, line and colour derived from 'nautical objects, in the shapes and colours of buoys, staysails, masts and hulls of boat'. In fact, Piper was open to many influences in his long career (he lived to the age of 92) and the Dulwich exhibition presents the 1930s as a seminal period for him. He travelled extensively in England to visit churches, and photographed early English sculpture, believing that:

In the final edition of AXIS (the influential abstract art journal edited by Myfanwy Piper), published in the winter of 1937, John Piper wrote about the influence of prehistoric archaeology and air photography on our sense of 'spaces and forms and vistas'. The present exhibition, however, focuses on the influence of the sea and coastal imagery on the development of his work.

Abstraction in England began in the tentative experiments of the Bloomsbury artists, Vanessa Bell and Duncan Grant, in the years before World War 1. The critic Roger Fry, who had organised two seminal exhibitions of Post Impressionist art, the first showing in England of Cézanne, Matisse et al, in 1910 and 1912 respectively, belonged to the same circle of friends and exerted considerable influence on these and other artists at the time. Fry described a purely abstract language as 'a visual music', an immediate expression of reality. In fact, Bell and Grant produced only a small number of abstract works. A more consistent form of abstraction was the harsh, angular, architectonic work of the Vorticists. While interest in abstract art may have waned during the years of the first war, by 1932 Paul Nash wrote in the Listener that abstract art was again very much alive. He wrote:

Herbert Read's The Meaning of Art was published in 1931 and Art Now in 1933. Myfanwy Evans was the driving force behind the magazine AXIS, first published in January 1935. It was devoted to Abstract art and John Piper who wrote regularly on art, supported the project with great enthusiasm.

Between 1929 and 1934 Piper lived in a cottage in Betchworth, Surrey. From there he had easy access to a number of beaches on the South Coast. In the Listener he wrote that in England no place was further than 70 miles from the coast. 'The sea is the mystery that lies beyond the flat fields and the woods and downs, the rough moors and the Black Country recesses: never far away'.3 In the Architectural Review (January 1938), he extolled the nautical style making the connection between maritime style and modern art, design, and architecture. In this, he absorbed the atmosphere of his times in terms of the interplay between various aspects of the visual arts. As the current 'Art Deco' exhibition at the V&A displays 'style' in areas of interior design, the applied arts, industrial design and architecture were influenced by the great developments in technology. Le Corbusier made the connection between maritime imagery and modern art in his seminal writing, Vers une architecture (published in England as Towards a New Architecture 1927), where he described the steamship ('a machine for transport') as a further 'important manifestation of temerity, of discipline, of harmony, of a beauty that is calm, vital and strong'.4 He recommended that a modern house should be conceived as economically as a ship's cabin.

John Piper (born 1903) worked in his father's law firm, under sufferance, until 1927 when his father died. He then felt free to study art, which his mother supported. He attended the Richmond School of Art in Surrey and the Royal College of Art, London, but left without completing his diploma. While establishing himself as an artist, Piper wrote reviews and, in the process, made friends with a number of artists. He began to exhibit regularly in 1931. Receptive to many sources at this stage, he appears to have taken as the starting point for his own maritime paintings, Braque's Dieppe paintings of 1929, in reproduction in Cahier d'art. Piper later admitted the influence of Braque on his experimentation in collage, in which he achieved a surrealistic effect by using newspaper, marbled paper, and detailed engravings of shells and fish cut from aquarium catalogues.

At the invitation of Ben Nicholson, Piper joined the 7 & 5 society and exhibited in its March 1934 exhibition. Its members included Barbara Hepworth, Ivon Hitchens, David Jones, Henry Moore and Winifred Nicholson. As the first room of the Dulwich exhibition reveals, Piper was producing seaside still-lifes at this time with an assortment of objects: bottles, jugs, shells and books. They are carefully placed on window ledges with views beyond to harbour buildings, quays and boats. His debt to various artists including Dufy is evident.

Piper's 1934 trip to Paris was of great importance in the development of his work. There he saw Alexander Calder's wire sculptures. Soon after, he experimented in the same vein. In the same year he met Myfanwy Evans who later became his second wife. Evans played an important part in Piper's art career. In 1934 she travelled independently to Paris where she met Mondrian, Brancusi, Kandinsky, Domela, Giacometti, all of whom became seminal figures in 20th century art. This experience prompted her to start a journal devoted to abstract art.

Behind AXIS was the Paris experience of emigré artists who viewed abstract art as a calm order in response to contemporary conflict and chaos. Ben Nicholson and Barbara Hepworth, who Evans met through Piper, had some involvement with artists there and were already in the process of developing their own abstract language. AXIS, in turn, gave them considerable coverage. Piper was a vital force in the magazine's short life assisting in all aspects of its production. The publication of Axis: A Quarterly Review of Contemporary 'Abstract' Painting and Sculpture, was announced by Paul Nash in The Times (12 June1933) and described as 'the expression of a truly contemporary spirit'. AXIS sought to avoid a strict purism in its agenda, allowing instead a diversity of views. In terms of its editorial, AXIS was less compelling than its appearance. A divisive element in the first issue was an article by Paul Nash in which he stated that if he translated totally beyond the image, he would suffer in spirit. Nicholson and Hepworth were angry that he was undermining their position.

Piper himself, a key figure in the magazine's existence, also found that he required things English, and continued his travels around the country to pursue his love of stained glass and Anglo-Saxon and Romanesque carvings. In these he found 'immense personal conviction'. AXIS promoted Piper's career greatly in terms of published appreciation of his work while providing a platform for his own writings. He met a great many other artists and theorists and organised a number of important exhibitions.

By 1935, the political climate rendered the approach in AXIS, quite untenable. Debates on the role of art in society raged and, in response to the Spanish Civil War (1936), a marked shift took place; articles on Seurat, Poussin and Cézanne were included. AXIS published its eighth and final issue early in 1937. Piper announced, a year later, that abstraction was a luxury. He returned to nature, to the beach on the South coast where, as this exhibition shows, he did some of his best work. In its short life AXIS made a great contribution to art in England. It became possible for British artists to have a dialogue with international modern movements. John and Myfanwy contributed to the courageous campaign, embarked upon by Roger Fry 25 years earlier, to introduce modern art and ideas to England.