The long career of a colourful chameleon, Russian-born artist Marc Chagall, is shown off in more than 200 works on loan from over 20 collections

When Henri Matisse died in 1954, Picasso proclaimed: “Chagall will be the only painter left who understands what colour really is.”1 At this time, Chagall, the modernist painter par excellence had already enjoyed a long career, filled with a thorough exploration of the colour palette and subject matter. Born in a Jewish family near the picturesque and church-filled Russian city of Vitebsk (now in Belarus), Chagall enjoyed a youth encapsulated by a tight-knit Jewish community; an early life packed with visual experiences that would influence him until the end of his career.

This exhibition, at the Museum of Fine Arts in Brussels, the idea of which was first conceived in Paris more than 20 years ago during a meeting between Claudia Zevi, curator, and Ida Chagall, Marc Chagall’s daughter (who died in 1994), works around the question: “Can we create an exhibition that presents a journey through the artist’s life?” And the main themes presented here do just that. Chagall’s connection with Jewish culture, the iconography of the shtetl (small Jewish market towns that existed before the second world war), folk traditions, and his exploration of 17th-century literature, light and use of colour are all represented here, which may explain why the show was a blockbuster at the Royal Palace of Milan, where it started its journey in September 2014. Particular attention is given to Chagall’s Russian period – accentuated by Russian folk music played throughout the exhibition – during a time of both revolutionary political movements and the soaring activity of avant-garde artists such as Kazimir Malevich and Alexander Rodchenko, among others.

Zevi’s exhibition centres around four main parts and, although neither unique nor innovative, it does offer the visitor a good overview of Chagall’s oeuvre, which shows signs of strong influences, such as cubism, symbolism, fauvism and, at a stretch, surrealism.

The first part of the chronological exhibition looks at Chagall as the champion of cultural/identity mixture. After living in Saint Petersburg, where he studied at the workshop of the Russian painter, costume and decor artist León Bakst, the young Chagall left for Paris. Still in his early 20s, he discovered avant-garde painting in the city of lights, and a cubist tradition mixed with a fascination for icons, Russian folklore and Jewish Hebraic elements lace his early work. Specifically in I and the Village, painted in 1911, the year after he came to Paris, and Temptation(1912), these influences are apparent. His poetic language, seen in flying creatures, talking animals, fantasy and a sense of melancholy, seems firmly set, enriched by the theme of the Jewish world, which appears after Chagall returns to Russia in 1914 and is forced to remain there because of the war, thwarting his desire to stay in Paris. During his time back home, the artist paints a number of more personal paintings, celebrating key events in his young life, after having married Bella Rosenfeld in 1915. Beautiful, childlike, colourful examples of this period here on display include, The Birthday (1915), The Poet Reclining (1915) and The Promenade (1917-18). In 1922, Chagall left Russia for ever.

Another major element of this exhibition is Chagall’s depiction of the Jewish community and the tragic fate and persecution of the Jewish population during the first half of the 20th century. Between 1914 and 1922, he painted large versions of Jewish characters roaming the cityscape. Fascinating examples include The Red Jew (1914-15) and the unusual Feast Day (Rabbi with Lemon), 1914. Later on, when the political situation for Jews grew ever more grim and reality got the upper hand, Chagall expressed his views on the continuing threats to the Jewish people. In 1939, due to the uncertainty of his own fate – two years earlier, the Nazi party had declared his work “degenerate” – he was forced to leave France, where he had once again settled, for the US. During this time of personal hardship – his wife Bella, who had been a constant subject in Chagall’s art, apparently died of a viral infection in 1944 – he painted what are perhaps his strongest paintings; a work with a soldier wearing a swastika on his sleeve, the troubled Yellow Crucifixion of 1942 and The Falling Angel, which he started in 1923, came back to in 1933 and finished in 1947. Specifically, this painting is haunting set against the backdrop of 1930s-40s Europe; grey, a Jewish character fleeing holding a scripture, a red angel falling backwards while losing grip of a ticking clock.

During this time of self-imposed exile, however, a third pillar of his work surfaced. Chagall had always counted on his regular contact with the theatre world, probably a relic from his early apprenticeship with Bakst. He had already created a number of theatre sets, in particular for plays by Gogol. In 1920, he also worked for the Moscow State Jewish Theatre, and a number of panels that he created for the company are presented here, along with some of his more important work for the performing arts. These include a preparatory drawing for the costumes of The Firebird by Stravinsky (1945), created during Chagall’s time in the US, The Triumph of Music (1966), a preparatory drawing for his monumental mural at the Metropolitan Opera House, and also a study for the equally impressive ceiling of the Opéra Garnier in Paris, which Chagall prepared in 1963.

Although music and entertainment seems to have become increasingly important in Chagall’s postwar life, due attention should also be given to the work he produced after he settled in the south of France with his second wife Valentina Brodsky in 1948. Here we observe a renewal of his interest in colours, light, flowers, which are filled with allegorical meaning and appear above the bright skies of the utterly captivating Saint-Paul de Vence, where Chagall died in 1985. Couple above Saint-Paul (1968) serves as an excellent example of what seemed for Chagall the start of a new chapter.

The visitor is treated to a lot of Chagall here in Brussels. Rooms filled with colour and music. Although these works have probably featured in many an itinerary before, they offer simply, in the words of the museum director, Michel Draguet, what it is we may now desire most, “optimism”, and for that simple reason, this retrospective deserves a visit.

Reference
1. Chagall: A Biography by Jackie Wullschlager, published by Knopf, 2008. 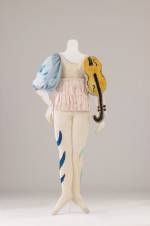 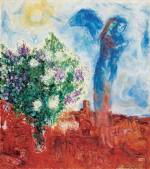 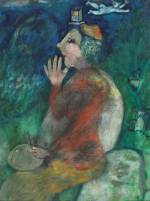 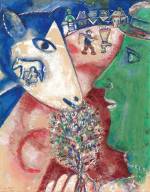 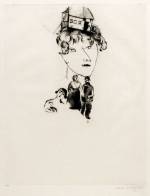 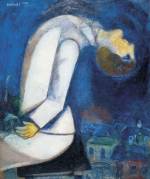 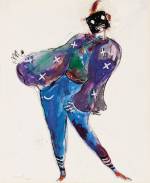 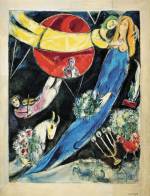 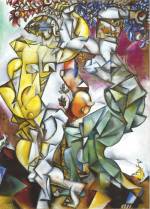 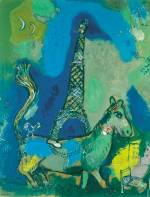 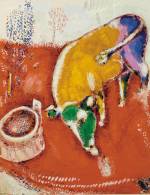 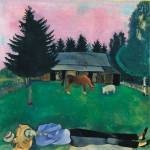 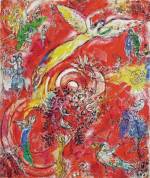 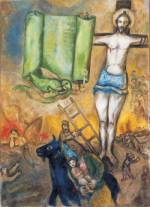