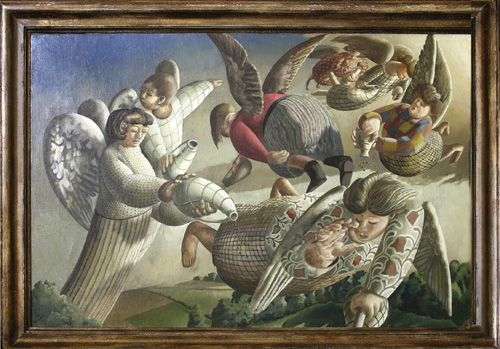 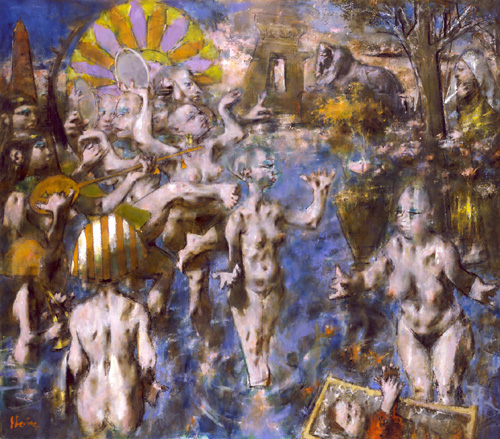 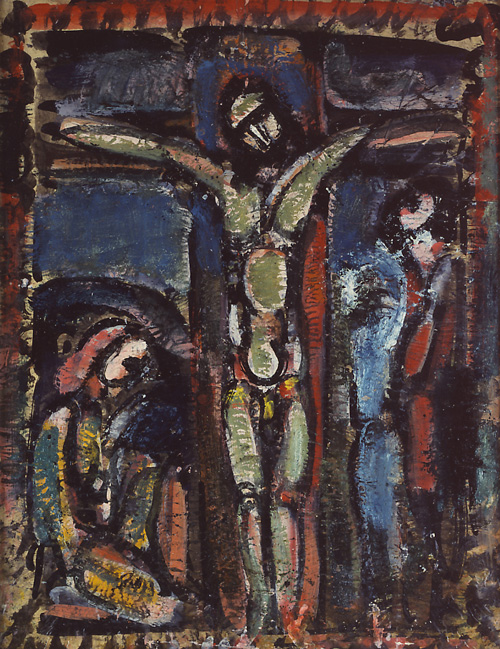 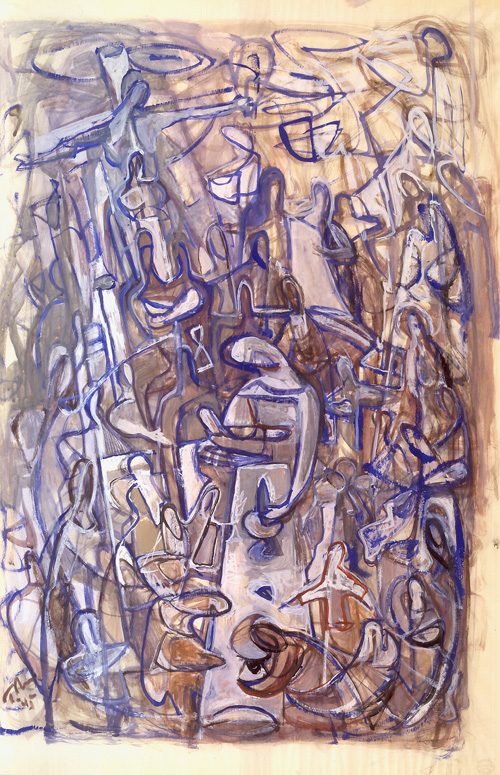 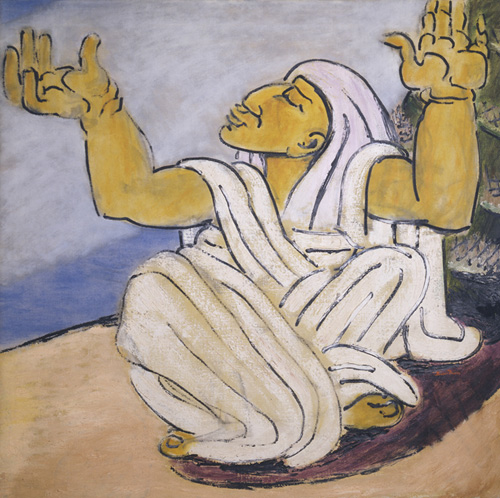 Wrestling with the Angel in the Modern Age

For most of human history, art works were centred on the beliefs of a group and clearly expressed the group's fears, hopes and expectations. In the earliest days, the primary purposes of art were to pay homage to a variety of divine beings and to relate the experiences of men and women with spiritual aspirations. Later, the Jewish and Christian traditions inspired some of the most elaborate and accomplished works in art history. Patronage and financial support from religious institutions defined tastes and styles, kept artists working and funded projects that have endured through the ages to instruct and influence new generations of artists.

During the late Renaissance and through the Age of Enlightenment, secular concerns, scientific discoveries and a philosophical commitment to objective truth began to influence every aspect of life, including the arts. Although artists were freed to explore a much wider range of subjects, biblical stories and characters remained an important source of imagery. Churches still retained artists and craftsmen for paintings, sculptures, tapestries and other decorative elements, as well as for restoration.

While church commissions are no longer the major source of arts funding, and overt religious imagery does not figure in the majority of modern art works, an exhibit at the Museum of Biblical Art (MOBIA) in New York attempts to show how the bible continues to inspire great works. The artists selected for the show have used biblical imagery to express personal belief, to connect to a tradition they do not share to offer a critical commentary on contemporary society and to voice political protest. Some of the 30 pieces were created for church and private commissions, and suggest that this type of patronage can still propel high-quality art.

'Biblical Art in a Secular Century: Selections, 1896-1993'displays a remarkably flexible approach. Artists range from those for whom art and religious heritage were inseparable (including Marc Chagall, Georges Rouault, Ben-Zion Weinman and Stanley Spencer) and those for whom the bible was an occasional source of imagery (for example, Käthe Kollwitz, an active socialist and pacifist; Kiki Smith, who has focused on the multidimensional experience of the physical body; and George Segal, a painter and sculptor associated with the Pop Art movement). The show's elastic concept yields mixed results. By including such diverse artists and raising questions of motivation and interpretation, the curators set an ambitious goal that cannot be realised with a mere 30 pieces of varying quality. And by attaching a label (biblical art) to works that, generally, are considered in the totality of modern art they risk marginalising, rather than expanding, individual interpretation and appeal.

Chagall's (1887-1985) inclusion in the show with 'A Pinch of Snuff' (watercolour and gouache on paper, ca.1912), seems superfluous, since his name is inextricably linked to the bible; in 1973, the French government established the Musée National Message Biblique Marc Chagall in Nice, acknowledging Chagall's identity as a painter of biblical subjects. Including Jack Levine (b.1915), an expressionist painter known for his satires on contemporary life, is more compelling because, as Levine states, he is not a believer. He began to explore the bible after his father died. Based on the Old Testament story of finding the infant Moses among the bulrushes, Levine's 'The Finding of Moses' (oil on canvas, 1993), pays tribute to his father and celebrates the birth of Levine's twin grandchildren. For the artist, the painting functions as a bridge between generations and to a heritage that had been lost to him.

The exhibit further explores the Jewish tradition in works by Chaim Gross (1904-91) and Ben-Zion Weinman (1897-1985). Like Chagall, Gross was raised in a Hasidic family. He made a number of sculptures based on the Old Testament story of Naomi and Ruth; one shown at MOBIA, carved in 1956 from lithium stone, is shown along with Gross's teakwood 'Judith' from 1960. Gross's father worked in wood, and this sculpture connects the artist to his personal history as well as to a spiritual legacy.

In 2004, Chagall and Ben-Zion were featured together in an exhibit of biblically inspired works at Calvin College in Grand Rapids, Michigan, entitled 'Talmud in the Art of Marc Chagall and Ben-Zion: Two Significant Twentieth-Century Portfolios on Biblical Themes'. Ben-Zion was born in Poland and raised for the rabbinate. His father actively discouraged Ben-Zion's interest in the arts. When he arrived in the USA in 1920, Ben-Zion began drawing and visiting galleries. He never received formal training. Steeped in Jewish tradition, he developed a style that placed a spotlight on a subject's essence through simple compositions and subtle color palettes. With these techniques, he evoked the serenity of a spiritually centered world.

During the 1930s, through associations he made with gallery owners and artists, Ben-Zion met Adolph Gottlieb, Mark Rothko and others who, with him, formed The Ten. This group of avant-garde artists aimed to shake the art world with something truly new. While Ben-Zion's work was particularly singular, perhaps due to his lack of training and instinctive method, it also seems timeless. At MOBIA, two paintings attest to the artist's skill in making characters from the Old Testament appear both eternal and profoundly human.

In 'The Prophetess Deborah' (oil on canvas, 1957), for example, the figure of Deborah exudes peace, strength and conviction. Rooted to the earth in a seated posture, she inclines her head towards the heavens, as her upraised arms give praise. Ben-Zion's compositional subtlety animates this compassionate woman and wise counselor who lived in the hills north of Jerusalem; in his hands, she becomes both an earth mother and a divine prophetess. In similar style, he painted 'Abraham Counting the Stars' (oil on canvas, 1948), which emphasises the visionary quality of spiritual experience. The work tells a story from Genesis in which Yahweh makes a covenant with Abraham.

Among the works inspired by New Testament stories are Kollwitz's 'Pietà' (Mother with Dead Son), a bronze sculpture from 1937-38. Persecuted for her radical views and provocative art, Kollwitz (1867-1945) expressed her dissent through stark images of the poor and oppressed working class. This image, which draws on biblical imagery to highlight a very human experience of motherly love and loss, was later recreated in an enlarged version and placed, in 1993, at the center of Berlin's Neue Wache memorial to victims of war and tyranny. Kollwitz, whose first son died during World War I, and this image are the subjects of a chapter in William T Vollmann's fascinating novel Europe Central.1

Throughout his career, French Fauvist and expressionist painter Georges Rouault (1871-1958), a devout Roman Catholic, returned to the Crucifixion. One rendering in oil from 1937 is shown at MOBIA. Like Kollwitz, Rouault felt a bond with society's orphans and outcasts. As a teen, he served an apprenticeship in a stained glass workshop and helped to repair windows from medieval cathedrals. His style recalls the bold outlines and jewel-like colours seen in these windows.

In contrast, Sir Stanley Spencer's (1891-1959) whimsical 'Angels of the Apocalypse' (oil on canvas, 1949), injects a light, humorous touch to the exhibit that balances Rouault's somber tone and coloring. During his career, Spencer created a series of religious paintings that set New Testament stories in his home village of Cookham, Berkshire, UK and the local countryside. Spencer's home is now a museum for his work. In his eccentric interpretations, Spencer, in effect, rewrote biblical narratives to fit his personal theology of a heavenly village on earth.

Mark Tobey (1890-1976), who practiced the Baha'i faith, believed that truth is revealed over time and is a composite of the world's wisdom traditions. His abstract rendering of 'The Last Supper' (tempera on paper, 1945), testifies to this process, as one must gaze at the image for a period of time before elements of the story become apparent. As with wisdom, these elements must be teased from the picture through reflection, contemplation and faith.

Organising a show that addresses the many assumptions, perspectives and interpretations associated with 'biblical art' is a mammoth undertaking. The limited number of works shown at MOBIA is disappointing mainly because the images selected raise so many questions. But there are some successes. Placing disparate artists and works together highlights connections that might otherwise be missed. For example, Kollwitz's 'Aus vielen Wunden, blutest Du, O Volk', an etching from 1896 in which she compared workers' struggles to Christ's suffering, links her radical art and Rouault's devotional art. And showing Andy Warhol's 'Crosses (Twelve)' (polymer paint and silkscreen on canvas) from 1981-82 reminds viewers that the Roman Catholic Warhol (1928-87), himself a Pop Art icon, attended church several times a week. In fact, Warhol's religious images have been examined in a study by Jane Daggett Dillenberger.2

Certainly, the subject of 'bliblical art' in the modern age requires greater analysis. In conjunction with the exhibit, MOBIA and Fordham University's Centre on Religion and Culture organised a two-day symposium in January that integrated the themes and perspectives encountered in the exhibited works, entitled 'Wrestling with the Angel: Art and Religion in the Twentieth Century'.

As a survey, MOBIA's show functions well enough and is worth seeing. Most likely, many visitors will be moved to reconsider the importance of biblical narratives in modern art. Since the show does not include an exhibition catalogue, though, they will have to find their own way to artists and works that fill in the gaps.