To mark the 25th anniversary of Carter’s death, this exhibition brings together works that influenced the writer and works inspired by her, creating a visceral, violent and, at times, unpalatable celebration of magic realism and fairyland pornography

One of the somewhat contrary signs of success for an author is when her works are well known by the general public, even if they have not been quite so widely read as to match this awareness. Such seems to be the case for Angela Carter (1940-92), whose vivid and enduring imagery and fantastic metaphor have influenced generations of readers and visual artists – many through the active enjoyment of her written word, which paints its own pictures using syntax and vocabulary as its paintbrush and palette; others through a form of collective osmosis. To mark the 25th anniversary of Carter’s untimely death – at the age of 51, from lung cancer – and the publication of a new biography,1 the RWA in Bristol (the city where Carter studied and wrote five of her nine novels) is hosting a fabulous exhibition, comprising artworks that inspired Carter and contemporary works influenced – directly or indirectly – by her writings.

“I feel free to loot and rummage in an official past, specifically a literary past, but I like painting and sculptures and the movies and folklore and heresies, too,” wrote Carter, of her liberal appropriation.2 In her reimaginings of fairytales, she looked often to pre-Raphaelite works (see particularly their influence in her first novel, Shadow Dance, 1966), and loved all representations of fairylands, in particular Joseph Noel Paton’s The Quarrel of Oberon and Titania (1849), which she saw at the Tate in the mid-70s. This magical reverie, which certainly owns Carter’s description of fairyland as representing “a kind of pornography of the imagination”,3 forms the centrepiece of the smaller side room at the RWA, where the non-contemporary works, selected by Dr Marie Mulvey-Roberts, are displayed.

Three key works in this room are William Holman Hunt’s The Shadow of Death (1870-73), Arnulf Rainer’s Wine Crucifix (1957-78) and Stanley Spencer’s Marriage at Cana, Bride and Bridegroom (1953), all of which appear in the television film The Holy Family Album (1991), documenting the life of Christ as imagined through a series of photographs in God’s family album, for which Carter wrote the script and provided the voiceover. The first painting depicts Christ’s early life as a carpenter; the last recollects his first miracle, according to the Gospel of St John, of turning water into wine at a wedding in Cana – the idea of transformation, which is central to so much of Carter’s work. Rainer’s work, too, which, in the film has thick droplets of blood running down it, before eventually engulfing it, encapsulates the Catholic belief in transubstantiation, the miraculous changing of form from bread and wine to flesh and blood.

This notion of (meta-)physical transformation is more than amply addressed in the (larger) contemporary section of the exhibition as well, superbly brought together by Fiona Robinson RWA. Alice Maher’s short hand-drawn film, The Music of Things (Sleep) (2009) stands alongside Nicola Bealing’s painted hybrid of a fish-wolf-man in Misfits (2014), while Wendy Elia’s pre-op transsexual Maxime (2010), sitting passive and twisted, uncomfortable and stripped, brings the magical fully into the realm of the real, queering our viewing, and speaking directly of the surgical transformation of Evelyn in Carter’s The Passion of New Eve (1977), while also recollecting the ugly sisters of Cinderella, with their attempts to force their feet into shoes that simply do not fit.

Another fairytale key to Carter’s work was that of Little Red Riding Hood, which is seen here in Marcelle Hanselaar’s subverted reworking, Red Riding Hood 2 (2010), in which the young girl, no longer the innocent of the children’s version of the tale, opens her cape to reveal a red slit, her female wound, with which she is fully aware of her ability to seduce and disempower the evil wolf. “Why do they talk so much crap about innocence?” wrote Carter in her journal at the age of 21. “As if lack of knowledge could ever be a good thing? I hate innocence.”4

Two of Sarah Woodfine’s works also make reference to the tale of Red Riding Hood: Boy (2008), a three-dimensional drawing of a wolf in a cot, kept in a Perspex box, and the specially commissioned Untitled (Forest) (2016), which, along with her third piece, the snow dome, Castle (2005) – the isolated castle from Carter’s The Bloody Chamber (1979) – firmly establishes the magical realist and fanciful gothic tone at the entrance to the main gallery.

The most significant contemporary contribution comes from the Brazilian-born artist Ana Maria Pacheco, whose sculptural installation The Banquet (from Some Exercise of Power, 1985) is shown in a darkened side room. Its bald, suited, polychrome wooden figures, with real incisor teeth, is simply chilling, with its conjuring of torture, cannibalism, sexual deviancy, greed and the inhumanity of today’s dog-eat-dog (or man-eat-man) society. In the main gallery, her series of 10 drypoints, The Miraculous Journey of a Little Vixen (2014), further recalls the fairytale circus and animal-human metamorphoses essential to Carter’s oeuvre.

In a more vibrant and celebratory manner, Eileen Cooper’s Tail of the Tiger (2002) resonates both with Carter’s The Tiger’s Bride (1979), a rewriting of the myth of Beauty and the Beast in which the heroine transforms into a tiger, signalling her social, psychological and sexual liberation from patriarchal oppression, and Paula Rego’s paintings and etchings (examples of which are included in the neighbouring gallery), in which girls are often seen to triumph over their fear of tigers, lions and wolves, gaining a (sexual) agency and power. Akin to Carter’s stories, Rego’s works are imbued with a rich sense of terror, a mixture of thrill and fear, often engendering a “shudder of delight”.

Alongside the pre-Raphaelites, Carter also drew heavily from the surrealists, adopting their imagery so as both to parody and invest in it.5 Taking the inherently misogynistic genre, Carter added a dose of truth, in the form of feminist politics, creating her own special articulation of magic realism. Juli Haas’s grotesque drypoints, Women’s Place (1994), speak across time to Leonora Carrington’s The Old Maids (c1947), in which birds and women mingle, as in Carter’s version of The Erl-King (1979), in which ensnared birds illustrate the captivity of young girls. Beside Carrington’s paintings, there are two by Laura Knight, who travelled around Britain with the Bertram Mills and Great Carmo’s circuses, and the gem that is The Blue Circus (1950) by Marc Chagall – an artist Carter deeply admired, and of whom she said she hoped to emulate the qualities of his painting in her writing, not least Nights at the Circus (1984).

In her essay in the accompanying catalogue, Robinson writes: “Reading Carter is like being given constant electric shocks […] You have to read her slowly, absorbing what she says, bracing yourself for the visceral, the violent and the unpalatable.”6 And this might just as well describe a visit to this powerful and magnificent exhibition. 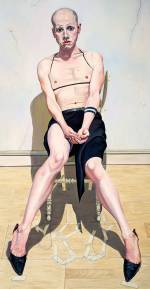 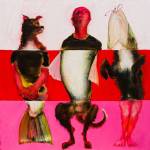 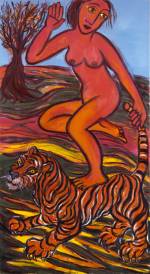 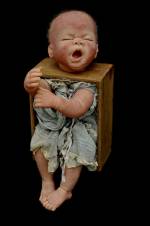 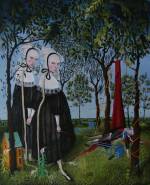 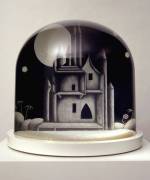 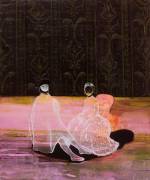