The new Pallant House Gallery was described and reviewed on this website in 2006. The magnificent Wilson collection acquisition has created in this corner of England a remarkable focus on 20th-century British art, predominantly painting. Now this show of the work of William Roberts RA, a quintessential British master, celebrates the 25th anniversary of the original Pallant Gallery by filling an important gap in the general revision and updating of modern British masters. It is worth noting, too, that the sale value of works by William Roberts has been rising steadily; at the end of November, for example, his small watercolour and pencil painting 'Trafalgar Square' (1952) sold very well within the estimated range at Bonhams, New Bond Street, London.

The exhibition at Pallant helps to underpin the special role of Roberts within the self-generating range of English painters, which followed Roger Fry's short-lived Omega Workshops experiment, and also derived from the Vorticist group. Roberts, however, took as his subject material the everyday way of community life of his time, drawing naturally on street life, pubs, cinemas, urban parks as well as leisure foci, such as the horse races and, occasionally, the seaside. There was always an affectionate approach to the human groups he depicted, with some humour, yet never descending into parody or mockery.

In Roberts's compositions, we can discover a structuring element that derives from his earliest work at a commercial art firm; following that employment he won a scholarship to the Slade School of Fine Art. There, by good fortune, he joined an assemblage of embryonic student talent. This comprised David Bomberg, Dora Carrington, Paul Nash, CRW Nevinson and Stanley Spencer, all of whom were to gain major recognition in their own right as widely differing artists. Roberts, always himself a most independent figure, carved a special niche from an early age. Very much a man of the people, from the simplest East London beginnings (his father was a carpenter), he remained all through his life a man who chose not to communicate with people. Yet, he provided us through his oeuvre with a broad yet spectral insight into the social characteristics of society as he saw it and of its changing nature as the 20th century wore on.

The curator of the Pallant exhibition, Simon Martin, emphasises in an excellent introductory article (in the Pallant House Gallery magazine) this relevance of the artist, and is fortunate to have been able to include Roberts's dramatic set-piece, entitled 'The Cinema' (1920), which is the earliest work of the artist in this show. The film being a silent cowboy saga, the female musical accompanist is glimpsed through curtains below the screen and the monochromatic expression of the silent movie is represented in toned sepia, as a maelstrom of feverish activity. By contrast, the audience, mainly male, is shown enthralled in sombre, darkening colours, not without cubist or even futurist influence. It is interesting to be able to see, in the same exhibition, Roberts'ss 'TV' (1960). Here, a similar engrossment with the screen, now contained within a living room for a family grouping is revealed, yet all is at a private scale of activity. Privacy was a permanent necessity for William Roberts himself in his career and in his closely guarded family life.

Roberts had a highly proactive start to his career, following his scholarship to the Slade at the age of 15. By the time he was 20, he had signed the Vorticist manifesto with other colleagues, together with Wyndham Lewis and the poet Ezra Pound. Did active service as a young war artist in World War I ever expand Roberts's enthusiasm for the mechanistic surge and thrust of the compelling machine age? There is no evidence of this. Indeed, a degree of revulsion now turned Roberts towards full-blown figurative art, developing human forms that were well rounded and upright, generic in a language all his own. Roberts, from his working class background (which he never foresook) was able to provide a genuine social documentation throughout his career, of ordinariness and light together, of his fellow Londoners and Eastenders. He suffered after the war, for his apparent lack of charisma, buying, too, a simple home in Camden, becoming something of a recluse - always with his wife discouraging art critics. He taught at the Central School of Art, but even with students and staff maintained a 'Trappist' lack of verbal exchange, just drawing on his students' work, and in all human contacts painfully shy and less than amiable. His work, and family, became his entirety. Yet Roberts was also an exceptional portrait painter and was persuaded to complete portraits of such luminaries of the pre-war period as TE Lawrence and JM Keynes. His self-portrait shows a cloth-capped, warily reticent, red-faced individual.

Roberts's countervailing sense of humour is apparent in many paintings, such as 'Rush Hour' (1971), one of the best depictions of the almost-disappeared and much-lamented London bus. He distrusted critics for the most part and took strenuous measures to avoid them. What speaks out from his work is a self-explanatory integrity, both visual and of technique. He had developed and mastered his personal style from a young age, maintaining and developing it all his life.

Unfortunately, his typical rejection of the entire gallery system (with the proud exception of the Royal Academy, which had perceptively elected him an RA in later life) had long-term shortcomings for his estate. A most important collection of his work, comprising some 70 paintings, numerous drawings and other documentation, still lies in the Tate Gallery cellars, inaccessible as long as the Treasury Solicitors' Department takes to decide as to the best manner of its disposal. Roberts had, typically, died intestate aged 85 in 1980. Neither his family, nor indeed the William Roberts Society, have been able to advance this situation at present. 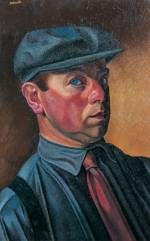 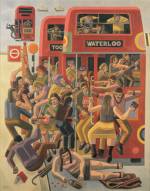 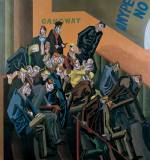