A Painter of Sorrows

A Painter of Sorrows

Only that land is mine
That lies in my soul.
Marc Chagall, poem fragment

The pictures of Russian painter Marc Chagall (1887-1985) have the simple charm of folk and fairy tales. But like many stories first heard in childhood, his visual narratives resonate on a profound level. Teeming with life and emotion, Chagall’s ecstatically coloured compositions invite viewers to access their own dreams, memories and imaginations, where light and shadow, good and evil, and joy and pain follow one upon the other, overlap and merge.

The key to Chagall’s enduring appeal as a modern and a timeless artist is the obsessive quality of his whimsical imagery and his rendering of it in a beguiling patchwork of avant-garde styles: Cubism, Orphism, Surrealism, Fauvism, Expressionism and Post-Impressionism. Although Chagall was frequently described as a fantasist, his autobiographical My Life suggests that his painted reveries are firmly grounded in reality.1 Written by the artist at the age of 35, My Life describes the foundation of his romantic and nostalgic world view: highly specific details of daily rituals and routines in his native Vitebsk, a market town in the north of Belarus.

Segregated from gentiles, the Jewish population in Vitebsk was, nevertheless, exposed to a diverse tapestry of Russian folk-art motifs, Eastern European shtetl culture and Christian iconography. As a member of a Hasidic community, Chagall was steeped in a Yiddish storytelling tradition that conflates time and place, day and night, animals and humans, dream life and real life. It would not have been unusual for him to see people on rooftops, musicians and acrobats performing in the streets, and groups of Hasidic Jews walking through a landscaped collage of onion-domed Christian churches, one-room synagogues and rustic wooden houses, the baroque orthodox Uspensky Cathedral watching over all from its stately position on a hill.

For Chagall, Vitebsk was an infinite well of inspiration for his paintings, drawings, theatre designs, murals and stained-glass commissions, book illustrations, etchings, sculpture and ceramics. With little money or encouragement for the aspirations of a budding artist in his childhood home – in My Life, he says that his family used his earliest canvases as rugs – Chagall discovered in the streets of Vitebsk his best art school. In a spirited 2007 biography of the artist, novelist Jonathan Wilson locates Chagall’s attachment to Vitebsk with a picturesque metaphor: “Throughout his painting career Chagall insistently brought the world of big history to the little streets of his old neighbourhood as he knew it in early childhood: the Holocaust takes place on the streets where Chagall grew up, and Jesus, frequently wearing a tallith (prayer shawl) around his waist, is repeatedly crucified there. If he is not bringing history to Vitebsk, then Chagall is carrying Vitebsk with him, as in a suitcase of the mind, wherever he goes.”2

Running with this metaphor, it seems likely that, wherever Chagall went, when he unpacked his memories, foremost among them would be a vivid blue sky serving as a canopy and backdrop for the many dramas, large and small, enacted on the streets of Vitebsk.

Chagall’s career spanned two world wars, the Bolshevik revolution, the Holocaust and the founding of Israel, and his works reflect the political situation and climate of his time. Deeply personal and idiosyncratic, they also convey his emotional and aesthetic response to the ironies, comedies and tragedies of human existence. For most of his life, Chagall was an exile; first by choice and later by circumstance. He could easily identify with the figure of the wandering Jew searching for solace in a hostile, anti-Semitic world. The popular perception of Chagall – colour-drenched pictures of green-faced fiddlers on roofs and romantic scenes of brides and bouquets – is only one part of his story.

In addition to the prejudice he faced on his initial journey away from Vitebsk, when he travelled to St Petersburg in 1906 to study art, he felt he could not attain a high level of mastery there in academic art circles. Fear of being arrested for not having the permit required of Jews in the city, and his constant penury and hunger (he said his dreams then were filled with sausages and bread) did not blunt the urgency of his need to draw, so in 1910 he left for Paris. He found the bohemian life and secular milieu of the avant-garde art community in Paris much more congenial, yet many of its members considered his figurative, folksy pictures to be sentimental and old-fashioned. Still, for Chagall Paris was a haven; eventually, he sought and was granted French citizenship.

In 1914, Chagall returned to Vitebsk to marry Bella Rosenfeld, whom he celebrated in some of his most well-known paintings. The first world war prevented the couple’s intended move to Paris, and once again Chagall tried to establish himself as an artist in his homeland. He gained a position with the Soviet government as commissar of arts for Vitebsk, but before long, he became disenchanted with the Soviet regime; in 1923, he and Bella left, taking their daughter, Ida, to Paris with them. Until the early 30s, Chagall’s life in France was comfortably secure. He sold his paintings, travelled in Europe, and befriended poets and literary-minded intellectuals who recognised and appreciated his synthesis of the magical and modern.

A new show at The Jewish Museum in New York focuses on Chagall’s activities during an increasingly difficult period for him, the 1930s to 1948. The 30 paintings and 24 works on paper gathered for Chagall: Love, War and Exile record the chaos playing out on the world stage after Hitler came to power; Chagall’s unhappy years as a refugee in New York, where Abstract Expressionism was attracting most of the attention from galleries and collectors; and painful losses, notably Bella’s death in 1944. A clash between bitter reality and idealised recollections of Vitebsk replaced the harmony he had achieved earlier between present and past.

Organised by Susan Tumarkin Goodman, senior curator emerita at the Jewish Museum, this exhibit places special emphasis on Chagall’s use of the image of Christ. Chagall chose Jesus on the cross to express his anguish about the suffering and persecution of the Jewish people. His Jesus is the persecuted Jew that Jewish artists of the preceding generation had explored. Such predecessors had blazed a trail by rejecting the ban on making graven images and taboos against Christian subjects, but Chagall connected Jesus’s trials to his own challenges as an artist looking for light in an increasingly incomprehensible universe.

Certainly, Jewish artists of Chagall’s generation recognised in Jesus’s story a parallel with the plight of Jews during the Holocaust. The theme was examined in a 1942 exhibition at the Puma Gallery in New York, Modern Christs, featuring many Jewish artists (but not Chagall). Characteristically, Chagall’s grab bag of Jewish and Christian symbols stood apart from other representations. Jonathan Wilson termed his vision “ecumenically elastic”.

Displayed in the exhibit with Chagall’s paintings and studies are drawings for the 1931 series Lider un poemen for Lyesin, illustrating poems by Abraham Lyesin, editor of the Yiddish cultural journal Di Tsukunft (The Future); photographs of the artist; a copy of Bella Chagall’s memoir, Burning Lights, illustrated by her husband; an invitation to their daughter’s wedding; a few of his letters; exhibition brochures from Pierre Matisse’s New York gallery and one from Chagall’s 1946 exhibit at the Museum of Modern Art; fragments from Chagall’s poems; and a sketchbook of Bella’s, begun in 1942, in which she translated French poetry into Yiddish and in which, after her death, Chagall drew.

Studio International spoke with Goodman about the sources of Chagall’s imagery, the effects of exile on him, and his use of the figure of Christ in his art.

Cindi Di Marzo: Thank you for speaking with Studio International, Ms Goodman. I have just finished reading My Life and feel as if I have been to Vitebsk. Chagall referenced his memories of growing up in Vitebsk in all of his works, but shtetl culture seems to have become even more important to him when threatened by Hitler and war. Can you describe some changes in his imagery evident in the exhibited works?

Susan Tumarkin Goodman: The artist employs the image of Jesus on the cross with much greater frequency, along with anguished scenes depicting violence and the effect of persecution on the lives of all humanity – human and animal.

CDM: Why have the paintings and drawings he made in the 1930s and 40s been downplayed in favour of works from the 20s and those made after 1948, when he returned to Paris after an unsettling period in New York?

SG: The new exhibition includes works with a complex metaphorical imagery that intimately related to the artist’s life and experiences. They have often been misunderstood or neglected in favour of the most accessible works.

CDM: Your 2008 exhibition, Chagall and the Artists of the Russian Jewish Theatre, 1919-1949, held at the Jewish Museum, highlighted the artist’s involvement in theatre design. For Chagall, life in Vitebsk seems to have been real-life theatre. Although the works on view in the new exhibition are not related to a particular theatre work or story, how did Chagall use his dramatic sensibilities during this period?

SG: There is a sense of the phantasmagorical in Chagall’s works throughout his life. In 1942, he accepted a commission for theatre design for the first time since leaving the Soviet Union when he designed the costumes and backdrops for the ballet Aleko for the Ballet Theatre in New York [commissioned by choreographer Leonid Massine] for a Mexico City performance.

CDM: What does the notion of exile – a main thread running through Chagall’s Jewish heritage and biography – add to our understanding of his work?

SG: The artist’s acute sensitivity to current events in the world as well as his exile and personal losses were all major factors in shaping his work of this period.

CDM: A commission in 1930 from publisher Ambroise Vollard to illustrate the Bible influenced Chagall’s concern for the spiritual dimensions of his art. How did working on this project affect him?

SG: The 1931 commission from Vollard for Chagall to illustrate the Hebrew Bible led to Chagall’s first trip to Palestine. The major impact of that trip cannot be overstated. In the exhibition we do not show these works; rather we find it important to gauge Chagall’s reaction to his 1931 trip by showing his on-site drawings of important synagogues and holy sites.

CDM: In the catalogue you say that for Jewish artists and writers of Chagall’s generation: “Christian images were an essential part of the acculturation process, and painting the Jewish Jesus was part of the artist’s rite of passage into modern European culture.”3 Chagall’s Cubist Golgotha was painted in Paris in 1912, when he was in his 20s. How does this work differ from later portrayals of Jesus on the cross?

SG: In the earlier work, Chagall identifies with the figure of Jesus. The artist wished to show Christ as an innocent child, and the parents at the foot of the cross are identified as Chagall’s parents. The later Crucifixion paintings depict Christ as a Jewish Jesus wrapped in a prayer shawl surrounded by symbols of Jewish suffering and engulfed in the chaos representing the Jewish catastrophe underway in Europe.

CDM: Thank you, Ms Goodman, for speaking with Studio International about Marc Chagall. The glorious sense of joy and light that he created in his paintings becomes much more precious in view of the sorrows he felt in the 30s and 40s, as revealed in your exhibition, Chagall: Love, War and Exile. 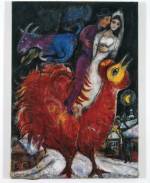 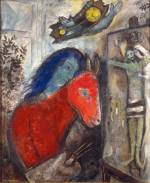 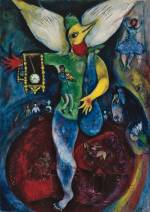 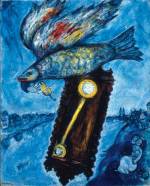 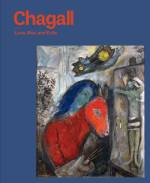