Paul Klee: The Nature of Creation

Paul Klee: The Nature of Creation

In vast contrast to Tate Modern’s Warhol exhibition earlier this year, the Picasso Matisse which is about to open and other blockbuster museum exhibitions, Paul Klee: The Nature of Creation at the Hayward Gallery was not only a beautifully curated exhibition of intimate, whimsical work, it was also a great success

Long queues formed to enter the Hayward to see the work of an artist, who for art students and lovers of painting and the drawn image, is worthy of a certain dedication. For, although Klee was never a major figure, he remains a central one in the modern movement. Before his death in 1940 he produced in excess of 10,000 works of art. Klee’s work is pure pleasure, analytically subtle and exacting.

The Hayward exhibition was jointly curated by Professor Robert Kudielka and British artist Bridget Riley. It was a superb installation – intelligent and subtle relationships were established between works, a poetic dialogue was made possible between the works and the viewer. This was an exhibition where space was established around works for contemplation, rather like the space created around characters in 19th century literature, an idea put forward by George Steiner, enabling the characters to have privacy. Hence one comes away from the show experiencing a sense of quiet enrichment.

Klee’s greatest influence on other artists was as a teacher at the Bauhaus in Weimar between 1921–31. During this period Klee’s output was extraordinary. ‘The Garden’, a metaphor for continual growth and change, was used to parallel the spiritual preoccupations of the period. Music was always a central interest for Klee who had to make the decision between pursuing a career in music as a violinist or becoming a painter.

Paul Klee: Painting Music has been launched in paperback (it was first published in hardback by Prestel Verlag in 1997) as a delightful, small, reasonably priced book. As the author points out, ‘There is hardly a twentieth-century artist who dealt so intensively with music as did Paul Klee, making explicit reference to it in both his art and his writings’.1 Klee’s mother was a trained singer, his father a music teacher. Later, he married pianist Lily Stumpf who supported them as a young family in Munich with the proceeds of her teaching. Klee continued to make music for pleasure and sometimes performed. Part of his decision to pursue a career in the visual arts and not music was that he believed that the Golden Age of music was over, and that contemporary music was ‘too academic, dictated too much by educational theory to serve as a model and source of inspiration as Schönberg’s twelve-tone music had done for Kandinsky’.2 Klee’s greatest admiration was reserved for Mozart whom he thought of as the ‘ultimate pinnacle of art’. ‘In Klee’s eyes, Mozart achieved almost superhuman dimensions as his music heralded the fusion of the heavenly with the earthly (or the infernal) an ideal that Klee himself sought to attain as an artist.’ Music in his day was, in Klee’s view, largely reproductive and would not have provided the creative freedom or challenge that it had in the time of Bach or Mozart. Klee often wrote about the relationship between art and music: ‘I am continually being made aware of parallels between music and the fine arts. As yet they defy analysis. It is certain that both art forms are defined by time. That can easily be proved’.3

As early as 1915 an admirer of Klee, Theodor Däubler wrote:

Klee disliked the simplification of Däubler’s review and other biographers who used imprecise, comparisons between his music and his art:

Artists of the same generation such as Wasily Kandinsky were also interested in the relationship between art and music. Klee was interested and influenced by various artists including Robert Delaunay, and Johannes Itten. Unlike the Romantics, Klee singled out rhythm as the essence of music to seek an analogy between music and art. Based primarily on his own appreciation of music he believed that ‘the special quality of musical expression lay in both the clearly articulated structure and the refined variation of themes, something which he noticed above all in the polyphonic fugue’.7 In his Diaries Klee wrote:

The titles of Paul Klee’s paintings in the early period reveal his quest: ‘Dogmatic Composition’, 1918, ‘In Bach’s Style’, 1919, ‘Fugue in Red’, 1921, ‘Pastoral (Rhythms)’, 1927, ‘Nocturne for Horn’, 1921. From this early period Klee laid the foundation for his artistic career. The early works saw the creation of rhythmical linear structures from motifs from nature. The remarkable sense of rhythm in visual terms is the distillation of his knowledge of the rudiments of music. When, in 1914 Klee travelled to Tunis he experienced the liberating effect of colour: ‘Colour possesses me. I don't have to pursue it. It will possess me always, I know it. That is the meaning of this happy hour: colour and I are one. I am a painter’.9 Klee embarked from that point to transform an optical experience of reality into abstract images. He was extremely prolific. Perhaps his greatest contribution was as a great teacher and writer of Diaries and theory of teaching drawing and the elements of visual imagery. The very fine, small book by Düchting, Paul Klee: Painting Music, is just one of numerous recent publications on the work of this brilliant and inspiring artist. 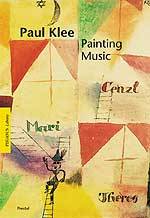