The private Klee: Works by Paul Klee from the Bürgi Collection

The Private Klee on show at the Scottish National Gallery of Modern Art in Edinburgh is the third in the series of Masters of the Twentieth Century Art, organised for the year 2000. René Magritte and Salvatore Dali preceded this superb exhibition, which is perhaps the most poignant and inspiring of the three, at this particular point in time.

The exhibition, finely curated and presented comprises over 130 oil paintings, watercolours and prints from all stages of Klee's career. The Bürgi collection is the most splendid collection of Klee's work; the collection has not been exhibited as a whole and will only be shown in Edinburgh in the UK. It is accompanied by a meticulously researched and handsome catalogue. Still intact as a private collection, the Bürgi collection was assembled by one of Klee's earliest collectors, Hannah Bürgi-Bigler, over a period of some 25 years. It was in fact the second biggest collection of Klee's work in the world. A short time after her death in 1938, Lily Klee wrote, "She was Klee's first collector and she has left a very beautiful, full collection of his works, which reflects the whole of his development as an artist".(1) Marguerite-Frey Surbek wrote in 1938:

The essay by Stephen Frey, "Hanni Bürgi-Bigler, Collector and Patron of Paul Klee: The History of the Collection", traces the close and interesting friendship between the Klee and Bürgi families, especially the loyal acquisition of the fine collection.(3)

Following Hanni Bürgi's death, her son Rolf was committed to ensuring that Klee's reputation was firmly established. He was, for example instrumental in bringing a large number of works from Swiss collections to the National Gallery in London in 1945. On a personal level, the close friendship which focused on Paul Klee's life-enhancing works of art, sustained Hanni Bürgi through the loss of her husband who died suddenly in his early forties and then the tragic death of her son Fredi in 1926, a talented young architect who had studied with Le Corbusier in Paris.(4) Created during a period in history when the overwhelming concerns related to Hitler, to the horrors of the Nazi threat in Europe, to the very basest aspects of humanity, Paul Klee chose not to mirror reality but to create an alternative to reality with an independence of vision which made him one of the most important artists of the twentieth century.

Paul Klee was born in Münchenbuchsee (near Bern) in 1879. His father was a teacher of music and his mother was Swiss. He attended school in Bern from 1886. He chose to study art and moved to Munich where he studied under Franz Stuck. After three years of study in Munich he travelled in Italy for a year, mostly in Rome. In order to develop authentically independent work he returned home to his parents in Bern where he drew and made some fifteen etchings, ten of which are in the Bürgi collection. "Klee's etchings represented the most direct expression of his insight into the world during those early years. They also reveal an astonishing command of anatomical detail".(5) In 1906 he moved to Munich where he married Lily Stumpf; they lived there until 1920, returning to Bern for the summers. Their only child, Felix, was born in 1907. Lily provided for their small family by giving music lessons.

In 1920 Klee was appointed to the faculty of the Bauhaus in Weimar where he taught until 1926 when he moved to the new Bauhaus in Dessau. In 1930 he was appointed as principal teaching in painting at the Prussian State Academy in Dusseldorf. He stayed there from 1931-1933. Will Grohmann's study of Klee is still perhaps the most interesting since he knew Klee well at the Bauhaus.

Klee spent a great deal of time talking about art. In December 1911 Kandinsky and Marc founded the publication Der Blaue Reiter, they simultaneously organised their first exhibition at the Thannhauer Gallery. The second exhibition was held in March 1912 which included a section on graphic working which Klee was represented.

(10) His use of line became freer and he produced many comic drawings and works where formal artistic concerns were paramount. His confidence had increased greatly from the close contact with Kandinsky and Marc, "During the winter of 1912-1913, Klee ventured into the realms of metaphysical conjunctions - man and his destiny, objects and their universe - and independent forms ..... The divisions between different categories of existence have been abolished; the universe has become ambiguous and transparent".(11)

Early in 1914 Klee and Macke joined their friend Louis Moilliet on a trip to Tunis. Klee wrote:

The outbreak of war did not immediately affect Klee's prodigious output although his group of friends was dispersed. Kandinsky and Jawlenky as Russian subjects had to leave Germany, Gabriele Munter left for Scandinavia for five years. Marc, Macke and Campendonk were called up. On August 16 Macke was killed fighting in France. Klee was overwhelmed by grief, as was Marc. Klee's response was to retreat into his work. He could not bear to mirror the appalling reality in his work:

Klee's friend Franz Marc was killed in the Spring of 1916, a week later he was himself called up. Klee wrote the Foreword for the Franz Marc Exhibition while he was on leave in Munich. His own army life was bearable and he continued to draw. In Cologne he saw the Zeppelin flying over the cathedral at night which he described as "a truly festive scene of evil".(15) In the museum there he studied the works of Hieronymous Bosch and Pieter Brueghel. Klee practised meditation in order to reconcile the predominance of evil in the world and "became preoccupied with the conflict of good and evil in his artistic creations; with the relationship of forms to ideas, with the problem of time in the polyphony of painting and music".(16)

At the end of the war Klee's work flowered: the African trip and the Munich experience came together in his work. He had achieved recognition and sold many works. In November 1920 he received an invitation from Walter Gropius to join the newly-founded Bauhaus in Weimar. For thirteen years Klee had the certainty of a living from teaching and he divided his time accordingly between painting and teaching. It was extremely demanding, however, for he was expected to clarify in his own mind, and be able to explain to his students procedures that he had hitherto absorbed quite subconsciously, "at the Bauhaus, he had to formulate a theory - consistent, communicable, and intelligible - concerning the use of pictorial elements for those who wanted 'to get their bearings on the formal plane'".(17)

The Bauhaus Masters' task was to formulate a completely new system of instruction: in the end they wrote their own textbooks. Klee's Pedagogical Sketchbooks (1924) was his contribution to the revolutionary teaching methods and approach to art at the Bauhaus.(18) From 1919 to 1923 Weimar was the European centre of modern art. Kandinsky had joined the staff in 1922; he and Klee became close friends. There was an unprecedented interaction between the arts at the Bauhaus and Klee was involved in all aspects of life there. The closing of the Bauhaus in Weimar in December 1924 was therefore a sad time. When it reopened in Dessau Klee and his family moved there. The "essential Bauhaus" suffered from the resignation of Gropius in 1928 and with Moholy-Nagy, Marcel Breuer and Herbert Bayer. The following year Oscar Schlemmer also moved on. Of greater significance in Klee's career was his trip to Egypt in 1928. It became in Grohmann's view "the greatest single source of inspiration in his later years".(19) Where Tunis fifteen years earlier had liberated his work, his trip to Egypt gave him the confidence to simplify his work even further, to break from a European vision.

By the time the Bauhaus closed in Dessau in 1932 and in Berlin in 1933, Klee was no longer teaching there. The troubled atmosphere that had developed had proved disruptive to his work. In April 1931 he was offered the chair at the Dusseldorf Academy of Fine Arts. He was there for two years. Although teaching was very demanding for Klee it was also a very productive time. Indeed approximately half of his entire oeuvre was produced during the years that he was employed as a teacher.

As early as 1933 Klee was criticised by the Nazis who called him a Jew and a foreigner. Hitler was elected Chancellor of the Reich in January 1933. The sale of modern art was banned so that artists had no choice but to emigrate. In March 1933 Klee's Dessau studio was searched by the Gestapo. Rolf Bürgi stepped in to secure an exit permit for Paul and Lily Klee. Klee himself underestimated the full gravity of the situation and only emigrated to Switzerland in December, instead he focused on his work and had a very productive period. Klee was denounced as a "degenerate artist" and his work pilloried. He suffered terribly as a result of his return to Bern - it was such a provincial town compared to the intellectual milieu in Munich and at the Bauhaus. He had become recognised internationally and, however safe a haven Bern provided, Klee suffered a crisis in his art, and produced little compared to his halcyon days in Germany. Book projects were abandoned. The economic crisis reduced sales dramatically. In the Autumn of 1935 Klee became seriously ill. Even when his health was restored in part in 1936 he produced only 25 works compared to 482 in 1933.(20) During 1937 Klee's health stabilised. Remarkably he produced 264 works in 1937 and 489 in 1938. In 1939 just a year before he died, the total was an amazing 1,253.(21) Hanni Bürgi was also living in Bern and so the Bürgi collection is especially strong in this later period as his German collectors were unable to buy his work so easily. The criticisms made of Klee's work in Nazi Germany are as shocking as the action taken by the Third Reich to cleanse Germany of the "psychopathic" or "degenerate art". Although Klee's life in Bern was isolated due to his poor health, he received visits from Jawlensky (1935), Kandinsky (1937), Picasso (1937) and Braque (1939). Klee died on 29 June 1940.

Several eminent historians have made fine appraisals of Paul Klee's work. The sheer volume of works is remarkable as is the intellectual breadth of Klee's writings and theories on art. Klee was a dedicated and brilliant teacher.

In his Preface to The Thinking Eye, Giulio Carlo Argan endows Paul Klee's theory of form production and pictorial form with the same importance and the same meaning for modern art as had Leonardo's writings which composed his theory of painting for Renaissance art.(23)

Although Paul Klee's time as a teacher formed an essential aspect of his career, and although his influence on twentieth century art was profound, Klee as an individual effectively renunciated the world. He sacrificed involvement in many aspects of life to concentrate on his art and in dong so created a self-contained and harmonious world in visual terms. He was concerned above all, with the essence of things, rather than with their surface appearance.

The Private Klee on show in Edinburgh this summer reveals that there was no end to Klee's power of invention and his capacity to transport one to an intriguing and marvellous world. His apparent naivety, in fact represents one of the purest and most profound insights into nature, and the mysteries of life and death with the very broadest philosophical and spiritual ramifications, achieved in twentieth century art.

1 Stefan Frey "Hanni Bürgi-Bigler, Collector and Patron of Paul Klee: the history of the collection", The Private Klee. Works by Paul Klee from the Bürgi Collection, (edited by Stefan Frey and Josef Helfenstein), National Galleries of Scotland, Scottish National Gallery of Modern At, Edinburgh, p.11. 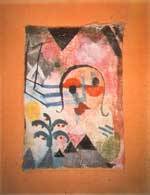