Past Things and Present: Jasper Johns since 1983

Past Things and Present: Jasper Johns since 1983

The first major exhibition in Britain of American Jasper Johns since 1977 at the Hayward Gallery is on show in Edinburgh this summer. 'Past Things and Present: Jasper Johns since 1983' travelled from the Walker Art Centre in Minneapolis. One of the most famous and successful living artists, Johns is a painter, sculptor and printmaker whose 1950s work incorporating banal everyday objects made him a forerunner of Pop Art and an iconic figure in the art world and beyond. Johns also elevated flags, targets, letters, beer cans and paintbrushes to the realm of fine art. Viewed as one of the most significant artists of the second half of the 20th century, Johns' work exemplified American Pop Art and Americanism itself. His late work, however, is more personal and philosophical. The second half of his career has received little attention in Britain to date; the 1996 Retrospective at the Museum of Modern Art in New York did not travel. 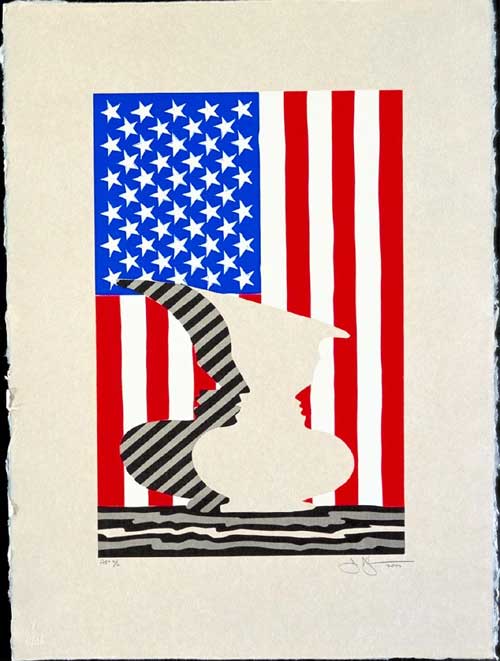 Jasper Johns was born in 1930 in Georgia and raised by his grandparents after his parents divorced when he was two. Images of his grandparents' house feature in Johns' late work. At the University of South Carolina he studied for only six months before moving to New York where he enrolled in a commercial art school. In New York he met Robert Rauschenberg and they were studio neighbours in Pearl Street, downtown from 1955 to 1958, a crucial stage of their development. Johns was greatly impressed that Rauschenberg was able to support himself as a window dresser. Rauschenberg got Johns a job doing the same; he also introduced Johns to Leo Castelli, Andy Warhol's dealer. Castelli gave Johns his first exhibition in 1958, which was a sellout. Three pieces were bought by the Museum of Modern Art, New York. He was represented at the Venice Biennale the same year. Rauschenberg also introduced Johns to composer John Cage. Cage has described Johns' ability to give almost magical effect to precise perceptions while placing these within the context of lived, everyday meanings.

Johns belonged to the same philosophical camp as Rauschenberg and Warhol. Art was a representation or expression of something; it did not belong in the European tradition of transcendental abstraction that was developed in America by Mark Rothko, Barnett Newman and Jackson Pollock. Jasper Johns concerned himself with the materiality of the object. Like Warhol, his art reflected the prosperous consumer society of post-war America. The work of Johns shares the same process-oriented approach to art as Marcel Duchamp's 'ready-mades' or John Cage's musical compositions, which he described as '… not objects, but processes, essentially purposeless'. The same definition can be applied to the work of Jasper Johns.

Perception is the central criterion in the genesis and effect of Johns' paintings… 'the perception of the object is through looking and through thinking'. 'Meaning' is a product of unmediated 'looking' and should therefore not be distorted by expectations, prejudices, knowledge, feelings or ideas. What Johns calls recreation arises during the process of working, through visual and intellectual activity. 'I have attempted to develop my thinking in such a way that the work I've done is not me - not to confuse my feelings with what I produced. I didn't want my work to be exposure of my feelings'.1

There are over 90 works in the Edinburgh exhibition, all done since 1983. Many are self-referential and form part of a dialogue with his own artistic practices over his lifetime. The first work in the show, one of many prints, is a small lithograph of 1990 which explores the theme of the psychology of perception. This theme pervades all of his work in fact. Here he uses an anamorphosis - an image that can be read in one of two ways but not both at once, for example, a picture of a duck or a rabbit. Wittgenstein's notion that recognition combines seeing and thinking is illustrated by Johns' work.

Johns uses many art-historical borrowings and references in his late work, ranging from Grünewald's 1515 'Isenheim Altarpiece', which he visited several times, Hans Holbein's 1541 'Portrait of a Young Nobleman holding a Lemur', to works by Da Vinci, Picasso, Munch and his own early work. A drawing by an anonymous schizophrenic child which psychologist, Bruno Bettelheim reproduced for an article in Scientific American in 1952, has been copied by Jasper Johns and used as a basis for a number of his own works. Bettelheim claimed that a fantastical picture such as this could not be classified as art because it was not part of a creative process, given the child's condition. Johns, however, has taken the large, strange eyes in the same way that he has borrowed aspects of Picasso's haunting portraits. The result is intentionally confounding, where meaning may not actually exist. Johns is a most accomplished printmaker, using the layers and processes of his craft to mirror or run parallel to his thought processes. Unlike his early work these are personal statements with unclear messages. 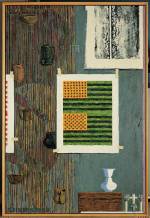 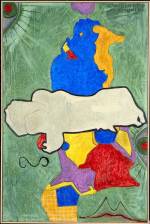 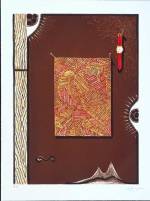