The Real World of Abstractionism: Arshile Gorky and the Supremacy of the Flux

The Real World of Abstractionism: Arshile Gorky and the Supremacy of the Flux

France annually celebrates a country with which it feels an affinity, and 2007 is the year of 'Arménie mon amie'. Accordingly, Armenian-born American Abstract Expressionist painter Arshile Gorky is the subject of a two-part exhibit, 'Hommage à Arshile Gorky', in Paris, running from 4 April to 4 July. One part can be seen at the Centre Georges Pompidou, which is in the charming and culturally agitated cartier of Beaubourg, and the other in the entrance hall of the Centre Culturel Calouste Gulbenkian, a 20-minute underground trip away. The Gulbenkian is in a building close to the Arc de Triomphe that was once home to Armenian merchant and philanthropist Calouste Sarkis Gulbenkian and is now the Portuguese Foundation. Both exhibitions demonstrate the vigour and singularity of the artist’s talent.

To view the homage to Gorky in the Pompidou Centre, one must walk down a corridor to a room inside the Musée national d'Art moderne, the centre's permanent exhibit. Important modern art works by other artists hang on the walls along the long corridor, and just in front of the entrance to Gorky's temporary exhibit are paintings by Vassily Kandinsky. Whatever intention the curators may have had, the effect of this arrangement is notable: from the moment one enters the Gorky exhibit, it becomes clear that Gorky, one of the major talents of the 20th century (and at the same time, one of the lesser known names of American Abstract Expressionism), was significantly influenced by the Russian painter, who in turn was one of the major figures of Abstractionism and of the Bauhaus.1 Highlighting this convergence is not the only or most essential result of this fortuitous Gorky-Kandinsky dialogue. On the contrary, the contrast is more interesting and telling. Such contrasts are also markedly apparent at the Gulbenkian.

Kandinsky, whom Gorky called his 'master', is just one of many artists who captured Gorky's imagination. For instance, after a period of Impressionist-influenced work, Gorky turned to Paul Cézanne; in fact, in 1927 Gorky painted his 'Landscape in the manner of Cézanne' (This work is not in the exhibit). One can detect in subsequent works that his eye was, at different moments, on Pablo Picasso, George Braque, Fernand Léger, Roberto Matta and, to an even greater degree, Joan Miró. It is easy to see in Gorky's homage the exact extent of his dialogue with Abstractionism, Cubism, Surrealism2 and Expressionism. Yet, although Gorky obviously and admittedly cited Picasso in such works as 'Nighttime, Enigma and Nostalgia' (1931; Pompidou),3 the main core of his work is a particular answer to those influences rather than obeisance or emulation.

The Gorky homage brings a very small set of works before the public. At the Gulbenkian are 25 drawings dating from 1927 until the end of artist's life in July 1948. The studies, simple drawings and portraits at the Gulbenkian function as the background for Gorky's later production and the basic principles of his creation. The set is divided in two: 15 works in pencil, pastel and crayon in the first part and ten small Chinese ink drawings in the second part. The 18 paintings and drawings at the Pompidou, made between 1943 and 1947, demonstrate what the curators call 'the maturity' of his work and consist mainly of oil paintings and crayon and pastel drawings.

Named Vosdanik Adoian at birth, Gorky was born around 1900 in the village of Khorkom, just by Lake Van in Armenia, which was at the time still under the Ottoman Empire (present-day Turkey).4 His father emigrated to the United States in 1910, leaving the family behind. Gorky and his mother escaped from the Armenian Genocide in 1915 to Russian-controlled Armenian territory. In 1920, after his mother died of starvation, Gorky left for the States. Living with relatives in Watertown, Massachusetts, Gorky started to draw and paint. Later, he enrolled at the New School of Design in Boston. When he moved to New York in 1925, he changed his name and took classes at the National Academy of Design. After that, he attended the Grand Central School of Art where, while still a student, he was offered a teaching position. His life in the States was not easy and his last years were particularly difficult: his studio burned down; he experienced a series of serious health problems; and he suffered an accident that resulted in a broken neck. In 1948, Gorky hanged himself.

Despite Gorky's tragic history, his work is not marked by pain. He could be called nostalgic, and it could be argued that his early experiences and memories - both positive and negative - inspired much of his production. For instance, the theme of 'Agony of Van' (1945; Pompidou) is genocide and 'Garden in Sochi' (1940-1941; Pompidou) is a typical work in which the abstract use of colours operates from abstract reminiscences. However, although Gorky's attachment to his Armenian heritage was probably the main justification for staging the exhibit in 2007, it is not the subject of his works that stands out here but, rather, the form they take.

In fact, form may be seen as the main subject of his works and comes from a strong tension between the abstract and the figurative. Indeed, Gorky's work could be called, in a sense, quite figurative. This tendency is apparent in such early drawings as 'Portrait of Vartoosh' (1927; Calouste) and 'The Philosophress' (1932; Calouste), as well as in 'Painter and Model (The Creation Chamber)' (1931; Calouste), in which a 'scene' or representation can be recognised. Unlike any of his masters, Gorky created forms that are not easily separated from the other forms making up the entire image. Except in those most figurative drawings and his early painted portraits, each individual form in a work is integrated with other forms and with the background. The lines born from other lines, the objects, are rather 'concentrations' produced in the general flow of his drawing. This idea of a 'concentration' is in fact the key to the works; Gorky seems to paint and draw by dispersing a movement through the screen. Every part of a work is a point of saturation at which the flux occasionally passes by. The colours of his images cannot be described as 'colouring' something, but rather as contaminating it, pervading it. In 'The Creation Chamber', for instance, the painter and model figures melt into one another as much as into the spaces produced by the flux of the drawing. 'Diary of a Seducer' (1945; Pompidou) also creates a scene, but with an ambience rather than with anything we could call a story.

At the same time, looking at some of Gorky's paintings and drawings is very like the children's game of finding objects in the shapes of clouds. 'Child’s Companions' (1945; Pompidou) and 'Vale of the Armenians' (1944; Pompidou) may have 'figurative' titles, but the forms in these works are so strongly abstract that, in fact, they suggest natural elements such as arms, legs, faces, animals and particular objects. These forms are visible because it was important to Gorky to create a space in which the flux is paramount.

Gorky had as much interest in drawing as in painting. His drawings were not a way to use colour to create expressive spaces. For him, the line was an agent as powerful as colour. He liked to draw, to create universes in flux, to work with two-dimensional painting as though it could produce the same effect as a one-dimensional line. This supremacy of the flux is especially easy to see in Gorky's studies; for instance, in 'Study for Summation' (1946; Calouste) or 'Study for The Calendars' (1946; Calouste). However, it is also visible in his works exclusively in colour crayon and even in his paintings. In this sense, a work such as 'Aesthetics' (1946; Pompidou) is almost a manifesto for his passion for the balance between one and two dimensions: the elements he co-ordinates to create a singular object are as much the pencil that traces scribbles as the yellow-green that mainly composes the background. And even in works exclusively in oil, such as 'Waterfall' (1943; Pompidou) or 'Cornfield of Health' (1944; Pompidou), or even the wonderful 'Landscape-Table' (1945; Pompidou), the tracing is still important because Gorky was strongly impelled by the non-distinction between the entities, with the result that the areas work exactly as though they were his free-flowing lines. Gorky used colour as a background for tracing, and a particular kind of colour tracing in a free creation of movement and abstract entities.

'Agony' (1947; Pompidou) is one of the best examples of Gorky's dual colour mechanics. The picture shows a background composed of brown and red. The background participates in a dialogue with some red or brown concentrations, which highlight other concentrations − those of lined entities − all of them very undefined because of the non-distinction effect. One senses that the concentrations, the more area-like parts of the image, are not really areas, but interruptions in the same tracing movement. In this tracing, the colour is not an element for caging a two-dimensional entity but for freeing the one-dimensional lines. There is tension between the use of representation, or real forms, to produce abstract aesthetical experiences, and the creation of non-representational forms to produce figurative aesthetical sensations. In Gorky's world, Abstractionism was real, and the flux was the dynamic energy behind, in and surrounding it all.

Footnotes
1. Gorky was never really counted as part of the group of Abstract Expressionists, despite his obvious contribution to the movement.
2. André Breton was one of Gorky's most enthusiastic defenders. Some of Breton's writings about Gorky are displayed along with the artist's works at the Pompidou Centre.
3. Gorky usually described this work as 'inspired by Picasso'.
4. Gorky's date of birth is thought to be April 15, 1904. One of his biographers, Nouritssa Matossian, argues that Gorky was born in 1902. Another biographer, Hayden Herrera, contends that Gorky was born 'around 1900'. The exhibit's catalogue gives 1904 as Gorky's year of birth. 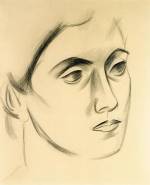 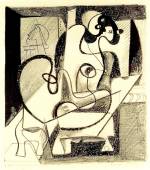