From his famed Pompidou Centre to eye-opening projects that many won’t know about, including a travelling pavilion for IBM, to the Shard, Renzo Piano’s inspiration and genius shine through in this exhibition highlighting 16 of his works 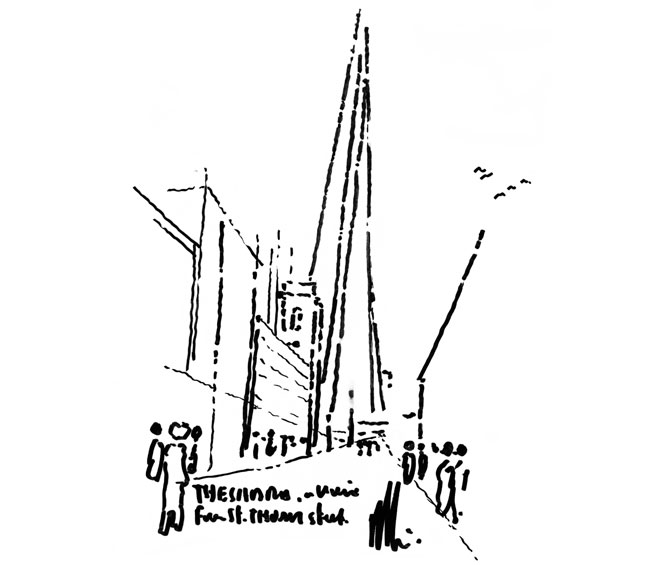 “As an architect, you spend your life fighting against gravity,” says Renzo Piano (b1937, Genoa), in a candid and engaging filmed interview that forms the centrepiece of this retrospective. Judging by the 16 buildings laid out in detail either side of this screened monologue, he has done rather better than most at winning the fight. 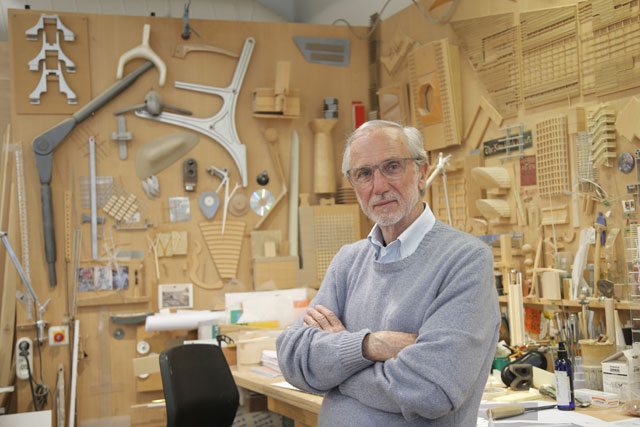 This striving to achieve an extraordinary lightness in his structures is nicely articulated by the 16 projects, selected from the 100 or so that he and his practice, Renzo Piano Building Workshop (RPBW), have achieved in a career that stretches back to the mid-1960s. Even before the Centre Pompidou (completed in 1977), which made his name and that of his then business partner Richard Rogers, he was experimenting with prefabrication and modular construction, along with his older brother and father (Piano came from a family of builders, Fratelli Piano). It is pleasing to read here that the high priest of modular experimentation, and one of Piano’s heroes, Jean Prouvé, ended up giving him that big break – he was one of the jurors for the Pompidou competition. 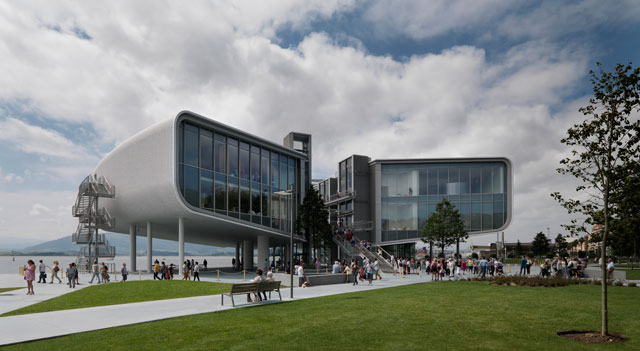 Piano’s particular experimental yet crafted aesthetic came to attention early on. Having qualified at the Milan Polytechnic, he worked for Louis Kahn in Philadelphia, and then for the Polish engineer Zygmunt Stanislaw Makowski in London. His early ideas and schemes were exhibited at London’s Architectural Association in 1969, causing the editor of Architectural Design to single him out - in an article exhibited here – comparing him to Mies van der Rohe and Pier Luigi Nervi for the extremes to which he was willing to push his architectural structures and systems while addressing the human need for shelter, comfort and functionality. 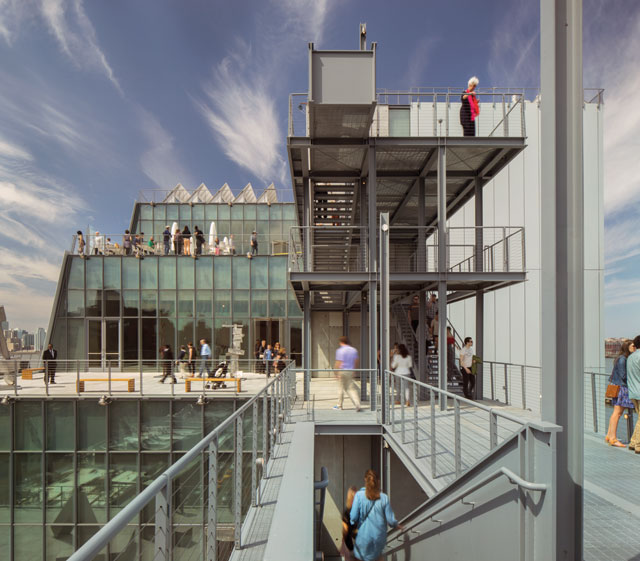 The Centre Pompidou (1971-77), for all its fame, is far from the most spectacular structure to be seen in this show. Yes, the Pompidou was “revolutionary” when it opened, wearing its structural skeleton – along with circulation and mechanical services - on the outside in order to leave exhibition halls vast and column-free. But the Menil Collection building in Houston (1982-86), or Osaka Airport Terminal (1988-94), and certainly the California Academy of Sciences (2000-08) are every bit as exciting (and have probably weathered better; the Pompidou last time I saw it was looking rather tired). 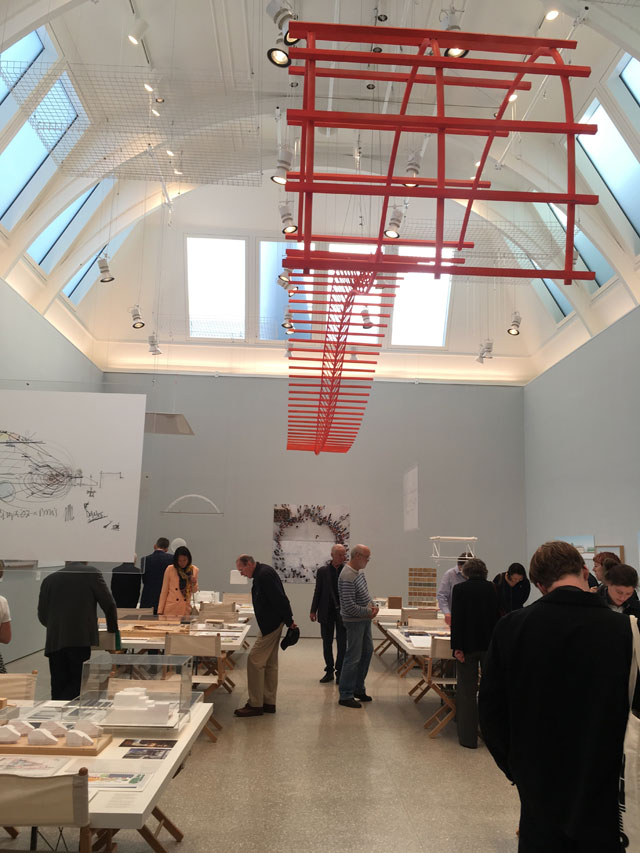 The exhibition takes full advantage of the generous ceiling heights and natural lighting now available in the Royal Academy’s Gabrielle Jungels-Winkler Galleries (created during the RA’s refurbishment and connection with neighbouring property, Burlington Gardens), by hanging the assorted components from these 16 projects, sometimes full-scale mockups, in the rafters; their finely honed forms dangle over tables richly festooned with plans, sections and models, plus a judicious (but not overwhelming) amount of text. Each building is given its own table, and a generous helping of chairs to invite in-depth contemplation. The effect could be a tad dry and scholarly if it weren’t for the aforementioned suspended components, occasional chunks of raw material (for example, a section of the California Academy of Science’s roof-planting system, complete with live vegetation) and huge, often colourful diagrams on the walls. 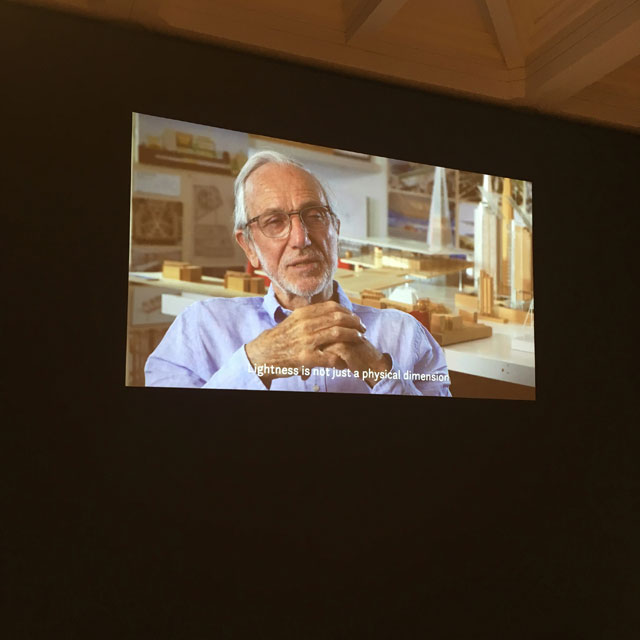 The craft and making that goes to the roots of architecture are of vital importance to Piano – it’s not for nothing that he named his practice Renzo Piano Building Workshop. In the film, he expounds on the continuing importance of drawing by hand, and his sketches and scribbles - often covering briefing notes or documents in thick, green pen - make a pleasing, improvisatory contrast to the fine-lined precision of the plans and sections on each desktop display. Although he embraces new technology, in the film he talks with distaste about computers that can draw finished buildings “at the push of a button”. He has no time for these instant architectural fantasies. “They never tell the truth,” he says. 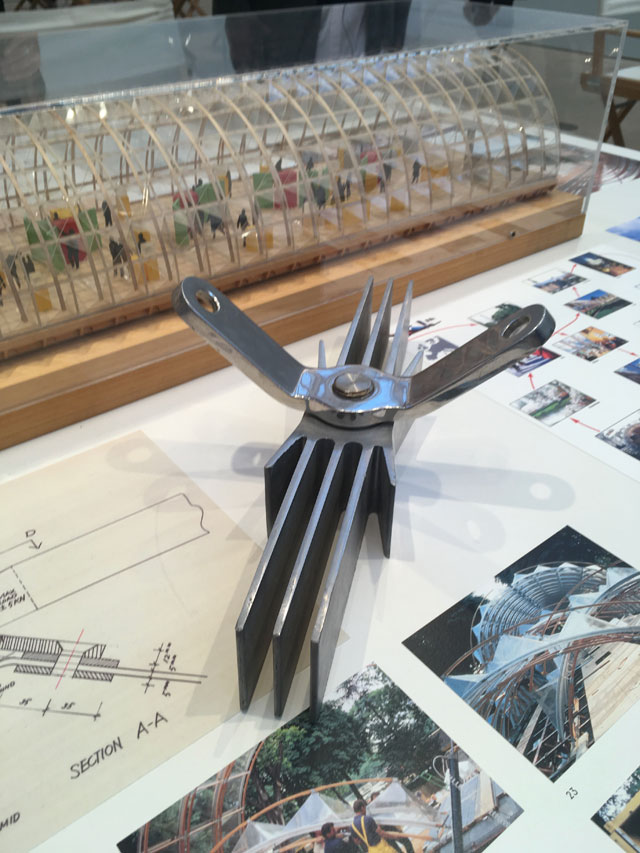 There are eye-opening projects here that many won’t know about, such as his radical, portable pavilion for IBM (1982-86) – back in the day when computers were seen as potentially the answer to all our problems and not, as increasingly today, the primary causes. With the frame’s organic, timber shapes and moulded polycarbonate covering, this pavilion, which travelled to 20 European cities in 14 countries, combines excitement for progress with a passion for the sensuality of natural forms; photographs also show it sits spectacularly well within some of Europe’s most conservative, historic architectural settings. 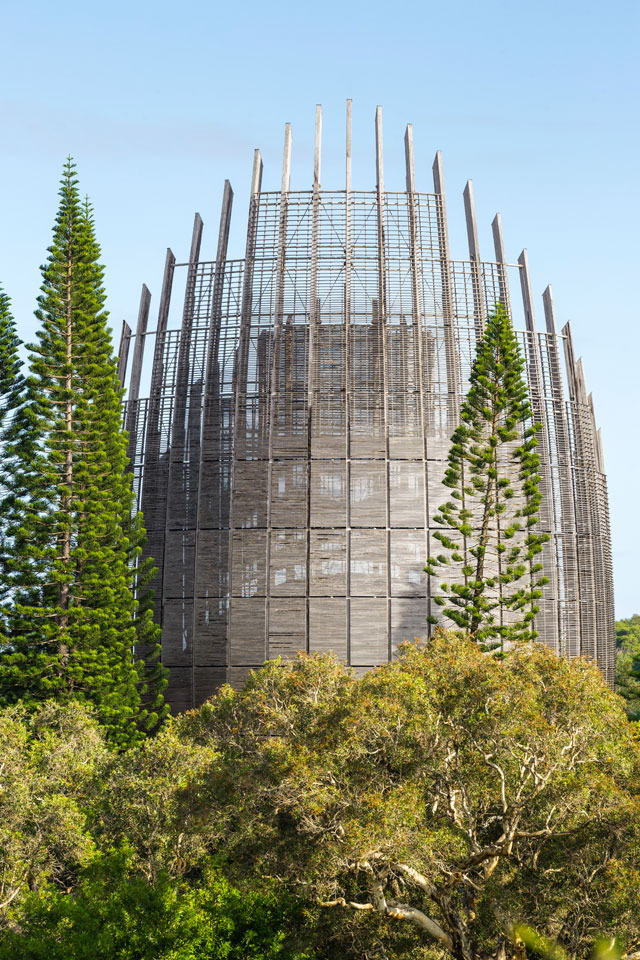 Another discovery (for me) is his sequence of delicate cultural pavilions for the Pacific island of New Caledonia (east of Australia and north of New Zealand). The Jean-Marie Tjibaou Cultural Centre (1991-98) celebrates Kanak art, theatre, music and movement in a string of pavilions, clustered together in a complex of covered trails, outdoor rooms and gardens. Ranging in height from 20 to 28 metres, their curved and slatted facades are deeply rooted in local forms and building techniques. In an earthquake-prone part of the world, they sit lightly on the landscape, comprised of (insect-proof) iroko wood, with aluminium, steel and glass. They are among the most elegant architectural expressions I have seen of buildings that combine ancient with modern, culturally specificity with universal appeal. 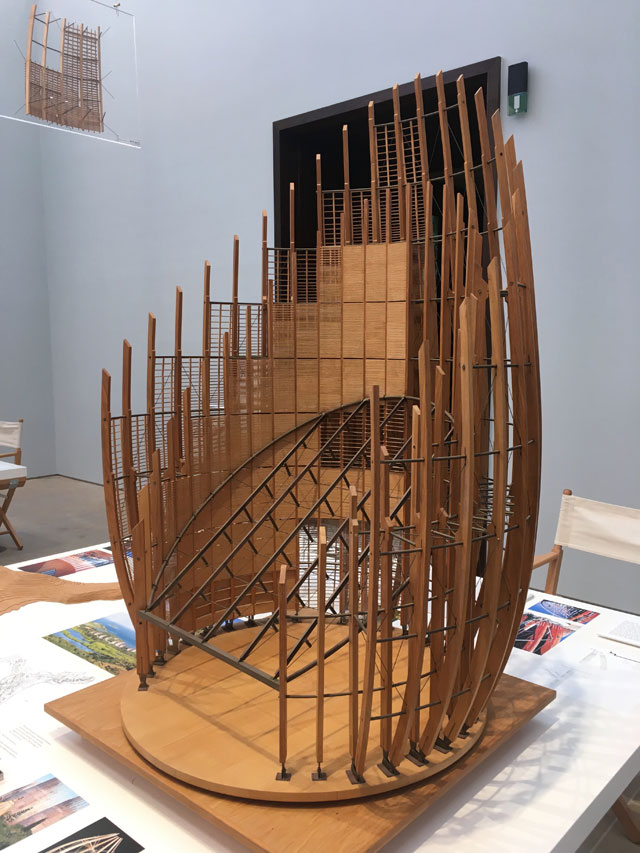 It is unusual that a cultural programme be contained in several structures, not just one. But the scale is a crucial part of their appeal. And in his interview, Piano talks sternly about the vital importance of scale: one of the worst things an architect can do, he says, is misjudge the scale of a building. Because once it is constructed, that’s it – too late to change. Which brings one to the Shard (2000-12). At 95 storeys (the 72nd the highest habitable one) and 309m high, it is the tallest building in the European Union. Many denigrated the building as it completed; and one would have to take issue with Piano over its lack of the public space he claims to care so much about – it is, right down to its security-guarded entrance, a private, luxury experience, whether as visitor or tenant. 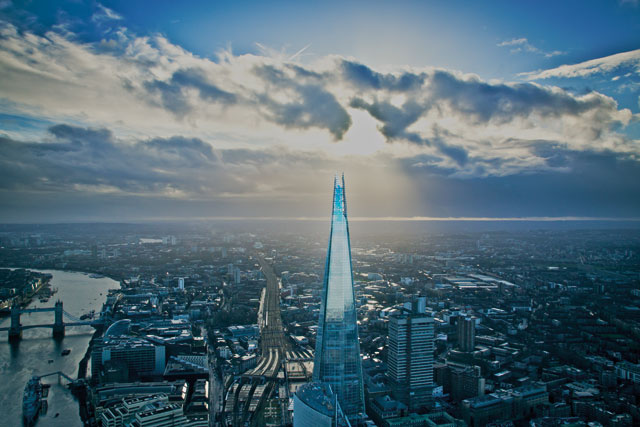 But it does something no neighbouring skyscraper does in London (which now has an epidemic of them): it doesn’t loom or leer over its neighbours (the antithesis of Rafael Viñoly’s vulgar Walkie Talkie building on the other side of the river). It plants the bulk of its contents in the base, on a level with most of its newer neighbours, while its upper stories retreat tastefully towards the heavens. 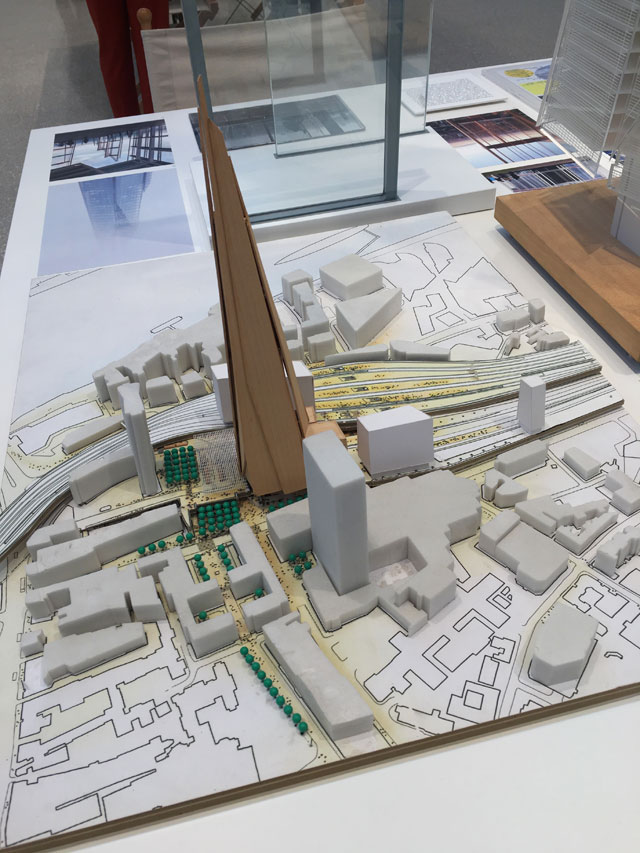 I have come to rather like its shiny, glittering needle point in London’s skyline, telling us, its inhabitants, from wherever we stand, how close to the centre we are. I find that poetic, as I do the articulation throughout this exhibition of how unbelievably complex the craft of architecture is to execute well: a synthesis of so many disciplines and considerations, technical, social, aesthetic and cultural, with just that vital touch of inspiration, or genius, which can never be measured, formularised or quantified, but without which our cities and spaces are so much the poorer. 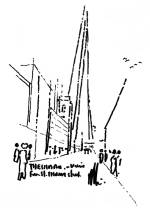 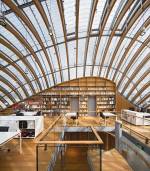 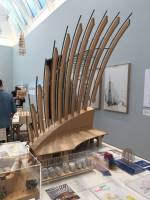 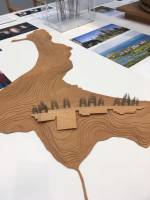 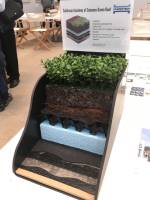