This summer, Anri Sala is the focus of the Pompidou’s efforts to celebrate the work of current French scene artists. The exhibition of Sala’s art – which takes place in Galerie Sud of the Pompidou Centre – comes after similar shows for Philippe Parreno in 2009 and Jean-Michel Othoniel in 2011, and will be followed by exhibitions for Adel Abdessemed and Mircea Cantor later this year

Although Sala grew up in Tirana, Albania, he studied at L’École nationale supérieure des arts décoratifs in Paris in the 1990s, and will represent France at the 55th Venice Biennale in 2013, his work is particularly at home in the enlivened space of the Pompidou. The exhibition, in some ways an installation itself, is made up of four films, together forming a loop of one hour, and complimented by other objects, experiments and photographs on show. The four films – shot in Sarajevo (1395 Days without Red), Berlin, (Answer Me), Bordeaux (Le Clash), and the famous Aztec site of Tlatelolco in Mexico City (Tlatelolco Clash) – are played in accordance with a carefully designed “spatializing of sound” for optimum effect. As Sala explains:

“In this exhibition, a film invites the visitor to move from one screen to another through the open space of the Galerie Sud. It is sometimes interrupted by another film projected onto the same screen. Then the visitor is lured by another film and so on. The films are nestled within each other, creating a one-hour loop leading the spectator and inviting him to move through the exhibition that progresses simultaneously both in narrative and space.”

Galerie Sud has been designed not just to house Sala’s exhibition, but to embody it. The space becomes a music box, or so Sala hopes, where not only these films play, but also a symphony by Tchaikovsky, in turns with an orchestral version of the Clash’s Should I Stay or Should I Go? and various evocative drum rhythms. No awkward silences in this exhibition, unless specifically planned. (And Sala’s hypnotic moments tend anyway to verge on the delicate rather than the jarring, anyway.)

In this show the Pompidou has given Sala the freedom to epitomise his signature use of image, sound and architecture in his work. It accommodates his iconoclasm, lets Sala be creative with the structure placed around him, rather than confined by it, as artists tend to be in most exhibition spaces. The Pompidou has a reputation for being experimental and open-minded when it comes to curation and management of space, and their approach to the Sala show exhibits that creative ideology brilliantly, and their ability to work well with the artists – for a creative collaboration and freedom of design.

As Sala says, in an interview with Christine Macel:

“I conceive each of my exhibitions not as a presentation or a collection of existing pieces, but as a work in its own right. My intention is not to highlight one of the films or objects exhibited, but to create a special correspondence between them and to give the tempo to the spectator while suggesting a path through the exhibition, pretty much like a choreography actually.”

So there really is a healthy dialogue between curator and artist, rather than simply a business-like engagement. Likewise, the relationship between spectator and artist (and space) is also fluid and free. Visitors experience Sala’s art through music, visual art, and perhaps most excitingly, in simply being placed in the space of the exhibition. The visitor is in some ways naturally subordinate to the exhibition, and the space it controls. The space between artist and visitor has been emptied of barriers; the art is not only on walls. This is not new, exactly – we have seen Arteaux do this in theatre, and Carlos Amorales, more recently, at Yvon Lambert, through his playing with sound and space. But the Pompidou has enabled Sala to experiment and play on a grand scale, to dominate Galerie Sud with exciting new ideas about space and sound, and that expanse of freedom is perhaps what makes the Anri Sala exhibition particularly magnificent. 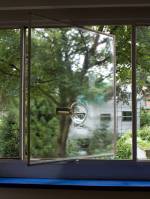