The Pompidou's Munch retrospective entitled L'œil moderne stares defiantly at the Norwegian's life with (forgive the translated pun) fixedly modern ideas. The curators in their Introduction humbly claim to offer "a new slant on the artist". Apart from Munch’s 1,100 paintings, he also created 18,000 prints, 4,500 watercolours, woodcuts, drawings, and several sculptures. He also took many photographs, and was fascinated by cinema, newspapers and print media. Yet from the perspective of most art criticism Munch appears forever young, in that clichéd artistic tradition of frequent sex and early death. This show aims to amend this misconception. Their approach is nothing short of revolutionary in its fervour for redefining Munch as a modern and thoroughly diverse artist.

Though not chronological, it is truly retrospective: it selects work from all periods of this long life, whilst also conceptualising the artist via the events that he predicted - allowing today’s hindsight to reveal Munch’s prophetic insights. It is to the curator’s credit that we are able to feel so indignant about the neglect of the artist past his youth. However, the show fails to fully address some of the issues it raises. Perhaps this is simply the French being subtle, but could they not at least put up a poster for the Walter Benjamin retrospective nearby. His seminal work The Work of Art in The Age of Mechanical Reproduction answers many of the questions this exhibition raises.

After a grainy, looped home video of Munch at his desk, the first room, Prologue, daringly shows all of his most legendary paintings together – Vampyr Madonna and The Sick Child all together at the start, the notable absence being The Scream, which is refreshing and apt for a show attempting to reinvent Munch. As an opening gambit these traumatic, lush masterpieces are a real punch to the stomach. It is, to my mind, the single most beautiful room of an exhibition I’ve ever seen. It serves also to get the classics out the way preparing the viewer for a new historiography. In the next room Reprise, feels like a warped mirror of the first, containing versions of the works in Prologue but painted a decade or two later. A 1916 version of Puberty (contrasted with its 1894 original) shows Munch employing post-impressionist techniques; brighter pallets and wider, harsher brush strokes to reflect changing popular taste.

I was not the only visitor to spend some time patrolling the two rooms, inspecting the development of each image, then stepping back to view the two rooms simultaneously, giving the sense of a carnivalesque hall of mirrors, then patrolling again, and again. I have always been drawn to the repetition of Munch, from which one can draw countless conclusions: the repetitive, morbid hedonism of his love-life, his view of industrialised work as a mindless prison, a manic existential search for meaning, or the alienated boredom of urban life. Munch wrote in 1935 that he never made copies of his work, only reproduced the same subjects again for artistic reasons, to delve more deeply into a subject matter.1 His paintings convey the complex process of remembering – at 27 he proclaimed “I do no paint what I see. But what I have seen”.2 Perhaps it has been these nuanced features of Munch’s work, beguiling once realised but subtle and hidden, that has to date caused us to forget much of the late Munch. But it is these very issues that cause the curators to claim the he was “among the artists of his generation, without a doubt, the one who, with the most acuity asked the following question, which was a major one, when it comes to 20th-century art: what will become of painting, in an era of reproducible images?”

The third room, Autobiography, displays a selection of self-portraits. Watching the artist play with the shadow of his hat on his face in a series of arms length photos is touching and intimate. His relentless self-examination is egotistical, but egotism alone does not explain his obsession. It can be read as an extension of the Romantic individualism that underpins today’s celebrity culture: a thorough examination of the self, searching to find its most basic essence, stripped of its unique humanity, and becoming therefore universal. His explorations of the self are forerunners to what has been called “The Century of Self” that would follow him.

The fourth room, Optical Space, includes various portraits of factory workers. In his Workers Returning Home (1913) the middle class figures shrink into the sidelines - the past; whilst the depressed, exploited workers seem to walk out of the front of the canvas - into the future. Munch self defined as a radical and later wrote to a friend that "now is the time of the workers".3 Representations of time are rife in his work. In a late self-portrait the elderly Munch stands between his bedside and a surreal clock, stripped of its face. Here we see his virtuoso knack for borrowing from other movements, whilst remaining manifestly, himself. From the Symbolists he borrows the Art Nouveau technique of flattening "forms and spaces into two-dimensional patterns, in order to portray subjective concepts instead of objective percepts".4 He then remains distinct from symbolist tradition by (mostly) painting from reality, rather than composing allegorical compositions. Unlike the Symbolists and expressionists he painted from life, and unlike the naturalists he painted his subjective reaction to it, but he’s not quite a Post-Impressionist. Thankfully, rather than bog us down with fastidious generalising such as this, we are shown more intriguing and unexpected comparisons: A 1900 Edison video of the Boer cavalry charging is likened to Munch's Galloping Horse (1910), in which a horse gallops down on the viewer dramatically. Without offering a new terminology to describe Munch, by charting a conceptual, historical materialist narrative of his life, this exhibition provides the conditions for such a language to develop. His works are considered against various events, such as the frequent strikes in pre-war Norway – but more importantly by developments in technology.

Rather than a study of modernity in Munch per se, the exhibition presents the relationship between Munch’s art and technology. Technology in the wider sense of the term, his own body- the hand shot by his lover, his deteriorating eyesight – and also the technology of external tools – the cinemas Munch frequented and the photographs he took (tellingly, the show even lists the specific model of cameras Munch used). This broad retrospective follows in the tradition of Marshall McLuhan. Writing only 20 years after Munch’s death, surely both he and Munch would have agreed that the medium, albeit Edvard’s fascination with the camera, his own body, or even his own work, is in this case very much the message. 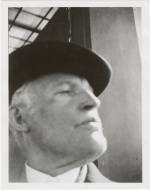 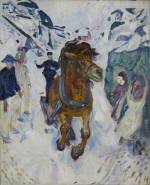 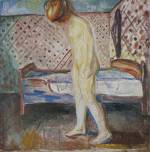 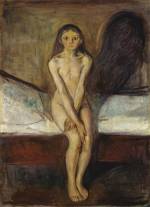 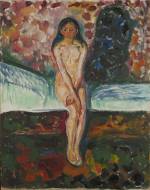 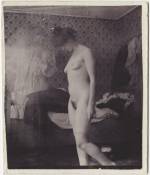