Munch: The Problem With Women

Munch: The Problem With Women

This timely showing of 60 various graphics in all, some six of which are from the Gallery's own collection, focuses on Munch's lithographs, woodcuts, dry-point prints plus one etching, from the years 1895–1915. Here therefore, is a compelling cross-section of Munch's range of prints. It is essential to be able to correlate such innovative, technically inspired applications with the paintings from which the ideas for the prints are usually drawn, both in terms of structural composition and colour

But the value of the printed image to Munch also lies in its reliance on black monochrome: in Munch's prints, this most effectively conveys the spirit of gloom and depression, as well as of unrequited love, that pervades many examples. The process onward to hand colouring may in fact be interpreted as a compulsive personal act to alleviate the welter of dark mood. Indeed, as the catalogue/hand sheet notes rightly emphasise, this technique even allows "the ambiguity between love and pain, coupled with a sexual current", reached in the painting Love and Pain to be more directly expressed as in the Vampire II series (1895) – hand coloured here in pink, on black-printed lithograph – than by the further, more fully coloured version. There had then followed also in l895 a haunting female nude figure, Madonna (1895, lithograph on paper, printed in black in Berlin). However dramatically effective Munch's use of colour was, this option for black to express a mood of despair persisted, and worked with many successful results. It was significant that his depressive tendency was frequently induced by women, or by Munch's personal lack of success in love thereby, as reflected in his own affairs.

Here an important stage came when the talented English violinist Eva Mudocci was introduced to Munch in Paris by his friend the composer Frederick Delius in 1903. Munch was so inspired by her then as to make the famous lithograph exhibited here, The Brooch, otherwise known as The Lady with the Brooch. It is identified in the catalogue/hand sheet by the full title: The Brooch /Eva Mudocci (1903). By then Munch was already in Berlin, but still had his studio in Paris. Munch wrote to Delius in an undated letter1 presumed of December 1903, and referred to Mudocci:

"But I always have feelings about the enemy – Woman I think you know Eva Mudocci and her friend B. Edvards – they are here – Fraulein Mudocci is wonderfully beautiful and I almost fear falling in love – (one of thousands). What do you think?"

Bella Edwards and Eva Mudocci comprised a professional musical duet (Edwards on piano, Mudocci with violin) who settled that year, 1903, in Paris. There is a lithograph by Munch of the two musicians (1903) entitled Violin Recital. Munch and Mudocci became lovers, it seems, and this affair continued on/off until l908-9. In 1908 Munch suffered a nervous breakdown, which was surely not caused purely by overwork, but also was affected by their mutual relationship, which appears to have been loving but incompatible. Their closest years were from 1903 and later through 1908-9, and the pair kept in contact until 1927. Munch is recorded as having met Mudocci and her two subsequent twin children interim, in Denmark or Germany.2 There is growing evidence today that Munch was actually the natural father to these two children, born in 1908, although Mudocci is indeed understood never to have told Munch, who was therefore recorded on his death as “died without issue”. A current press item dated 28 August 20123 indicates that interest is rising in Norway currently about the agreement of a British-born nun, Janet Weber, aged 72, who is the grand-daughter of Eva Mudocci: she is now agreeing for the sake of her great-nephews and great-nieces to submit to DNA testing, with evidently pleasing reactions to the news of her decision from leading Munch family members in Norway. Janet Weber's mother, Isobel Ellson, was indeed born in 1908, which would fit age-wise to the supposition of parenthood.

What is important here is that, apart from The Brooch, the dark lithograph, presumably done when Munch was already besotted with Mudocci, she was the continuing inspiration for other lithographs. Mudocci had later said:

"He wanted to make a perfect portrait of me but each time he began on an oil painting he destroyed it, because he was not happy with it. He had more success with the lithographs, and the stones that he used were sent up to our room in the Sans Souci Hotel in Berlin accompanied by a note that said: "Here is the stone that fell from my heart."4

Interestingly, contemporary British painter Peter Doig has recently been quoted as saying: “He (Munch) never strove for perfection. In his paintings, every step of the way is there”.5 Doig’s implication is that painting is not about perfectibility: but to do with carrying an idea, an image, forward for as long as it persists. Munch could abandon a painting while continuing its image graphically, in printed media, experimenting further. It is no surprise that Munch and his method remain an inspiration to contemporary artists still, and that, “perfection“ in a modernist sense is not the point. Continuity was of the essence for Edvard Munch in his method.

No prints executed since 1903, other than The Brooch / Eva Mudocci, appear in the Gundersen collection, on exhibition here. Indeed, none seem to relate to the named The Brooch, such as does the haunting, Madonna, Loving Woman, (1894-5) in the Munch Museum, as is the related painting, all dated before 1903. Perhaps Madonna was typically a dream figure, and The Brooch its extraordinary fulfilment, as a masterwork with an apparently close living likeness of Eva Moducci. In which case Munch would have been even more captivated by that coincidence, confronted with this beautiful muse as the embodiment of his vision. Here the collection does also reveal how Munch had used black-printed woodcut and/or lithography as a base for hand-coloured experimentation, before painting, or if need be, subsequently. Meanwhile that particular lithograph, dark, uncoloured entitled here in full, The Brooch. Eva Mudocci remains another timeless, haunting and invaluable rare work by Munch, a splendid acquisition by PG Gundersen. The collection as a whole lends fuller credence of course to the increasingly realised modernism of Edward Munch, coupled with and proven by his powerful and inspiring symbolism.

At a time when a pastel version of The Scream, one of four Screams, was sold this May 2012 at Sotheby’s, New York for $120 million (£76 million), a world record for a work of art at auction, there is food for thought, not least for critics who had wilfully downgraded this Norwegian master. It is no surprise either that Munch's persona and his intimate life become ever more fascinating. Hopefully DNA will now tell. 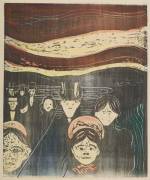 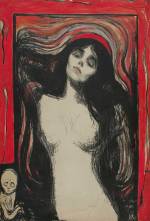 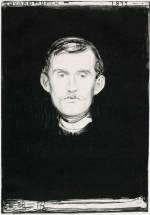 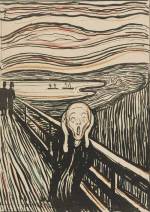