The expansion and enrichment of current discourse on the above subject has been notable where landscape design is concerned on the larger scale but there is a paucity of material that allows garden design itself to remain adrift in a sea of confusion. There was once in the 18th and 19th centuries, a solid theory, based on practice. This was also exportable, as when Thomas Jefferson took back to Monticello a copy of the Englishman Thomas Whately’s "Observations on Modern Gardening" In the twentieth century only Sir Geoffrey Jellicoe, the Americans Garret Eckbo, Dan Kiley and later Peter Walker had explored in depth the smaller scale. Gabriel Guvrekian at Hyeres in France famously created a Cubist garden in the heyday of modernism., c.1925.

The Director of Dumbarton Oaks Michel Conan is an outstanding theorist and critic in the field and Director of Garden and Landscape Studies at Dumbarton Oaks.(www.Doaks.org). In 2005 he organised there a key Symposium on this subject. This publication (2007) is the 10th volume in a distinguished series of Symposium volumes on various aspects of Landscape and Gardens. The Symposium on which this volume  is based was held in May 2005  and contains the various papers delivered at the Symposium, thoroughly edited and compiled by Michel Conan himself. Dumbarton Oaks is  an affiliate of Harvard University whose Trustees oversee it. This appears to have been an admirable arrangement as the record of the ten Symposium volumes demonstrates. A number of the speakers whose papers from this 10th Symposium are included, are Senior Fellows or Fellows of the institution. The series of Symposia and Volumes has made a major contribution to thinking about Landscape and Gardens, breaking new ground in areas where serious theoretical advancement of the subject has been wanting, For many decades this gap has been apparent.

Michel Conan himself summarises the thinking of the Symposium in a substantial introductory essay. He substantiates the case for a much fuller scrutiny of Garden Art in its own right, as something distinctive itself from contemporary art, while related to current preoccupations within this field, especially those of Land Art and Installation Art. Conan here singles out a crucial definition of Garden Art, the impossibility of such material as art work being incorporated on its own terms in museums.This is seen as a both a major disadvantage, as well as a clear defining factor. Conan determines the experiential connotation of gardens, where they can facilitate for the observer a closer awareness of nature itself, or not so, as is equally often the case. The actual determinant lies in the degree to which any garden will invite a broader interaction amongst the public. For example the book reveals how Ian Hamilton Finlay in Scotland immerses the visitor sublimely, almost fatalistically, in the contemporary plight of all humanity. By contrast, the nearby garden at Portrack by Charles Jencks( also included in the book) confronts the visitor with a plethora of cosmological models and paradigms which may confuse rather than explain: the overall creation is superbly executed. But there is no deep engagement with the senses, other than via some impressive earthworks. Humanity at large would seem somehow irrelevant in the cosmological process alluded to, irrelevant nonetheless; humanity likewise.

Conan here identifies the body of work of the American philosopher John Dewey, currently enjoying something of a renaissance of interest. Of particular relevance to the appreciation of contemporary landscape art and garden art is Dewey’s emphasis upon the  placed upon importance of the examination of the actual aesthetic process involved  in experiencing the artwork rather than the work of art per se.1 Indeed, Conan refers to Dewey’s concept as a common thread linking most of the contributors’ direction of thought. Dewey does seem more relevant today than ever before. In  Europe  his recognition was mixed, with the notable exception of that by the great landscape architect and theorist Sir Geoffrey Jellicoe (1900-96) . In explanation of how Dewey’s  proposed experiential basis for appreciation can work, Conan in the first section of the book,has taken up three case studies. The first, of landscapist Claude Cormier explores how a  garden can operate as art. As exemplified by design works at  Benny Farm in Quebec. This entailed  a network of interlocking pathways, convenient for the elderly residents, and interspersed with 400 trees reminiscent of a previous orchard. This and two other examples selected by Conan bears out Dewey’s argument.

Conan has long shown, in his studies of the work of French landscape artist Bernard Lassus,how the enhancement process for experience in art can work to the benefit of the Art form itself. Studies by Christian Tschumi of the Japanese gardens of Shigemori Mirei and also by Priyaleen Singh on the gardens in India of Mohammed Shaheev bear all this out.Landscape and Garden design is used to facilitate the raising of a new perspective for observers , not inhibiting their vision., but enabling this achievement, for a twenty-first century audience.

Udo Weilacher presents a further expansion of the dialogue between architecture and nature, a longstanding yet contemporary dilemma.He looks at the projects of the Swiss designer Dieter Kienast, who was notably prescient in his focus on fragmentary elements, the transparent and the incomplete, drawing out in a composition inherent ambiguities and ambivalences.

In a masterly essay,"A Garden of the Hesperides" Stephen Bann,describes  a project of the Musee Gassendi at Digne, with the National Park of the Alps of Haute-Provence. In order to consider the extent  to which contemporary landscape and garden design can be like painting,or even gardening, the process of a synthesis between nature and culture, science and the visual arts intertwined.Bann sees this as essentially heterogeneous, the result of syntheses spinning off a multiplicity of cultural intentions. This is. Perhaps, in marked contradistinction to Jencks’ approach as shown at Portrack, yet closer however to Ian Hamilton Finlay’s "Little Sparta" experience. That contention is also evidently supported by the literary analogy presented by Jacques Leinhardt,"The Planetary Garden, Garden unknown" This deals with the work of Gilles Clement, which concerns in a manner both science-based and lyrical, with the cosmic preoccupations of humanity today, which are less ambitious than the aspiration of Portrack in that direction, but perhaps more realistic.

Conan himself pinpoints the essential prerogative for the definition of a garden in terms of aesthetic experience. The necessity of delimiting, or framing the subject, and the vital description of that garden experience as a process, in all its multiple perspectives.Physical engagement and also resistance must be seen to be central to the process of perception. Including that of the actual materiality of the garden in its arrangement.

This work is a powerful  evocation of the new essence of garden theory, developing of its own initiative (through the theories of such as John Dixon Hunt at the University of Pennsylvania). Much new ground has been broken, and powerful new developments are emerging. Clients are more understanding of the new thinking too. This volume is an essential reader to the global groundswell of contemporary thinking in the theory and design of gardens and landscape., for artists, professional designers, and students. 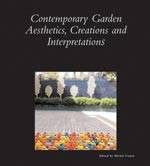