Landscape design has advanced dramatically in the past generation and Europe’s doyen, Professor Bernard Lassus, from his atelier in Paris, has been a primary instigator of this quiet revolution in the art. Indeed, as both architect and practised landscape designer, through a plethora of highly innovative built schemes and installations, he has given it new meaning.

With his colleagues, he has built the process into an essential practice model for application across Europe, transforming both teaching and the parameters of such applications to infrastructure, urban site issues, and the actual physical linkage of human activity across the landscape, and where environmental issues are most contentious.

Appropriately, this new project in Sweden has now been realised along the most northerly European autoroute, the E6, which extends up the long west coast of Sweden, from the port of Trelleborg in the south to neighbouring northern Norway. In 2011, a new section of the E6 was opened. Along a stretch of some 9km (approximately six miles) and across an agricultural landscape of ancient, post-glacial history, it was recognised that there were some 20 pre-existing archaeological dolmens (tomb markers) defining earthworks with Stone Age standing stones. These were serially disposed along virtually the same route as that of the E6.

The Swedish Department of Transport astutely recognised the value of such elements, both touristically and therapeutically, for drivers along this same ridge that had, in ancient times, provided a secure route across what was at that time marsh and Lakeland. Some 20 grouped megalithic dolmens had lined the E6’s prehistoric antecedent, a kind of marked up arterial way for nature’s footpads. Here, Lassus deduced filmically that “cinétiquement”, a serial progression of four prominent installations already thus set at intervals along the E6 could present direct imagery to passing traffic, with the significance of major road signs. This would also, in this prehistorical pan-European context, extend Sweden’s own historical time frame here by some millennia. In a unique step for the country, Sweden’s direct link economically to the contemporary exploitation of the mineral-rich Norwegian Arctic lands would be consolidated as a post-historic reality. Indeed, given the climatic variations experienced in such Scandinavian latitudes, the experiences articulated by Lassus will certainly be further dramatised by specific lighting when enhancement is appropriate, whether in pitch-dark winter evenings or the midnight sun.

The four elements of this project as installed have taken on symbolic meaning. First, they symbolise the primeval natural tracks of reindeer, wolves and elk. Second, they are symbolic large-scale representations, mise-en-scène of the prehistoric arrowheads and other implements found en route. Third, they symbolise the evolution of modes of transport via the wheel, from cart to lorry, most relevant here. Fourth, they represent by means of a sequence of such simulacra, the dolmens, both in stratified form and sectionally, given their original volume. Reindeer antlers, as created well above “kitsch” representations, will be positioned to attract the viewer without unduly distracting the driver, given the setting of a practical speed limit over this specific but short stretch of motorway.

These installations were inaugurated in May 2013, thus advancing the landscape design principles now established in France by Lassus. Indeed, this is not the first occasion on which he has worked in an autoroute context. As long ago as 1990, most notably, he had transformed a rest area on the Nîmes-Caissargues stretch of Southern France’s congested A54 autoroute. Here, he mobilised a more recent history by rescuing from central Nîmes, the neo-classical colonnade of the Nîmes Theatre (itself, ironically, demolished by Norman Foster), and installing it close to a sanctuary as for a rest area, and providing for drivers and their families a source of relief from the often dangerous and, sometimes lethal, monotony of motorway travel.1

It is interesting to observe that, with the newly opened Stonehenge visitor centre in England, located 2km (a mile and a half) from the famous Stonehenge standing stones, the Australian architectural practice Denton Corker Marshall has, in its competition-winning scheme, essentially followed the same principles set up by Lassus, in separating out the centres of car parking, repose and contemplation from the transportation infrastructure itself.2

Lassus started out as a painter, training in Paris in the 50s under Pierre Francastel and Fernand Léger. By l968, he had become professor of architecture at the École des Beaux-Arts in Paris, where he directed the diploma common to both École d’Architecture de Paris La Villette and École des Hautes Études en Sciences Sociales, the Diploma in Advanced Studies in Garden, Landscape and Territories. In parallel, from 1976 to 1986, he co-founded the École Nationale Supérieure du Paysage de Versailles.This had a revolutionary impact on the hitherto somewhat staid activity that passed for landscape design. Lassus’s period with Léger influenced, even predicated, his movement into architecture and landscape. He has since won a number of international awards and honours.

To understand such an unusual trajectory, one has to observe in particular the introduction of colour in to his projects and installations. His urban project, fully realised at the headquarters of the Colas Corporation in Boulogne-Billancourt,3 could only proceed once the local authority withdrew its overriding interest in absorbing the immediate land for public housing. Colas in due course achieved this modification; the garden design by Lassus was critical in this establishment of acceptability. Lassus had always prioritised social considerations, and the housing authority recognised this mutual compatibility. To mutual advanatage, Lassus bridged the preoccupations of high commerce with those of social housing groups. At Boulogne-Billancourt, that aim could be realised by the latter community whereby Lassus offered all those who populated the place, by day or night, a series of visual solutions that enhanced the common perceptions experienced by all. He deployed such elements as hedges and play areas, with brightly coloured artificial plants in real situations; for example, with clipped false trees, combining tactile and visual experience as opposites, he could make “real” and complement the “game of the seasons”, introducing wintry conditions in contrast to the lushness of summer. Always there is orchestrated by Lassus here the clamour of colour, natural chlorophyll-infused green with contrived artificial green. Always, too, Lassus makes cross-references as such, but never by deceit or feint. Here a state of the “marvelous” as presenting an essential landscape ambience does seem fundamental when introduced by the landscape designer. The viewers, for their part, must become totally involved with the landscape with which they are confronted, whether natural or artificially created – in other words, in the landscape tradition a “sublime” experience akin simultaneously to that of a superb painting and compliant with that overall visual perception. Without his background as a painter, and especially under Léger, this is unlikely to have been formulated by Lassus in quite the same way.

It is to be hoped that such landscape interpretations of context and site, as related to motorway articulation (especially where linked to the values of tourism) can be promulgated, and indeed may replace the profusion of commercial ads that increasingly bombard the driver’s focus of vision in some regions today.4 Lassus has pioneered the process with exemplary success. Back in the Nordic lands, one can even eat elk or reindeer at the stops. Top Gear has nothing on it. 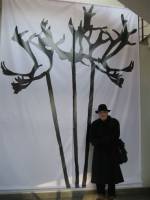 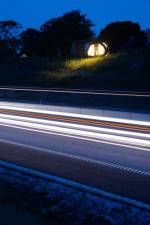