Léger: Modern Art and the Metropolis

Léger: Modern Art and the Metropolis

Two grey figures walk down a set of stairs surrounded by a mass of buildings, fragments of advertisements, railings and bright lights. Space is flat but full of dizzying action – the fractured surface of geometric shapes, bold colours and strong lines pulls the eye across the canvas in a rhythmic motion that starts, jumps and rewinds.

The visual spectacle is overwhelming and it is hard to focus on one object: one is too easily distracted. Such is the experience of viewing Fernand Léger’s monumental work, The City (1919), the inspiration for a fantastic exhibition, Léger: Modern Art and the Metropolis, on view at the Philadelphia Museum of Art until 5 January 2014.

The exhibition begins with work by Léger from the 1910s, exploring the visual progression that led to The City. During that decade, Léger argued for the independence of painting from its traditional role of representation, and proposed instead that it should attain the greatest possible dissonance and “intensity” by means of contrasting shapes and colours. Alongside paintings such as Smoke Over Rooftops (1912) and Houses under the Trees (1913) are works by artists who worked near Léger in his Paris studio in La Ruche before the first world war, such as Jacques Lipchitz, or those who were part of the Puteaux Group (also known as “La Section d’Or” or “Golden Section”), which included figures such as Juan Gris, Robert Delaunay and Marcel Duchamp. The hard lines in Lipchitz’s cubist sculptures, the fracturing of space in Delaunay’s The Eiffel Tower, No 2 (1910–11), alongside his investigations into colour in works such as the marvellous Political Drama (1914), and Duchamp’s evocation of movement in Nude Descending a Staircase (No 1) (1911), all show that Léger’s development was the product of a visual dialogue.

The first world war forced a break in Léger’s career. Mobilised in 1914, he spent two years at the front until he was injured in 1916 in a mustard gas attack and had to convalesce in hospital, finally returning to Paris in 1918. During this time, he often wrote of how he missed the city, and it is not surprising that after the war he turned his attentions to a monumental work based on the subject of the modern metropolis. Although Paris is an inspiration for The City, the painting is more accurately a portrayal of the experience of modern life in any city. Modern architecture and machinery are clearly influences, but so too are the cinema and advertising posters and billboards – the large scale of the painting itself matches both the modest size of a cinema screen at a local theatre and the dimensions of a billboard. Léger believe that for painting to be a peer of the modern city, it had to obey the same laws of artifice and invention that had brought the city into being. In this way, evocations of shopfronts, advertising posters and the detritus of the everyday find themselves in compositions such as The City and later works such as Composition with Hand and Hats (1927).

After The City, the exhibition opens up into a large room filled with objects: the tall walls are covered in paintings, drawings and prints; posters are suspended from the ceiling; and the reimagined sound-track to Léger’s only film, Ballet Mécanique (1923-24), fills the space with the whirling of wheels and turbine engines, bell and horns. It is an installation that mimics the spectacle of the modern metropolis as experienced by Léger. The objects jostle for attention, but the overall effect is mesmerising.

In the early 20th century, artists embraced cinema, and more specifically the movie camera, as a means through which to capture the modern world and also as a new way to explore it. The movie camera extended sight, it changed not only the way the eye could see, but experience the modern world. As an artist, Léger had a keen sense of time and movement, as seen in both Ballet Mécanique and his designs for the Ballets Suédois in 1921 and 1923 (which are also on view in the exhibition in the section devoted to theatre). His film is a true dance in which the motion of machines is structured through the use of rhythmic montage, cuts and tight camera angles.

A highlight of the exhibition is the section devoted to theatre and, in particular, the installation of Léger’s costume designs for the Skating Rink (1921), which standin front of a reconstruction of a backdrop for the ballet in the 1960s. As the curator, Anna Vallye, explains, Léger found classical theatre, which privileged the playwright’s works and the actor’s performances, obsolete. Instead, he dreamed of a “public stage” that would combine circus, fairground, variety show, dance and cinema. The ballet Skating Rink takes place in an urban skating rink and is based on the Charlie Chaplin film The Rink (1916). Chaplin was incredibly popular in France (and the rest of Europe) and was the inspiration and subject of several works by Léger and other artists. Although Léger was only responsible for the costumes and sets for the ballet, he ultimately influenced even the choreography as his costume designs dictated the steps of the dancers, allowing them to make only rigid and angular movements. Thus, in a sense, the dancers became mobile scenery. But more importantly, here Léger found a collaboration that allowed him to translate his visual evocations of rhythm, as seen in his paintings, into a physical three-dimensional space and to begin an experiment with movement that would find its way into Ballet Mécanique.

Between 1924 and 1926, Léger created a series of abstract mural painting inspired by the modern vision of space, and the final section of the exhibition is devoted to the influence on him of architecture and contemporary architecture theory. Here, there are examples of paintings, drawings and maquettes by Le Corbusier and Theo van Doesburg, both of whom were friends of the artist. Léger never branched into architectural design himself, but the closest he came to this was in his set designs for the 1924 French silent-film L’inhumaine. In this science-fiction drama, a famous singer, Claire, is being courted by two men – a maharajah and a scientist. Unfortunately, the maharajah discovers there is another man and kills Claire, who is later brought back to life by the scientist. The most spectacular sets are those of the scientist’s laboratory, which is divided into angular blocks and whirling disks, much like a Léger painting brought to life.

Léger created more studies for The City than he normally did for his paintings, including sketches on paper and canvas (all 14 studies are reproduced in the catalogue, but only three are on view in the exhibition). This work obviously consumed him, perhaps at times even frustrated him, but at the end of his life, he referred to it as one of his greatest works. The exhibition at the Philadelphia Museum of Art helps both to recreate the atmosphere that this work was born out of and to explore the larger importance of the metropolis, as a vibrant and chaotic realm of urban spectacle and industrial progress. 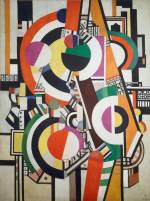 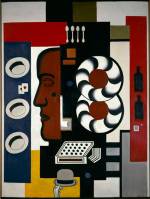