Book review: The revision of the modern: seeking the real narrative

The revision of the modern: seeking the real narrative

Sadly, this important study was published just before the author’s untimely death earlier this year. Paul Overy was a well-recognised author dealing with 20th-century art and architecture

Overy’s publications over a long career included books on the de Stijl group, Wassily Kandinsky, Norman Foster, and the architecture and furniture of Gerrit Rietveld. Stricken by a terminal illness in his closing years, it was appropriate that he chose as his last study the subject of modern architecture between the wars, with a special focus on the health agenda which drove so much of it. An architect colleague of this reviewer readily recalls how while being wheeled into the operating theatre the stretcher he occupied halted momentarily while he was given his anaesthetic injection; but instead of this being a dark moment he found himself under a circular roof light, through which he could see clouds and blue sky: this was a memorable moment instead – in a white, well-lit space – a small but reassuring paradigm of modernism.

Light was, of course, a motivating element in the 1920s and 1930s, and never was this more relevant than in the substantial body of architecture which defined modernism and the modern movement between the wars. In particular, where new buildings for health were concerned, social agendas began to initiate new building types: hospital sanatoria, rest homes, and eventually new forms of housing and apartment buildings which had an emphasis on individual family open space.  Overy provides a full survey of such a distinct range of socially useful architecture, as defined by actual social purpose, rather than has normally been the case in taught architecture, from the aspect of formal and technological innovation. Overy was interested to go further back in defining the point of social motivation of such innovation. This represents something of a break with the conventional litany of modernism, whether as developed by Sir Niklaus Pevsner, the art historian, or P. Reyner Banham, his student and the ultimate historian of early modernism. This strand applied art-historical criteria rather than social contextuality.

In such a study as Overy developed, he pursued a complete survey, as here, of the emergent new typology of health buildings. Regrouped in this way, architecture reveals a distinct range of socially qualified buildings; hygiene and cleanliness became paramount. In housing there were of course such examples as the Karl Marx Hof in Vienna; Peter Behrens emerges as an important catalyst. Before the war he employed Walter Gropius, Mies van der Rohe, and Le Corbusier for limited periods in his Berlin office. For example, Overy shows how, early on, Behrens favoured roof terraces in apartment buildings, but these were intended for executive workers: only after the war, in the 1920s, did the health focus turn to fighting tuberculosis, and so Behrens turned to social priorities. Later on he was, as Overy finds, one of the only architects engaged in the Stuttgart Weissenhof scheme to accept health as an urgent domestic priority. Social democratic politics also played a significant role. Overy shows how such journals as Die Form, the Werkbund journal, came to promote such priorities.

The research focuses more on Dutch and German prototypes of the architecture of health. Purely stylistic ventures are given short shrift by Overy. He has been held to 66 illustrations, which show adequately the case which he describes, although more would have been useful, including plans and sections. The book is clearly structured, dividing into five chapters: ‘health’, ‘home’, ‘sun’, ‘water’ and ‘factory’, plus an introduction and conclusion. Certain key preoccupations precede our contemporary concerns over ‘cleanliness’, ‘sun and the outdoor room’ and ‘water’, from a period when such diseases as MRSA seem not to have been identified. Sun as a cause of skin cancer is not heeded. Indeed, the book throughout displays a kind of innocence, which was characteristic of the period between the wars.

The star British building is the De La Warr Pavilion in Bexhill-on-Sea, which Overy rightly classifies as a ‘sanatorium by the sea’. Alvar Aalto’s Paimio Sanatorium is included, plus the information that Aalto had visited the very similar Zonnestraal a year prior to receiving his commission. The information that the seventh floor had to be closed off owing to its tendency to precipitate suicides over the balcony rail is not much known.

In terms of British developments, the prominent commentator Philip Morton Shand merits more recognition for his ceaseless efforts to introduce modern architecture to Britain in the 1920s and 1930s. Health buildings were not, however, his primary concern. Overy rightly shows how central the subject was in the shifting sands of the inter-war years. This is a timely study at a time when the architecture of health is receiving new attention, and no less than recasts the lost history of modernism in an appropriate form. 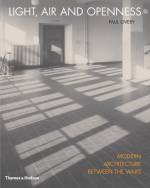