The Thinking Hand: Essential and Embodied Wisdom in Architecture

The Thinking Hand: Essential and Embodied Wisdom in Architecture

Last autumn I had the privilege of joining the 75th anniversary celebrations of the opening of the famous city library of what was once Viipuri in Finland (karelia) ceded to the Soviet Union post war, now Vyborg in the Russian Federation. This seminal early work of Alvar Aalto suffered much through the vicissitudes of the northern war but as once thought was not destroyed, neglected, but it survived to return to library use though but a shadow of its former self.

Over the last 15 years, fronted by the efforts of the Alvar Aalto Foundation, the formation in 1995 of a joint Finnish Russian restoration committee and with the support of many architects world wide, much restoration of the fabric and some individual spaces has been achieved – the celebration included the re-opening of Aalto’s lecture room, so well known for it’s lengthy undulating timber ceiling, now immaculately restored. Truly fabulous!

One of the distinguished Finnish protagonists involved in the restoration project is the author of this important book, Juhani Pallasmaa, architect, architectural thinker, lecturer and author. By coincidence, at the time of my visit, I was reading The Thinking Hand and found it a timely and searching exposition of issues that I was in some way mulling over myself, especially the neglected act of drawing in architectural procedures. Pallasmaa’s sub-title is Existential and embodied Wisdom in Architecture. Puzzling at first, I took this to be about all that might be classified as non-cognitive in the creative process – the act of drawing and the almost autonomous life of the hand. This is a wide-ranging and serious exposition, which I read and appreciated perhaps, without full understanding, but with considerable enthusiasm and some recommendation.

Asked to review it, followed an in depth re-read, furthering understanding of the argument and outcome. The theme is developed through an introduction and eight chapters wide ranging through the specific territory of creativity in architecture and design. Topics (summarised) embrace “the mysterious hand – manifold aspects; The working hand – the hand and the tool; Eye, hand mind fusion – experimentation; The drawing hand – drawing and the self – the computerised hand; Embodied thinking – amongst other things thinking through the senses; Body, self and mind – the body as site; Emotion and imagination – the gift of imagination, reality of art; Theory and life – opposition of theory and making … architecture as Image of life”.

The author makes it clear that he draws on ideas and formulations developed in many of his former lectures, delivered in many places and indeed each chapter could be a stand-alone essay. In many places he supports or replaces his own formulation of ideas with parallels from many distinguished sources in the arts and sciences – judicious illustrations likewise reinforce the message and both meld well within each chapter. There is a certain re-iterative quality in each chapter but with different emphasis, and taken all together, they build up into a cogent critique of the dominance of the sense of vision in today's technological culture and the need for a multisensory approach in the arts and architecture.1  Thus, “the hand has it’s own intentionality, knowledge and skills”

To my mind Chapter 4, (The drawing hand) is the most pertinent and one to which I have returned. It offers a considerable argument for the importance of drawing in the creative process, “the line traced by the hand is a spatial one: placed in a distinct perceptual or imagined space with expressive richness and emotive life … in contrast to the computer’s emotionless factuality of mathematical space”. But be assured Pallasmaa is very much in the real world.

Here I am reminded of an account by one of the senior staff of Frank Lloyd Wright at work: apprentices standing around with sharpened coloured pencils at the ready, while the Master drew, a laconic line or two at first, more tracing paper sheet after sheet – successive layers – until there was a full graphic realisation of a complete building.

There is a high word count for existential, occasionally perhaps not essential but there comes in Chapter 5 an attractive and lucid employment thus "In addition to operative and instrumental knowledge the designer and artist need existential knowledge moulded by their experience of life." Lightly, one might say the author is too quotable but withal for this reviewer there is a perceptiveness, which runs throughout, ideas and reflections, to use his own words, the train of thought becomes embedded, even in the hand and maybe available covertly when needed as one engages with design tasks at many levels. I commented that the chapters might be stand-alone: though each can be read in its own light they compound together into a greater whole, the image of buildings that show our technological and professional knowledge and skills are not enough but need to be nurtured in a deeper consciousness, embedded from other sources which are less material.

Thus, to conclude, there is much to ponder and much to enjoy in this text as well as the illustrations, perhaps to argue, and develop. Personally, I would like to see it become a set book in architecture courses alongside such imperative authors as Gombrich, Wittkower, Summerson, Banham, Watkin and the like, not forgetting Le Corbusier’s, Vers une Architecture.

Postscript
Reading around Scandinavian culture generally I came across in “the soul of the north” (Neal Kent, Reaktion Book,. 2000) reference to Finnish Primary Education. Conceived by the Pastor Uno Cygnaeus (1810–1888). This was in the period when Finland was a Duchy of Russia under the reforming Alexander 11. The primary school system became law in 1881. “Crafts” was a mandatory subject at this level and is, I understand, still so named (“sloyd”). Seemingly a potent factor in Finnish design eminence.

1. In this context I quote from a letter by Professor Peter Blundell Jones (ARQ, Cambridge, Vol 10 No 1, 2006).  “The illusion of 'cad' fly-through takes us no nearer at all, for it remains monocular and perspectival and there are no feet to feel the ground or muscles to exert on the stairs. The bodily imagination is simply not much engaged: it is a couch-potato view of the world, and we should not be surprised as buildings become increasingly like the sets for TV shows.” 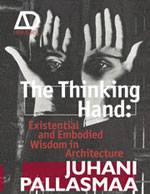