45 years ago, Alvar Aalto was commissioned by the Nordic Council of Ministers to design the Nordic House, a cultural centre in Reykjavik, aimed at fostering cultural connections between Iceland and the other Nordic countries. To visit the building today is to be reminded how proficient this leading modern architect had become in purpose-built design, and in contemporary terms how sustainable, from one who led the reform of modernism at the time to a more humane idiom.

Sitting exposed amongst elf-inhabited marshlands in the centre of Reykjavik (according to the Icelandic), the Nordic House epitomises simple Nordic pride. The building is smaller than expected, buried into the man-made marsh rather than dominating it, and designed proudly to complement the surrounding landscape. Being quite isolated, the low level white-rendered façade reinforces the nature of the immediate site. The flat rectilinear roof has an organic angular form protruding from the middle, hinting towards functions that go on inside as well as making reference to the neighbouring mountains. The colour of the glazed ceramic tiles lining the angular form of the building further reinforces the surrounding dark blue tones of the mountains.

Upon entering the building, you are as in the majority of his buildings, immediately placed at the centre of all activities. The entrance foyer acts as a courtyard to all services that tier off from the central space. The foyer has a subtle mixture of artificial and natural lighting, fitted out with cylindrical skylights above – first used in Aalto’s Viipuri Library (1930). From this main space you can get to the cafe, auditorium and library uninterrupted nor questioned by staff. This occurs in many Aalto buildings: you are encouraged to explore, the use of brick as floor finish leading you into new spaces in the case of this Nordic House. The more private and official spaces used by staff are situated towards the back of the building or accessed by separate entrances.

One is constantly reminded that this building at the time of my visit is indeed almost 45 years old. Although relatively young in historical terms, for a building exposed to many harsh Icelandic winters and with very low-tech materials being used, it is surprisingly in fine condition. The materials used are certainly sustainable.

Arguably, the Nordic House has aged gracefully because of the deep understanding of such materials, which Aalto had developed over his career. Although not written about extensively, there is evidence to suggest that this is the case. Most notably, at his Summerhouse in Muuratsalo, (also known as the experimental house) Aalto experimented with brick within the external courtyard by juxtaposing different brick types in various configurations to play with aesthetics as well as allowing himself the opportunity to observe subtle physical changes that may arise. This is of course, one small example of only part of a building but we can see that while Aalto may not ultimately control all the results of a building over time, by setting up personal studies, he enabled himself the opportunity to make a conscious effort to better understand how materials reacted, weathered and looked adjacent, to and alongside one another. The results of which, could then be learned from to ensure that the application of specific materials within future projects could be done so with more predictable results.

As architects, we are always looking towards the physical fabric of a building to assess the impact time has had on its aesthetic and condition. During my visit, there was a lot of activity for a Saturday morning. The building was in good use, busy even, with children continually entering to get to activities taking place in the lower level of the library. There was also a conference being held in the auditorium – a multi-purpose space just off the upper section of the library. It is a real test of the building, proving that it should not just be the condition of the building, which decides anyone’s personal opinion on the success of a design but also about the way in which it continues to be used.

Aalto’s approach may be better understood through his statement: “Do not judge my building on the day it opens, but in 30 years time.” His intention in design went beyond rationalising form and material alone. He worked with and placed value on that element of design that was out of his control; time. Looking back upon that initial aspiration – the Nordic House being one of Aalto’s later works – one can see parts of this building that refer to previous designs, where lessons have been learnt, repeated and expanded upon. It also remains to be one of Aalto’s youngest built works, contributing to the overall current condition and success of the design. At the point of his career when the Nordic House was designed and built, from 1963–68, Aalto had a well-established approach, understanding and balance in his response to site and function, which perhaps is what contributes towards such a timeless design with a feeling of permanence. 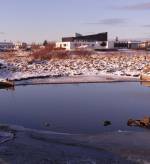 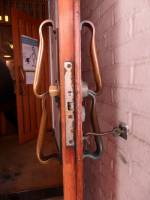