What better venue could there be for an exhibition of the work of Erich Mendelsohn than the De La Warr Pavilion in Bexhill-on-Sea, England, which he designed with Serge Chermayeff in 1934? All in white, with a south-facing façade containing two long rows of big windows, a balcony, flat roof and the sweeping curves of a dramatic, two-storey stairwell facing the sea, the pavilion sums up what many people associate with Mendelsohn: the pure, clean lines of a building filled with light (even in England!) that epitomises the Modern International Movement.

Go inside, and one of the first exhibits is a model in white of the Einstein Tower, which he designed in Potsdam in 1918 (it was completed in 1924). It reflects the more famous aspect of Mendelsohn's work: his expressionist sketches, many drawn on the Russian front in the First World War, showing factories, warehouses and other buildings whose forms were inspired by a Bach toccata or the upward plumes of mud from shells that exploded on the battlefield in front of him. Amazingly, such sketches were also the inspiration of the Einstein Tower, which was designed to house scientific instruments. It required naval engineers to transform these visions into working drawings.

There are several notable things about the exhibition. First, as his later buildings in Palestine and America show, he was much more than an expressionist architect. Second, given his design of the Petersdorff and Schocken stores in Breslau, Chemnitz, Berlin and elsewhere, he was one of the most important architects working in Europe between 1925-30, during which time he mastered the internal planning of the department store and the use of artificial light to create streamlined effects at night. And third, he was then a cosmopolitan architect, as well as one who was widely travelled, meeting Frank Lloyd Wright and Fritz Lang when he visited Taliesin East in 1924.

For Mendelsohn, the flight to England to escape Hitler in 1933 marked a downturn in his fortunes because - apart from a house as well as the pavilion - commissions were few. As a result, he established a short-lived practice in Palestine. The exhibition includes a hospital and an agricultural college completed by the practice in 1939 and 1940. From England, Mendelsohn travelled to the States, lecturing at Yale, Detroit and Berkeley, ending his days (in 1953) teaching at the University of California and designing a laboratory for the Atomic Energy Commission. Professionally, this may have seemed an anticlimax.

In the exhibition, his buildings are grouped into categories, such as factories, offices, department stores, buildings for exhibitions and events (including a cinema), Jewish commissions and houses. Each category contains his initial sketches, plans and elevations, black and white photographs of the interior and exterior, and some of the buildings are accompanied by unpainted, wooden models that were made by German architectural students a number of years ago. As the models are unidentified - you have to read the drawings to know which of the buildings they represent. It is an extremely comprehensive presentation.

There are two other exhibitions currently on display at the pavilion: 'Motion Path' and 'Bridget Smith: Rebuild'. The former is a small scale, 12-screen video shot by Graham Ellard and Stephen Johnstone in four of Mendelsohn's buildings that uses a specific repertoire of camera moves to register how an object appears to change when the viewer alters his position. Featured are sinuous handrails, spiral staircases and the shifting sightlines provided by canopies and walkways. Thus, the buildings are experienced through changing vistas, voids, solids, reflections and apertures.

'Rebuild', on the other hand, is more conventional and shows the rehabilitation of the De La Warr Pavilion in photographs taken by Bridget Smith in 2003. She records her emotional response to its renewal rather than simply documenting facts, so most of her photographs show empty spaces, a few visitors or the abstract shapes of walls in the process of change.

'Erich Mendelsohn: Dynamics and Function - Realised Visions of a Cosmopolitan Architect', 'Motion Path' and 'Rebuild' continue until 2 July 2006. The Mendelsohn exhibition was curated by the German cultural organisation, ifa. 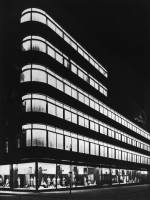