A new building for St Catz

A new building for St Catz

Walking around Oxford today, it is remarkable how little the centre of the city has changed in the last 50 years. The sweeping curve of The High, punctuated by the single tree in the garden of All Souls College, remains as impressive as ever, as do the curves of Longwall and Holywell Streets, the grandeur of The Broad and the spaciousness of St Giles with the Martyrs' Memorial at one end and George Edmund Street's neo-Gothic church at the other. Yet Oxford is full of postwar buildings, many of which have been extremely well designed and integrated into a much older fabric; and the success of this development in a city whose undergraduate population has doubled since 1945 (it now stands at around 14,000, not to mention the other 15,000 who study at Oxford Brookes University, which was founded some 30 years ago) owes a lot to the fact that much of Oxford's land is owned by individual colleges or the university. Many of the colleges also have playing fields close to the city centre. The latter have provided space for new libraries, laboratories and other facilities - as well as for St Catherine's College (or St Catz, as it is known to all who are associated with it).

St Catz was founded as the non-collegiate St Catherine's Society in 1868, to serve locally based undergraduates who could not afford to live in college and remained without undergraduate accommodation until 1962, when the first of a new set of college buildings opened. The college, which was completed in 1964, was the brainchild of Alan Bullock, formerly Censor of St Catherine's Society and then Founding Master of St Catherine's College, who led the campaign to raise money for the new buildings. These were designed by Arne Jacobsen - his appointment without even a competition caused an outrage in Oxford. However, Lord Bullock and his team had visited new buildings that were going up in Britain in the late 1950s and, seeing none that they liked, had visited Denmark to see work by Vilhelm Wohlert, Jacobsen, CF Moller and Jorn Utzon. It was Jacobsen's design of the Munkegard School in Vangede and of Rodovre Town Hall that led to his appointment. His first action was to ask for plans of all the colleges in Oxford.

The new college was built on a 3 m grid that was applied as rigorously to its landscape as to its buildings, and was uncompromisingly modern in its architecture. Two long blocks containing two floors of undergraduate accommodation, above Fellows sets and other facilities face each other across an enormous quadrangle which is completed by the Hall, senior common rooms, junior common rooms, kitchens and offices on one side, and the Wolfson Library and Bernard Sunley Lecture Theatre on the other. The library and lecture theatre are separated by an asymetrically placed bell tower.

Beyond these are the Music House, the squash courts and gym, the former situated very close to a medieval water mill belonging to Magdalen College. The mill stream (in effect, a tributary of the River Cherwell) marks the western boundary of the St Catz site, and land around the mill marks the southern boundary. The eastern and northern boundaries are marked by playing fields belonging to Merton College.

The tight constraints on the St Catz site are important because, in Jacobsen's design, the western-facing accommodation block also contains the original entrance to the college with its Porter's Lodge facing a narrow moat, beyond which is a long lawn. At the northern end are the Master's Lodgings and beyond that garages, a circular bicycle shed and the octagonal Music House, the only non-rectangular building in Jacobsen's design. But, because there are privately owned houses on the other side of the mill stream in Manor Place, people going to St Catz could never walk straight into the Porter's Lodge as they do in most Oxford colleges which face the street. Instead, they reached the entrance from Manor Road by crossing a small bridge over the mill stream and then turned right, passing garages, the bicycle shed and the Master's Lodgings before turning left to reach the Porter's Lodge via another bridge over the moat. This situation has now changed.

As Jacobsen's buildings are on land, which at one time had been subjected to flooding, he put them on a tabula rasa - a foundation that echoed Mies van der Rohe's ideas, and in Oxford, Mies's influence on Jacobsen is quite clear. Some time after Jacobsen's buildings were completed, there was an opportunity to add new buildings to the north - the Alan Bullock and Mary Sunley buildings designed by Jack Lankester, the surveyor to the university (in effect, the university's architect) who had worked with Jacobsen. Sir Philip Manning Dowson was also called in to improve the spaces around the entrance to the college.

However, the acquisition of further land from Merton College, situated immediately to the north of the lane that runs from Manor Road to Merton's playing fields to the east, has given St Catz the opportunity to build three sides of a second quadrangle facing the Alan Bullock and Mary Sunley Buildings. The first (western) side of the quadrangle was completed in 1995. The northern and eastern sides of the quadrangle have just been finished.

The purpose of the second quadrangle is to provide a further 129 rooms so that St Catz can now provide accommodation for 80% of its 330 undergraduates. It can also accommodate 15 postgraduates elsewhere in the city. There is a separate block at the eastern end of the quadrangle known as the Arumugam Building (which is diagonally opposite a modern punt house that is set at an angle between the western and northern blocks) that contains the relocated Porter's Lodge on the ground floor and seminar suites on the two floors above. The Arumugam Building is visually different from its neighbours because it is fitted with exterior louvres that reflect those fitted to the Bernard Sunley Lecture Theatre.

What distinguishes the new quadrangle, designed by Hodder Associates, is that it echoes but is noticeably different from Jacobsen's residential blocks. Additionally, because the western side is staggered to follow the line of the mill stream (and in fact is set at 30 degrees to Jacobsen's grid), the composition introduces a variety of different angles to the right angles that dominate Jacobsen's composition. It is as if someone had followed Mondrian's rules by keeping the straight lines but arranging them on a slant.

Hodder's residential blocks retain the full-height wall glazing seen in Jacobsen's residential blocks, as well as the narrow (Roman) buff-coloured bricks with their immaculate layering. (In Jacobsen's day, Danish brickies were brought in to teach Oxford brickies how to lay a straight course and several walls were torn down and rebuilt.) The buildings are on concrete piles and have a greyish-white concrete frame with concrete slabs used for the ceilings and concrete tiles or light grey carpets on the floors. Steel frames secure the glazing, which is used together with fixed aluminium panels, but unlike Jacobsen's blocks, double glazing is used and incorporates venetian blinds. (This had been Jacobsen's original intention but cost limitations set by the - then - University Grants Committee forced him to use single glazing and net curtains. Both are now being replaced.) The rooms are furnished with Jacobsen's Series 7 chairs, and desks and wardrobes by Hodder Associates which, together with the panelling used in parts of the buildings, are in maple. The Porter's Lodge has a long, maple reception desk and a new, low-backed version of Jacobsen's Oxford chair which has recently been introduced by furniture manufacturer, Fritz Hansen.

In designing the new buildings, Hodder Associates followed Jacobsen in keeping to the Oxford tradition of having sets of rooms off communal stairs (instead of rooms off corridors along each floor) and, as with Jacobsen's design, each staircase is provided with small pantries intended to be used for making tea, coffee and light refreshments. However, undergraduates no longer have to eat regularly in Hall (in the 1950s, St Catz undergraduates had to dine in Hall three times a week where they wore gowns and were waited on by college servants). Indeed, so casual has life become that Hall serves buffet meals and a notice reminds everyone that they must wear shoes! But the change in lifestyle means that many undergraduates now cook their own meals - and the pantries are inadequate for this. So it could be argued that an opportunity has been missed to bring the catering facilities in the new residential blocks up to date.

In one other respect, however, the new quadrangle is in keeping with the 21st century: it is the only one in Oxford to provide purposely designed car parking. Gone are the days when only the rich undergraduates and a few dons owned cars, and the closure of streets in the centre of the city and park-and-ride facilities on the outskirts attempt to deal with a major urban problem. The part of the quadrangle set aside for cars will be screened by cut privet trees which is just one of the latest developments of the policy to integrate St Catz's buildings with their landscape.

In Jacobsen's original design, the idea was to use the lawns and trees to bring out his immaculate brickwork, so the overall colour scheme was based on browns and greens and the college was offset by many unusual trees - a cedar of Lebanon in the quadrangle plus Judas, Indian, strawberry and mulberry trees, Douglas firs and weeping conifers (among others) in other parts of the gardens. The mill stream, of course, has its willows. There are also areas in which the 3 m grid is marked out by yew hedges. However, as time has gone by the gardens have become more English, with herbaceous borders planted in the Fellows' garden, for example, and colour added elsewhere.

The completion of the second quadrangle, however, means that there is a chance to create a new entrance to St Catz by creating a roundabout (probably defined by a St Catherine's wheel in brick) in the lane close to the Porter's Lodge. Furthermore, by removing a wall and a beech tree adjacent to the Mary Sunley Building and sowing a lawn in front of the eastern buildings of the new quadrangle, a visual link will be established with the lawn between the moat and the Master's Lodgings. In this way, it is hoped to link Jacobsen's buildings and Hodder Associates' additions more closely together, despite their being separated by the lane leading to Merton's playing fields.

Richard Carr graduated from St Catz in 1959, after which he watched Jacobsen's buildings going up with great interest. 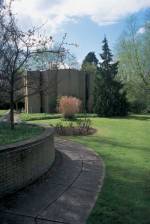 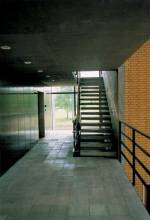